It's funny, I started out doing this on a lark, really.  I figured it'd be fun and I really thought, still think, that the things I've documented these last three years are, by and large, funny.  Misspellings and limbless heroes and hairbrainage and dumbfuckery, nonversations and illogical truths, a blue jet (my first post) or a rocket boy, and so much more, all of it, laugh out loud funny.  Cute, even.

That's what got me started and, frankly, it was pretty easy.  There was an endless supply of fodder from take-home folders and home crafts, notes and valentines and cards and dioramas and owl projects and pictures in the sand, there still is, as I'll soon prove.  But, and this is important, something else happened, something profound.  The silliness and the humor and the spontaneity of it all began to pull back the curtain and reveal deeper feelings, show deeper truths, feelings and truths I began to see waiting in the stories hoping to be told.

A story is a hope, isn't it?  I laugh at myself sometimes because I think I tell the stories, that I am the one so cleverly manipulating the words, painting the paragraphs, inventing the narrative.  One is never the master of a story though, it has been waiting and we tell it.  Sometimes the story lets you think you are in charge, but, you never really are.

So, as I teased Nick for beautifully, diligently, perfectly misspelling so many words, and marveled at Zack's profound non sequiturs, I began to see this stuff within the story being told.  I think childhood should be a story of hope.  What is weird, though, is that as I told their stories they got all wrapped up with mine and I could see that it was just one childhood, theirs, mine, yours... ours.  Sometimes it seems like one small story is the whole story because there is more before and after whatever part we choose.  Left to its own devices, given an audience and a way to be told, any story could be the one story, telling us everything we need to know.  Maybe...

That long intro was, a while back now, designed to make a point.  Showing a cute and funny picture and making a few jokes about it is, actually, pretty easy and, not too time-consuming - lazy it could be argued.  Listening to what an image or object or a memory, even, has to tell me takes time.  The hows and whys and "what if"s and "what about"s need me, ask me really, to consider them.  And, I do.  What I am trying to say is that I don't post here as frequently as I once could because it takes more time than it used to.  I guess I just shoulda said that in the first place.

For instance, these two owl projects the boys did as a big "graded" project last year - third grade - have been sitting in the back of the closet in my room for a while now.  I don't want to throw them away, but I have to.  I can't save everything, every memory and moment, every story, long or short, every scrap and swirly sun.  But, perhaps here I have trapped the key to the door of this memory and with it the whole story may unfold, the story of learning to learn. 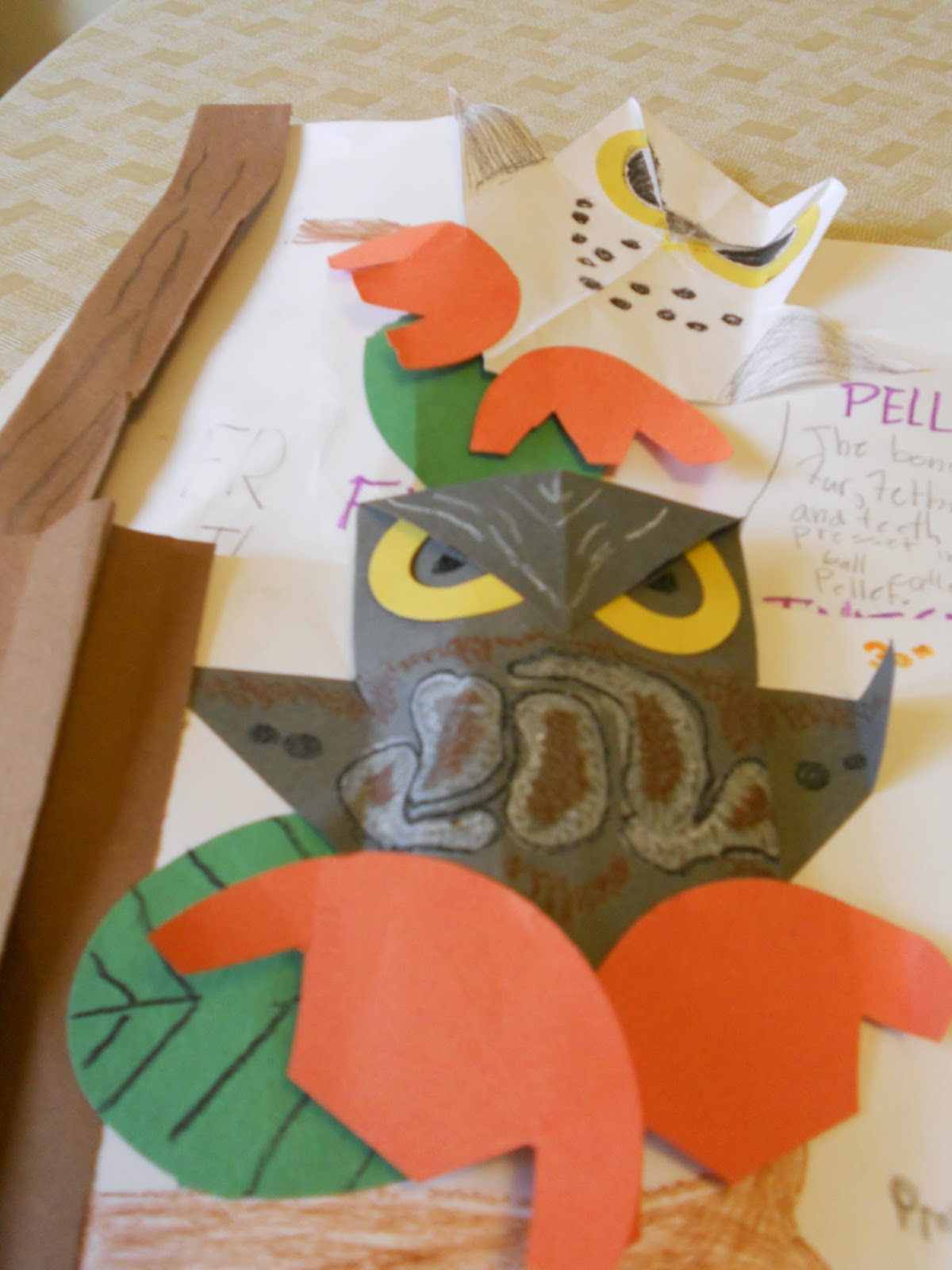 I threw them in to the recycling, it had to be done.


This is a picture I took of a black shirt, black pants, I white stained polo shirt and two unimaginably small book bags. 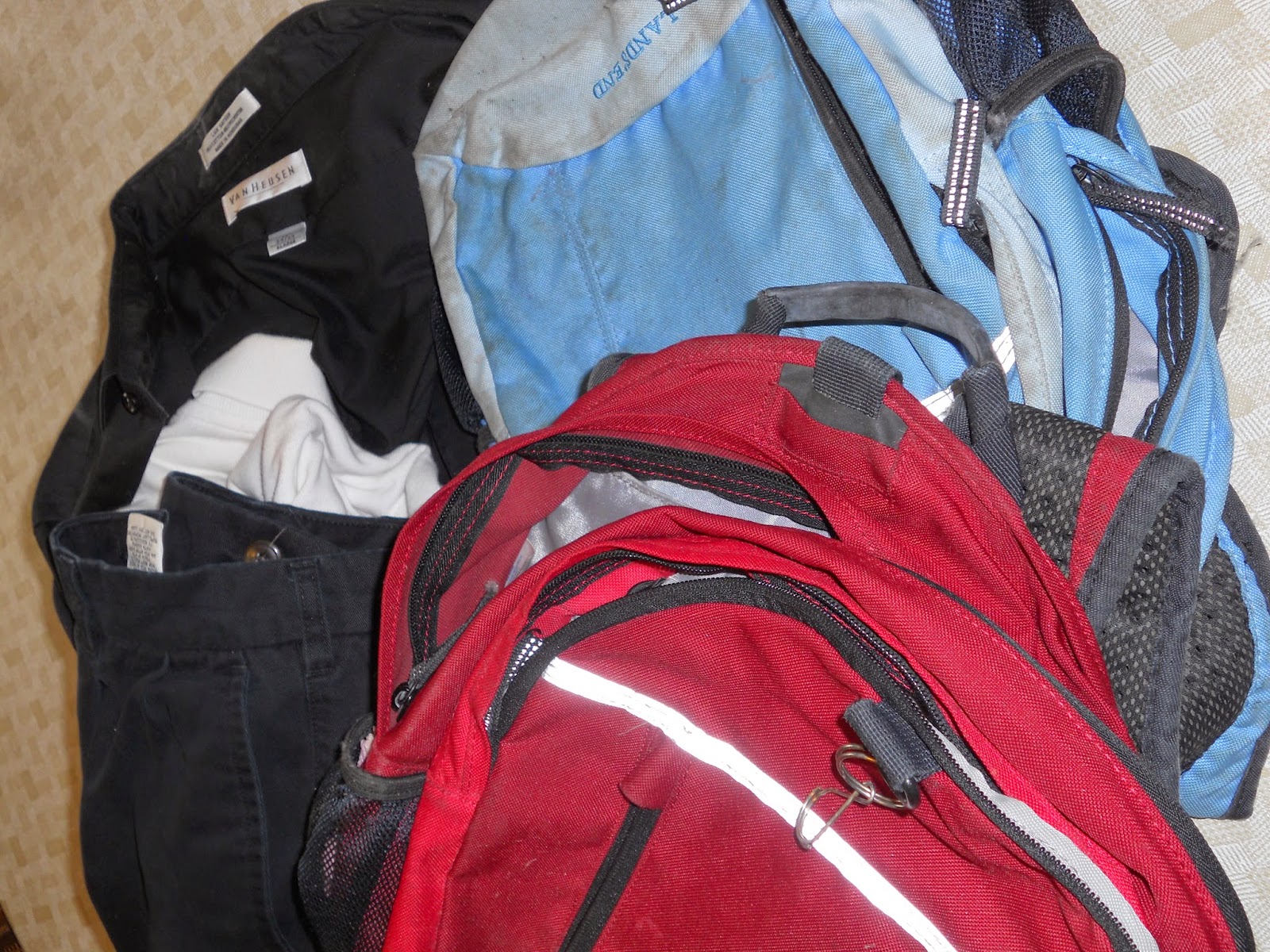 Why would anyone take this picture?  Well,where should I begin?  In the first restaurant I ever worked in, or the twentieth, or the last?  In tuxedos or waiter jackets or white shirts and thin black ties?  That wouldn't make any sense.  I could begin with the reams of school work and projects and pencils and crayons and notes and nonsense I have pulled out of those little Land's End backpacks.  Kindergarten, first and second - times two.

Good stories both, but not the one that came to me.  All that stuff, old work clothes and two beginner book bags - worn for an eternity in childhood years - all of it together, was bound for the donation pile.  I'd found both in my closet when I cleaned it out because the owl projects were being crushed - in true "If You Give a Mouse A Cookie" style.  I walked by it all, stacked haphazardly, literally tossed away, and I looked at it hard and wondered why it was so compelling.

"Endings," I said to nothing, to everything - I'm never sure which - and I smiled.

Two, seemingly random items, together, whispered to me a singular truth, a sad truth, a truth that stories all tell, for end they do, there must be endings.  I worked a lifetime in uniforms and black pants and white shirts, thirty-plus years, and that pair of black pants and that black shirt was the last uniform at the last restaurant job I ever intend to work.  The book bags are not going to be missed, they were the first of dozens to come, but I couldn't let go of them, which is why for some years now they've been taking up room on the dusty floor of my closet.

Giving those bags away, letting them go; donating the uniform, letting that story close are both endings.  An end to what had once been my career, the end of toddlerhood and elementary school innocence.  A final goodbye to a thousand freindships, farewell to carefree childhood.  These things are over.

It is all donated now.


The two pictures here are pretty straight forward.  The boys built towers on a table in the guest room.  They are as different as the boys themselves and a pretty accurate shot of how they look right now.  So, I should just leave it at that.  I could, I might have a few years ago.  But, I don't want to just remember the things they built, I need to remember why they built it.  I need to remember why Nick made a face and why Zack is crouching on a stool.  I will now, I guess I don't have to tell you, for the time being at least. 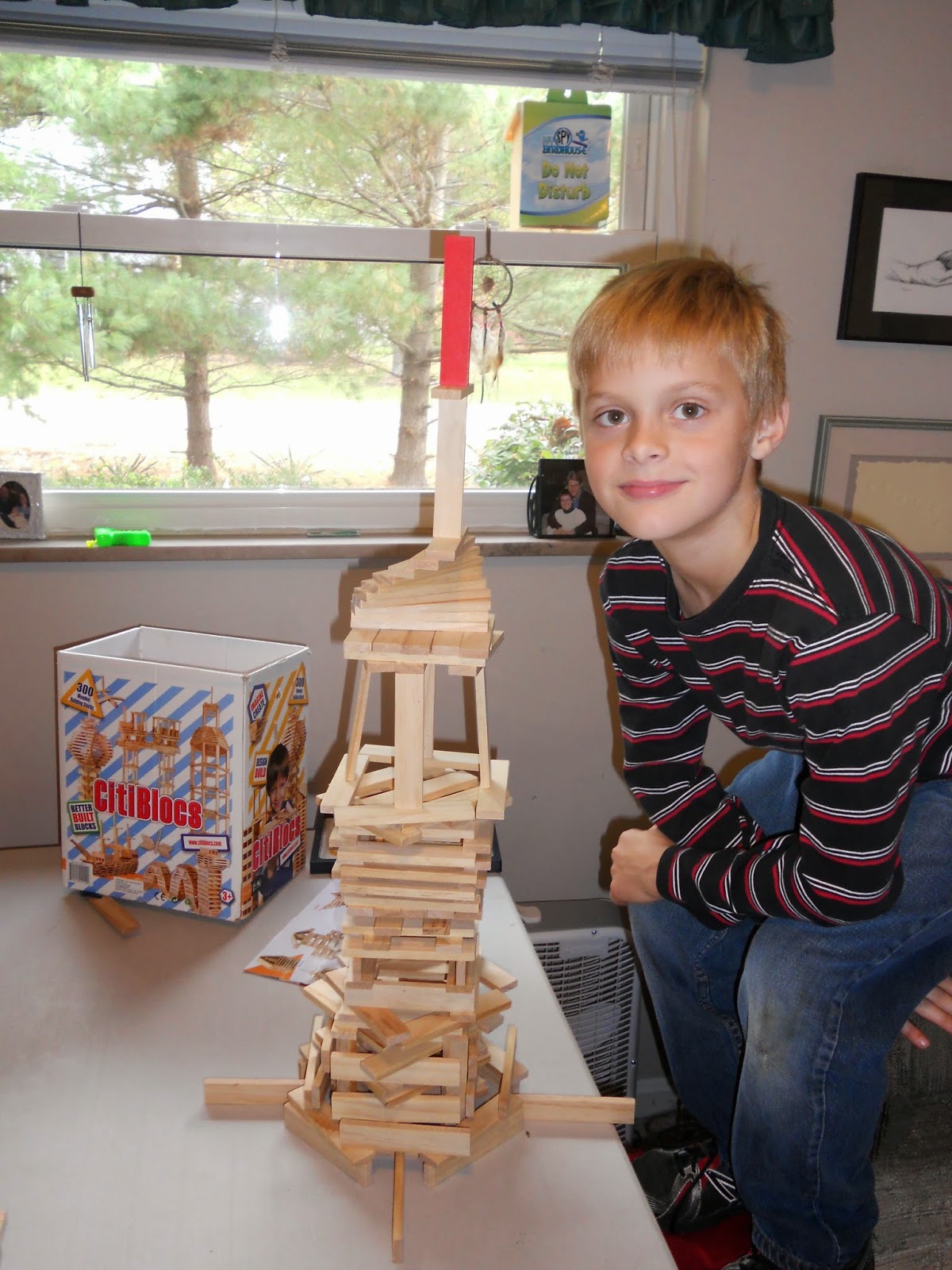 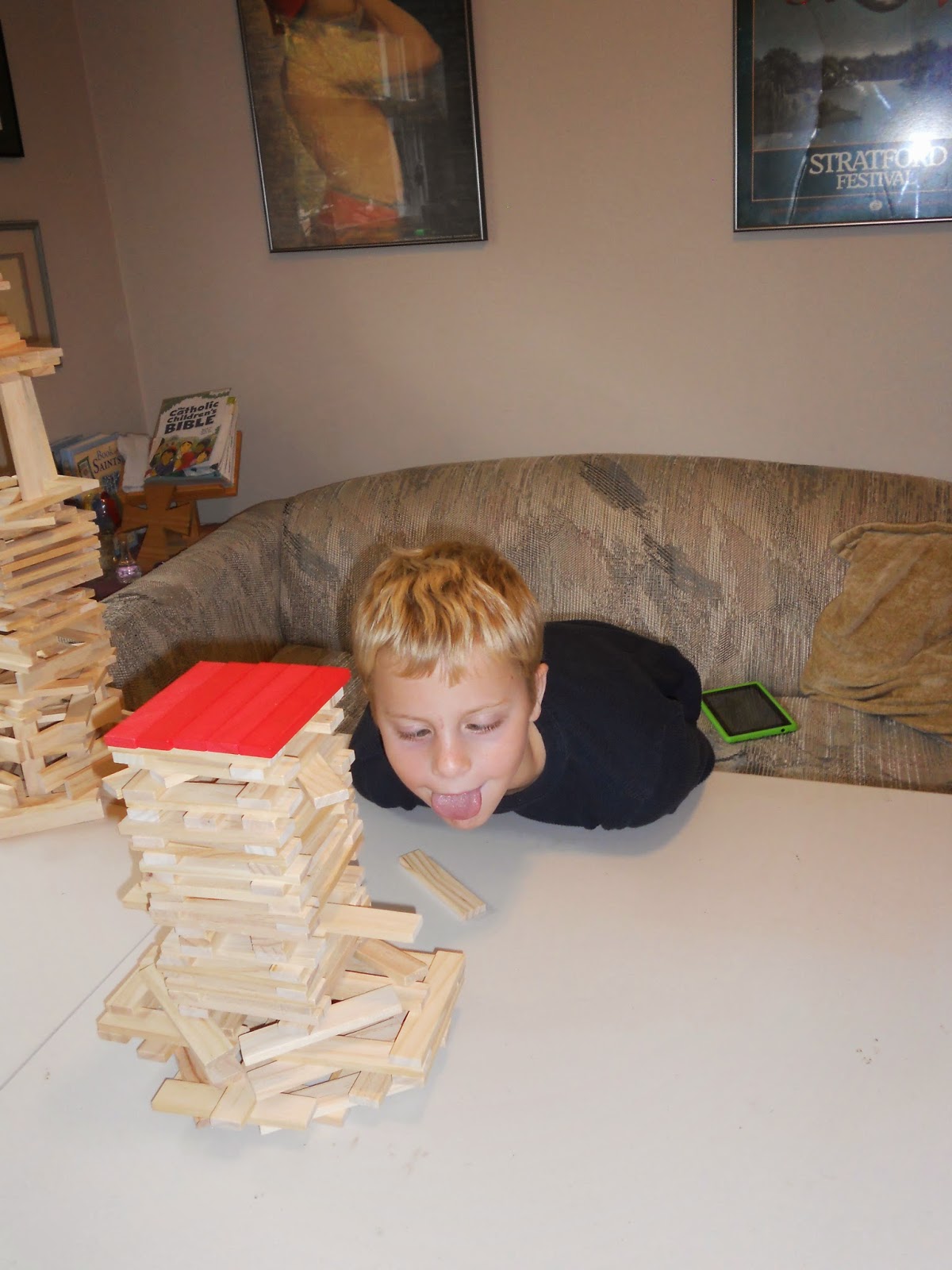 Both structures are knocked over now and the table put away.

Well, thanks for stopping by.  I learned a little about myself today, which is one of the reasons I do this.  I am afraid I'll forget, but, the strange part is, I'm afraid I'll forget my own childhood if I fail to  cherish theirs.  Make sense? 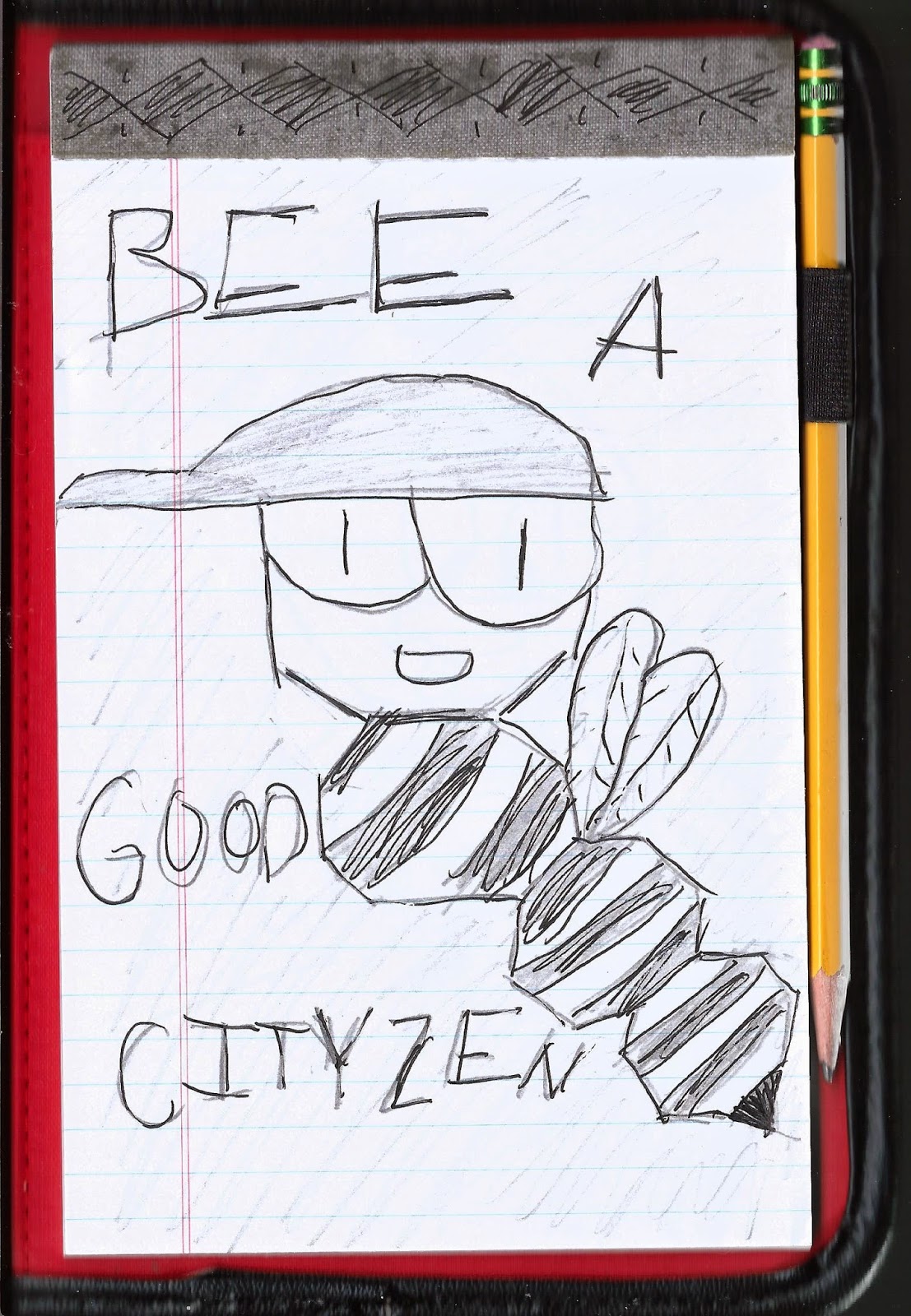 Yep, that sums it all up nicely I think.  You can tell your own story for this one, but I hope it involves a Chinese food restaurant called City Zen and a happy ninja delivery boy, who's a superhero...