You know, some folks might say I've got a lot of goddamned nerve talking about prayer. I think they're right. I'm far from reverent, miles from righteous, a lifetime away from holy. I cuss too much, I make inappropriate jokes, like a few beers and loud music and rough lyrics. I anger too quickly, love too deeply, sadden at the drop of a tear.

I am an animal, zoologically speaking. We all are.

We forget that. We forget that deep under all this intellect and cleverness there shivers a frightened animal ready to fight or flee. We forget that our gluttony and lust and jealousy and rage are the animal in us. The fact of this is inconceivably... simple - just look in the mirror.

We forget, also, of Grace. There is a love, undeserved and true, that lifts us out of that bestial legacy and anchors us firmly to our imagination, intelligence and integrity. And there? Science, art, romance, literature, philosophy, physics. All because, somehow, we said as one humanity, there is more to this than than those evolutionary "Four Fs" (fighting, fleeing, feeding and, uh, mating).

Now, somewhere, between the two, perhaps at the very crossroads of the two, is where I often find myself. I think this is from where we pray.

That's just me. It helps me to think we share that in common, even if it is not true, and it certainly may not be. True that is.

The Language Arts assignment was simple, a tribute essay. An opening, some paragraphs of body, a closing, a quote, a word count. Later the essay would become a speech to share with the rest of the class. All and all, a worthy assignment.

One boy decided to do his on a parish priest he knew who had passed away from cancer a while back. He'd taken it hard, harder than he'd let on, but he'd also drawn a certain inspiration from the event. He'd given it a great deal of consideration and that shows in the essay, the details of which aren’t necessary here - suffice to sat they are sweet and tender, heartfelt and little sad.

He chose his quote from a book about a would-be prophet turned martyr, The New Testament, in a chapter called simply, Luke. In a story about mothers, births and wonder: "For with God nothing shall be impossible " A bold choice, perhaps a little out of context, but... He opened the essay with the quote and began his speech the same.

He is practicing the oral essay with his mom at a table. He begins too quickly, gets tongue-tied, loses his place and becomes frustrated. In the past he's been good at speeches. He mentions this and is assured that it might be harder this time because it is so close, so personal. He agrees and tries again.

Again he begins too quickly. His father, lingering in the kitchen pretending to be wiping counters, listens. He wonders if the boy is perhaps embarrassed by the quote, reluctant to cite scripture, as so many are. He dismisses the thought, knowing that it is really about himself. The boy struggles through the whole thing. His mother encourages but he seems dejected and worried about it.

From the kitchen, the father, thinking finally of the boy, suggests that the quote is really a sort of prayer. If in God all things are indeed possible then the speech should be no problem.

The boy thinks this may be true. He tries again and is much better, much more fluid, much more confident. He finds the rhythm of the words and is engaged. He is storytelling, which is always a kind of prayer. The words he'd written become more real, he speaks of "his own Spiritual journey" and seems to sense that he is in the middle of it, doing it, right now. The change is remarkable.

The boy is surprised. The mother smiles tenderly and tells him she knew he could do it.

Back in the kitchen, the father shakes his head in wonder and whispers, So did God... 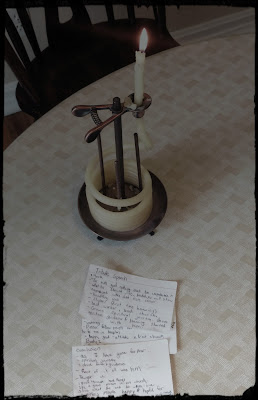 The brother of the novice sojourner, listening this whole time, is in the same class. He's chosen as the subject of his tribute... his brother. His essay is also sweet and tender, heartfelt and little sad.

That's about all for today, or not...

I rarely pray from my knees. Most often it is from my heart. I don't use many set prayers - although I could suggest dozens to you. I don’t twist beautiful beads or light incense - you're right, I do have a thing for candles. I do like sacred places, beautiful chapels, churches and cathedrals and have prayed in many. I've had little success with trying to pray at certain times or on a particular day.

The truth is, I do pray from my knees when I set a fire in my hearth, the kindling and logs my words, flame my inspiration. I pray on my knees with a baby on a blanket, each coo and murmur an amen.

In my head I whisper a set prayer many times a day. I'll teach it to you.

It doesn't need an amen.

It's true that I don't hold rosaries or icons in my hands. But I've prayed holding so many other things. Sticks and cigarettes, silver bound gemstones, a rock with a hole in it. A feather, a worn pair of shoes, tiny stained and worn sweatshirts, old sheets. A book or a bottle, both. A scrapbook, a frame, a phone, a photograph. Dirt. Tears. Heads. Hearts. Hands...

I don't scent with sandalwood or frankincense, but I do with garlic, syrup and brown butter.

I do love to pray in sacred places and I've seen so many. Like the NICU of a hospital called Christ. A tent, cold and wet. A livingroom, this one and ones remembered. A bunk-bedded bedroom. A stage, a bar, a break room, a closet. Great forests and stone quarries, jumbled city streets and jetliners.

I also do say prayers at specific times. The morning prayer that is simply lifting myself up and into the day to come. The one that I always say to the subtle dawn or outrageous sunset. The one I shout back at thunder. The one that is simply closing my eyes and drifting towards sleep.

I don't mean to sound preachy or even evangelical. I won't invoke the name of a savior, or issue born-again promises. I'm not urging you to lift your thoughts upward, that isn't what matters. I don't care if you want to pray or not, from my perspective, you already are. We all are.

Peace and thanks for sticking around. I’m embarrassingly uncomfortable talking about my own Spiritual journey, over the years that's not always gone over so well. But, if a boy can, than surely I can keep at it.


He sits between twin little boys, maybe three, maybe four.  They are huddled together in a little pop-up camper not for warmth, but for fear.  A thunderstorm rages and cracks, just outside the canvas walls and fiberglass roof.

A typical Ohio valley summer storm, but it is after dark and that intensifies the drama.  He's seen them before, sat through them on porches and in tents and barns.  He knows it will pass.  He feels...

"Define safe," he thinks to himself.  They are not on a high ridge, not exposed, the camper is supposed to mitigate a direct lightning hit.  The rain is hard but not coming in anywhere, the wind is gusting and the canvas, well-made and dependable, holds strong.

He knows they are afraid of the noise, the cacophony that is hard rain on a fiberglass roof; afraid of the unmuffled thunder; afraid of the foreboding lightning.  He feels they are "safe."  But they are young, they haven't spent a some fifty years weighing the odds.  They haven't come through mountain thunderstorms, too close tornadoes, roiling sailboats, blinding blizzards safely.  They are afraid because they've no evidence that they will be okay.

"Let's shove your sleeping bags and your bear and kitty into this trash bag and we'll make a run to the truck where I know we will be safe."  He grabs a towel and shoves it in as well.  He waits for a flash and a crack and runs ahead of them, throwing open the doors, and the hustle in.

They are wet and cold, even in summer the rain can seem so icy.  The boys dry off and bundle up in the blankets, hugging their little stuffed animals.  The car starts, the heat and defrost blow.  The windshield wipers clear away the sheeted rain.  They are in the middle of it.  Trees blowing, leaves and sticks fall to the pavement.  The lightning is much brighter, sharper and cleaner.  The thunder and rain are muffled better in the vehicle but still loud.

He worries that this all will scare them more and turns in his seat to assure them.  They are both smiling in wide-eyed wonder at the energy and crazy beauty of the storm.


Her eyes are puffy, his nose is snotty.  A school bus approaches and two second grade boys spill out.

"Oh, God, those poor children were the same age as these boys, my sons," she thinks as they laugh and spin towards the couple.  It is a bright and pretty December day, the fourteenth, 2012.

"I can't do this," he says to her as they approach.

When they are done, when have finished saying what the had to say, they wait.

"Oh yes, sweetheart," she says through the tears which can no longer be dammed.  They hug their dear sons, hold them too tight, perhaps scaring the young souls in a way they may wonder about for a lifetime.  They look over the blonde heads into each others wet eyes and both wonder the same thing,  "Are we lying to them?"


Some five years later, the bus again, older boys, young men, mancubs, get off the bus.

"Hey Dad, did you hear about that crazy dude who shot a bunch of people in Las Vegas?"

"What the frick is up with people like that?" one boy asks shaking his head.

They continue on in and sit at the same table, in the same dining room, on the same street, in the same community.  They talk of mental health, of evil, of gun control.  They speak of the "helpers" (thank you, Mr. Rogers) of police and firefighters and panic and - God help us - what to do in an "active shooter" situation, which they've already discussed in detail - God help us, again.  They imagine scenarios, scenes, situations and wonder how they might react.

It is a horrible and necessary conversation.

"Yeah," they sigh together, defeated, their armor cracked but somehow intact.

"Dad," one says quietly.  He hesitates, perhaps afraid to ask, afraid to be answered.  "Are we safe?"