The Conundrum of Memory


It is really hard to summarize a week long vacation in a few - well, several, in my case - words.  I have the memories, I have some pictures and images, everything I need it would seem is right here at my finger's tip and my mind's edge.

But where to begin...

I remember the Pacific, it was cold and my cousins were tanned.  We body-surfed a little and there were sandy hot dogs.  I am pretty sure I swam in the Atlantic somewhere in my childhood, a trip to DC or perhaps a Civil War tour when I was ten or so.  I remember it was dirty and the beach smelled, well, beachy, as apposed to the Pacific's salty zing.

Marci and I are sitting on the beach lamenting the fact that the  boys aren't really too keen on getting back in the ocean.  We understand why, but I can't help but think what they are missing in the rough and tumble of the waves, the remarkable feeling in your soul as the breaker takes you to the shore on a boogie board, the laugh you have at yourself as yet another wave takes you out because you were watching another guy ride one in, the feeling of purpose and recklessness that only the surf can serve.

She asks me when I really learned to love that ocean feeling, that vibe.  I smile and remember.  In my mid-twenties a group of folks I worked with rented a dilapidated, mildewed beach house on the Jersey shore, Belmar, if memory serves, for a couple of summers in the late eighties.  We made margaritas from anything every night - we were all bartenders - and spent the days body-surfing, watching girls, drinking beer and smoking damp cigarettes.  I am pretty sure my guitar stills has that Jersey sand in it to this day.

I see her point.  It is not this trip that will determine their life's affiliation with the ocean.  Not the next one either, perhaps.  Maybe it doesn't really matter.  Sometimes I want too much of my own recollections, demand too much of my own memories, letting them shade and sometimes cloud the ones they are making.

They got a brief feel for it, but on the first full day we were there in Folly Beach, SC, in less than a few hours time, both boys were stung by a jellyfish.  Neither wanted to get back in.  I tried everything from demanding to cajoling, even wearing my self out having "fun" in the surf.

I tried to hard, expected too much, over thought it all.

On the last full day we were there I rented a body board and urged them in, which they both managed, but the pain and fear and creepiness that those stings imparted were hard to forget, to overcome, but they did, briefly and I should remember that. 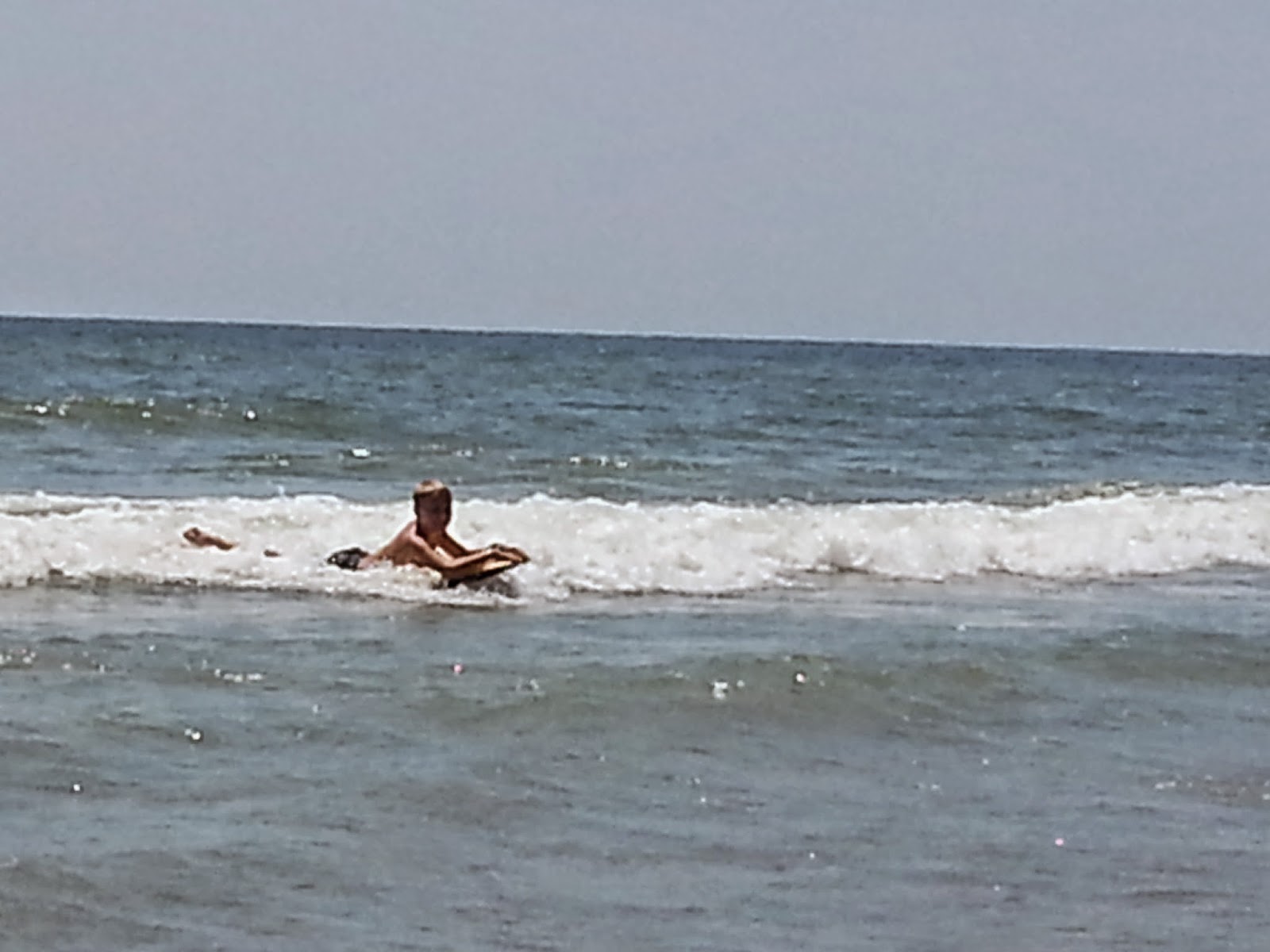 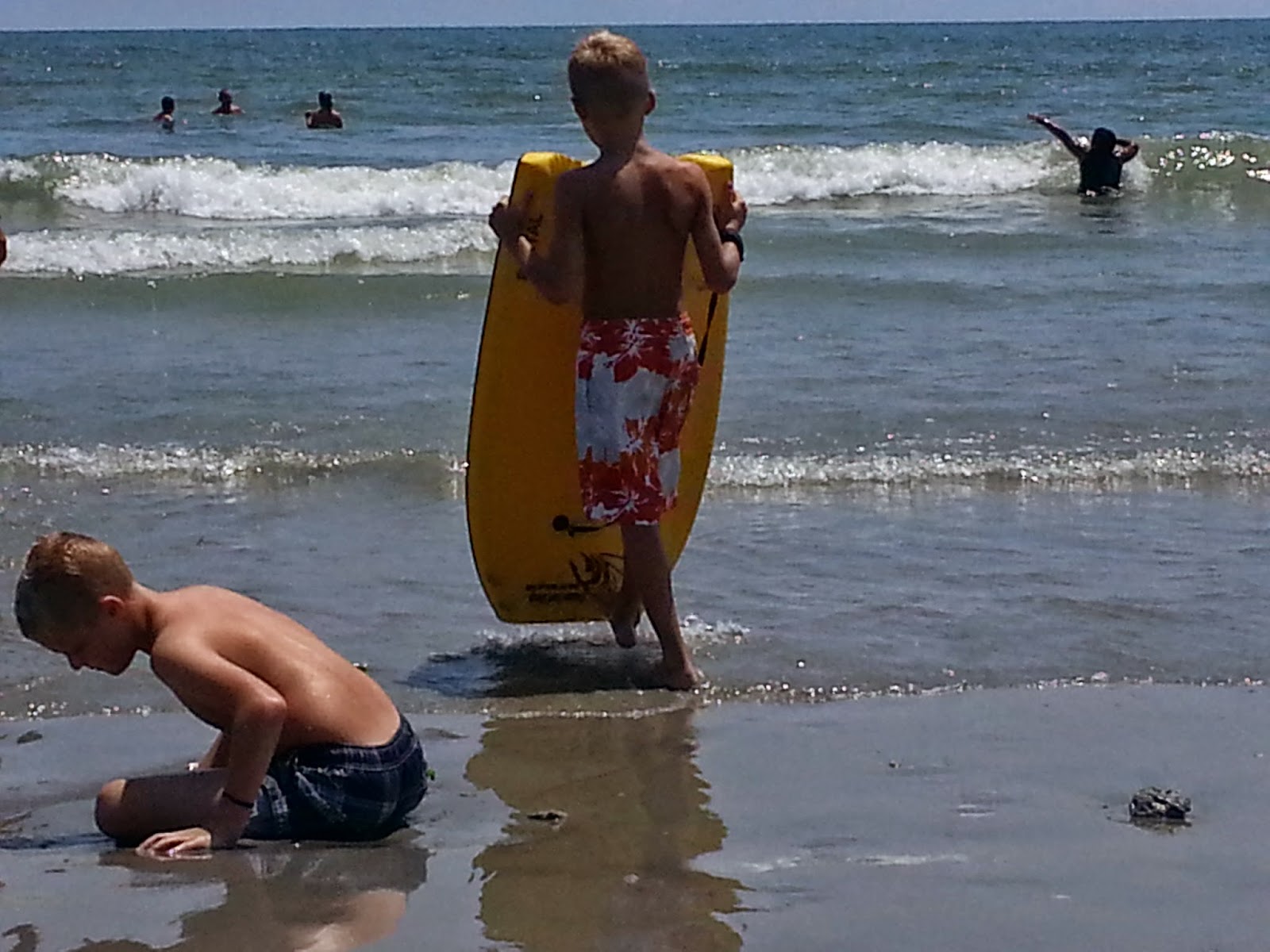 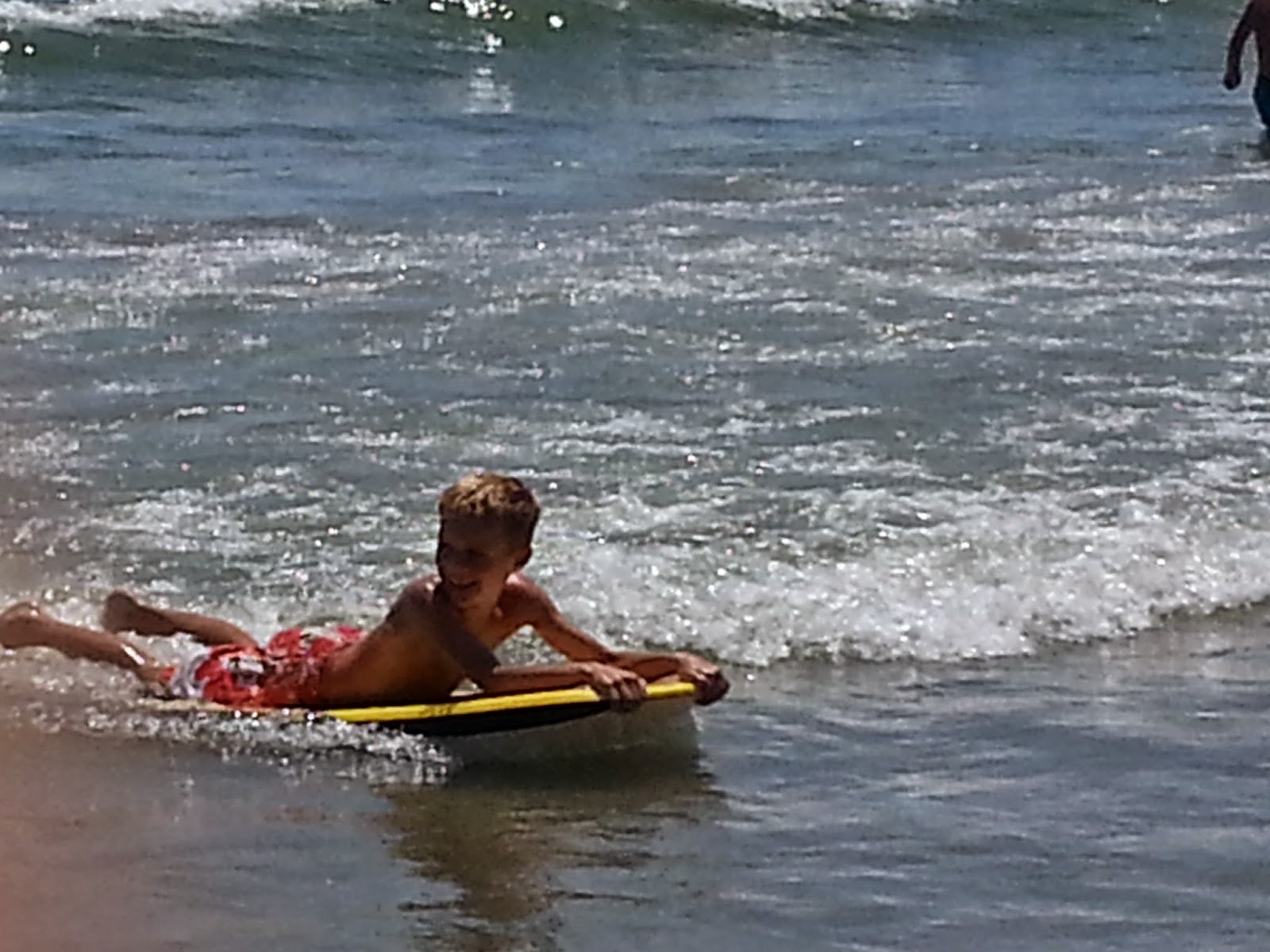 So, there wasn't as much playing in the surf as I might have liked, but there was plenty of beach-combing: 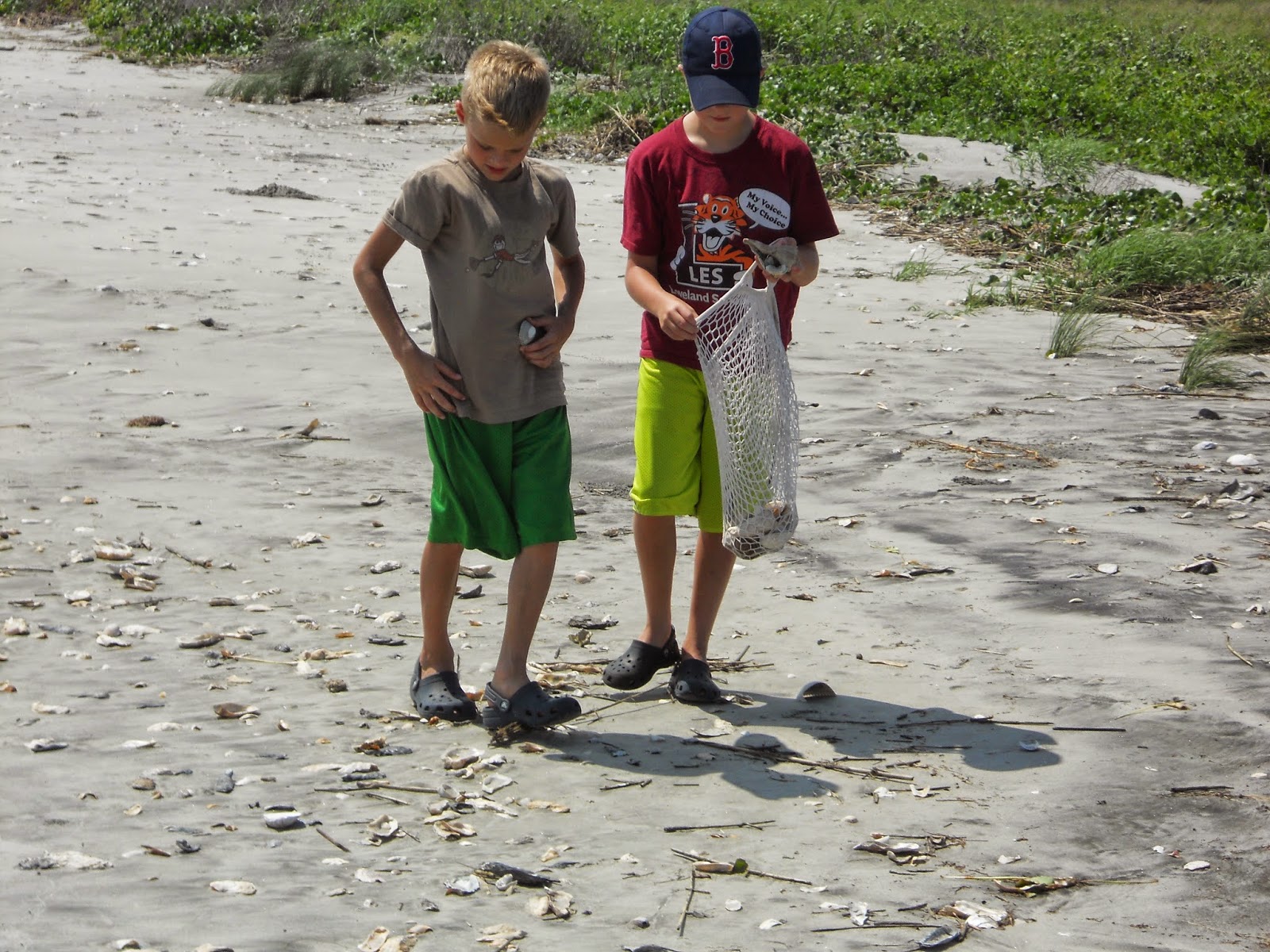 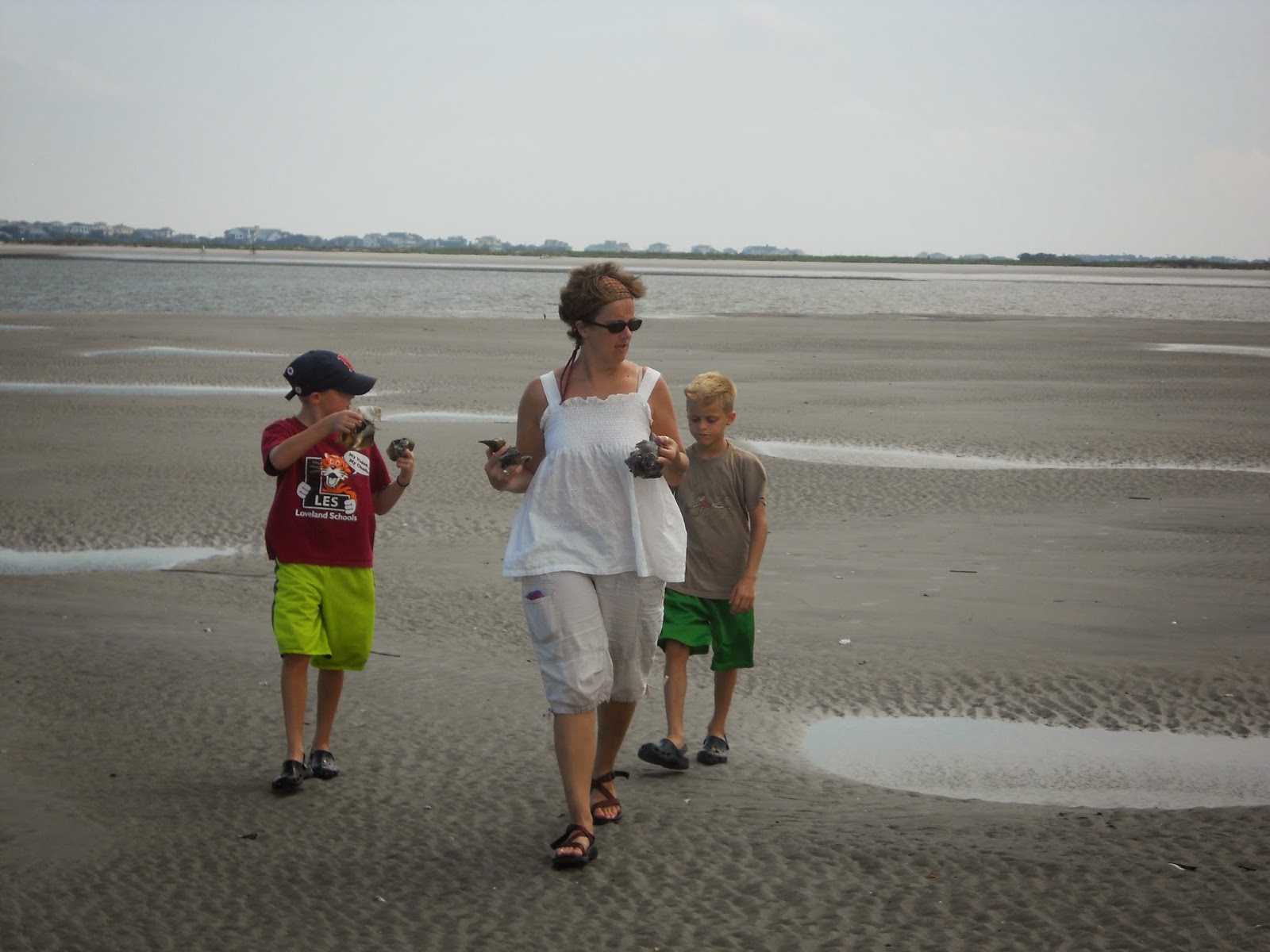 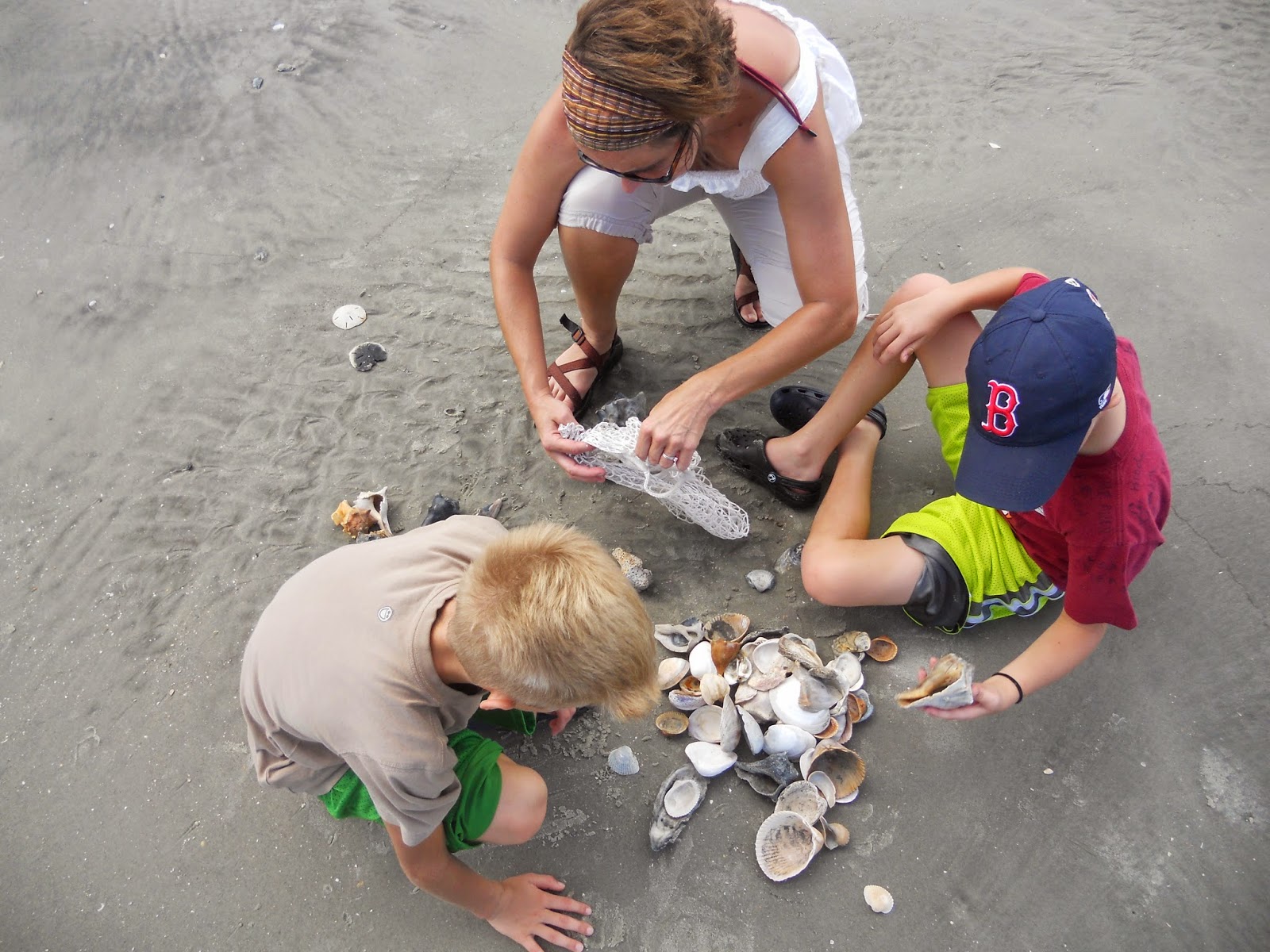 And walks downtown and great food: 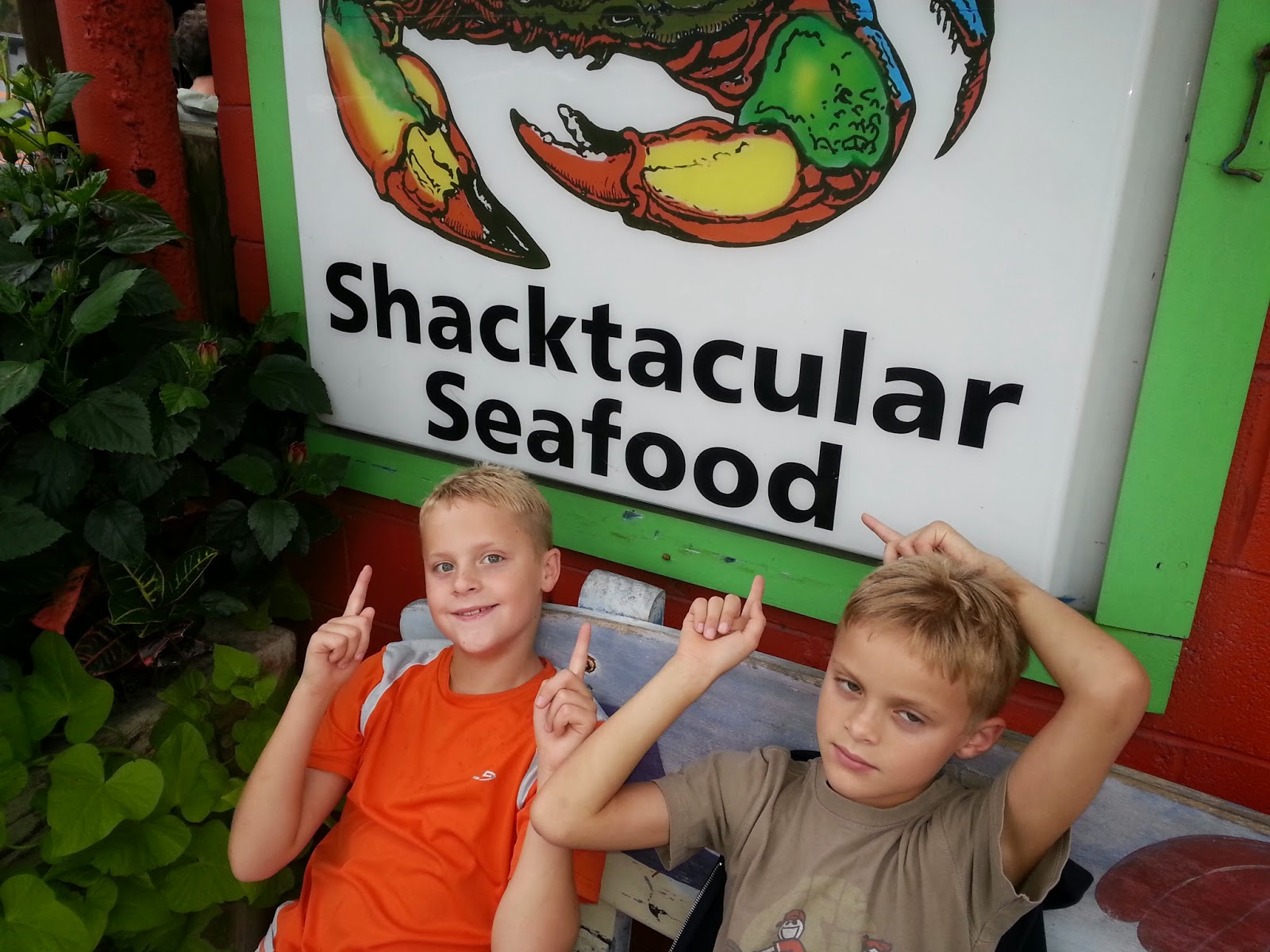 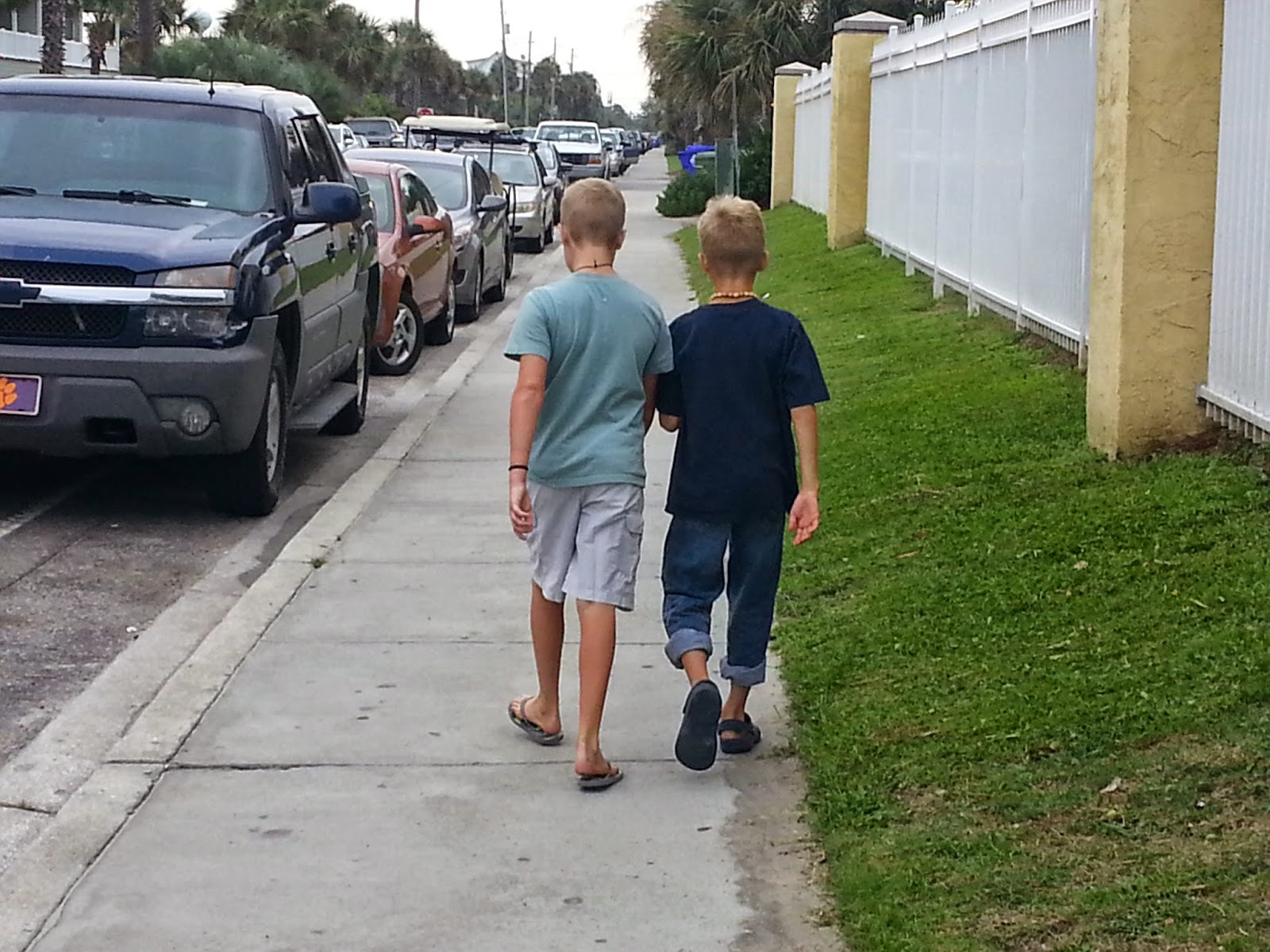 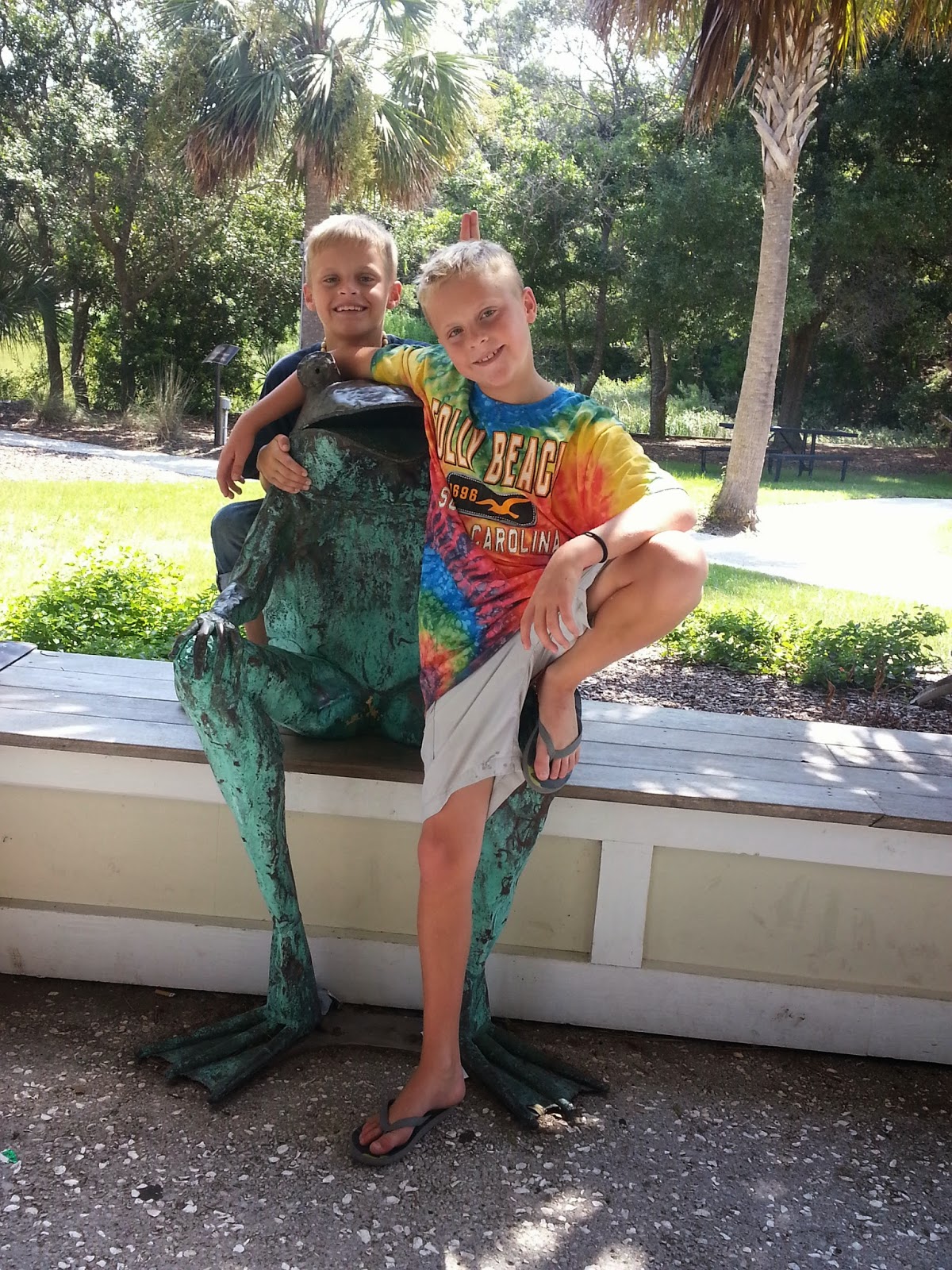 There was a long, leisurely walk down the main pier: 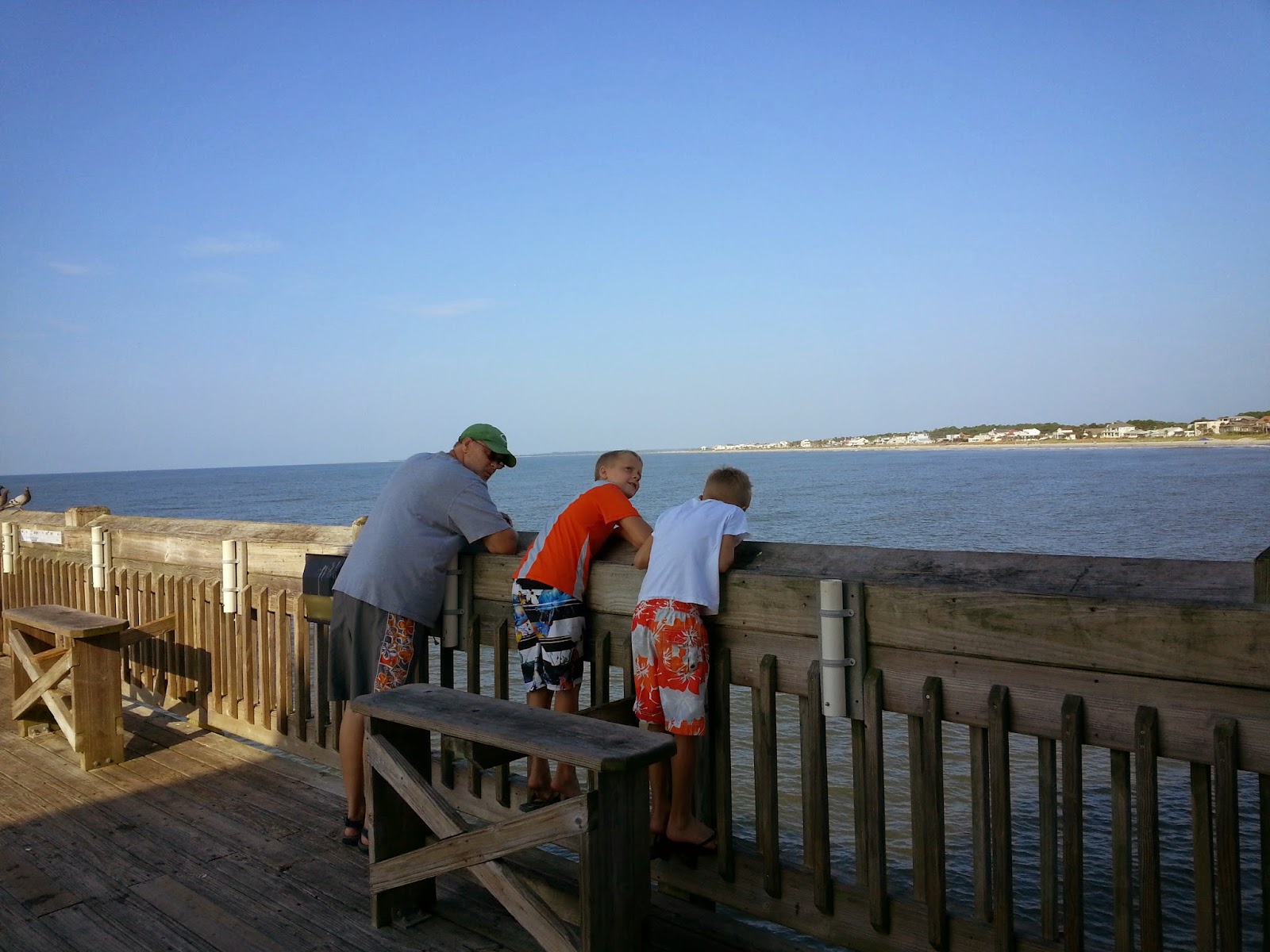 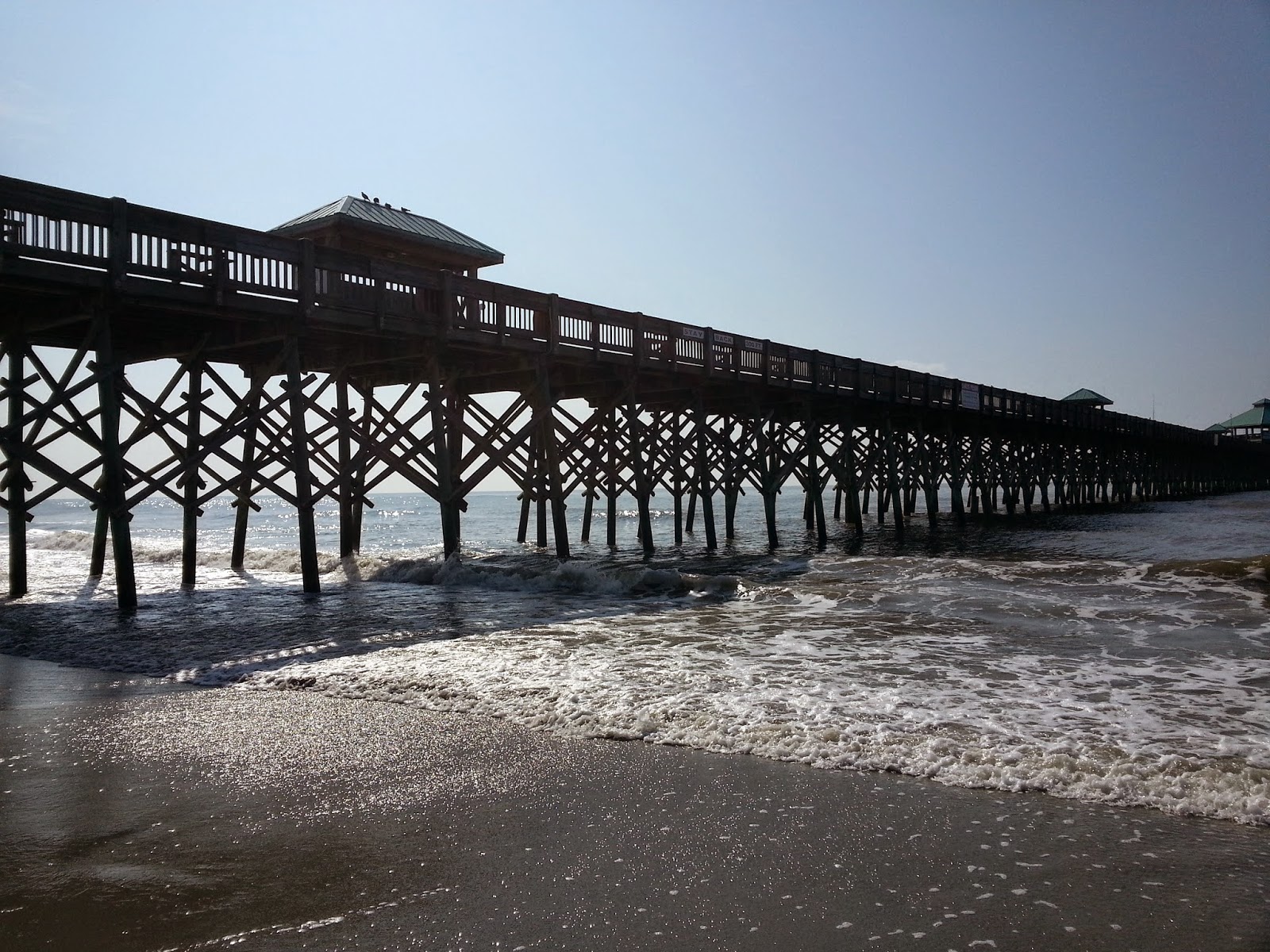 As I said earlier, I don't have a bunch of memories close at hand of my childhood beach times.  I do recall looking for shells, but that is the kind of memory that gets all muddled together and it just seems they are all the same except the size of your feet.  I do remember a the puka beads I got and rocked the summer of seventh or eighth grade, a tight choker that I bought and I thought I looked as handsome as that Partridge kid.

Nick and Zack made their own: 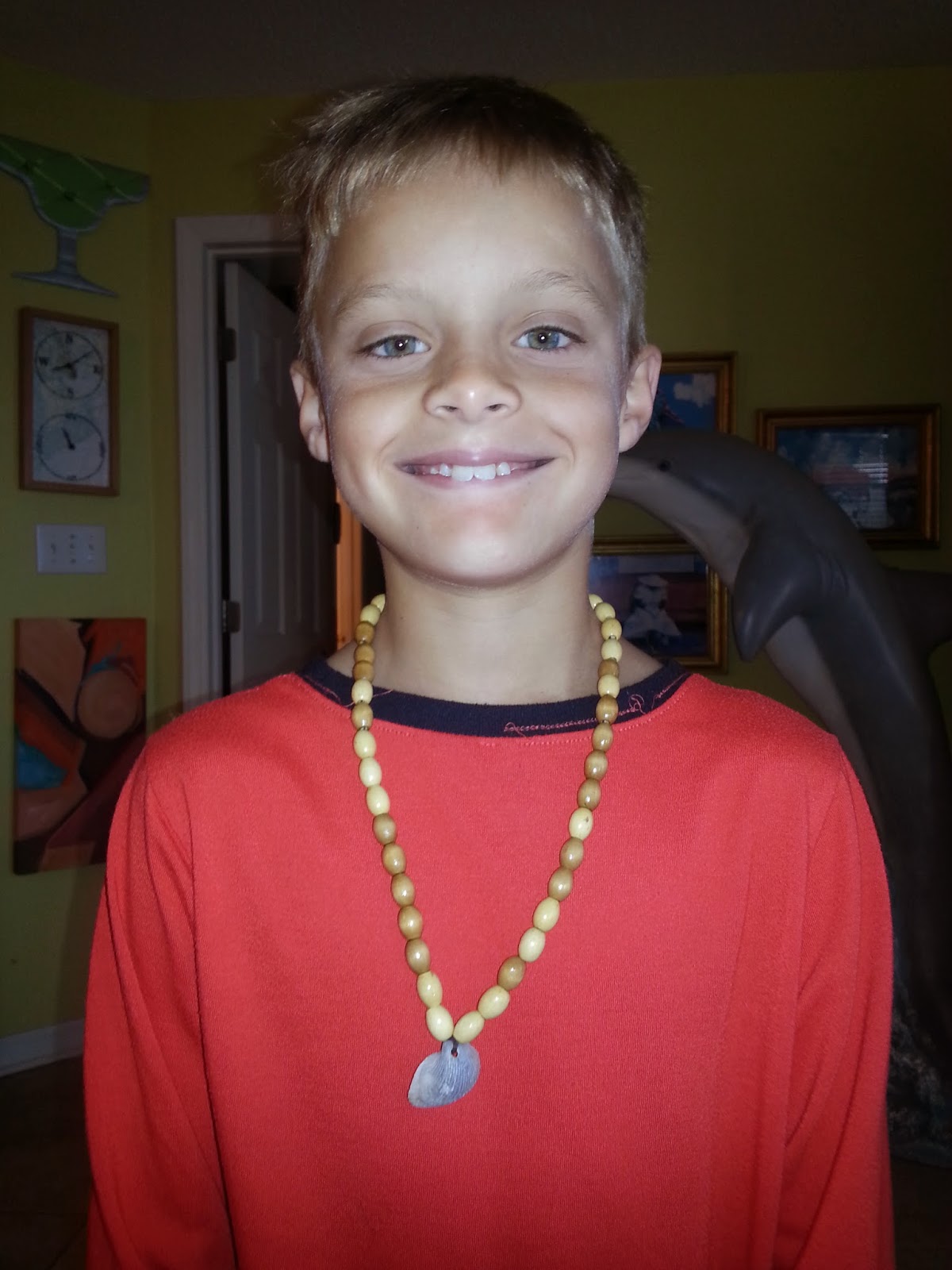 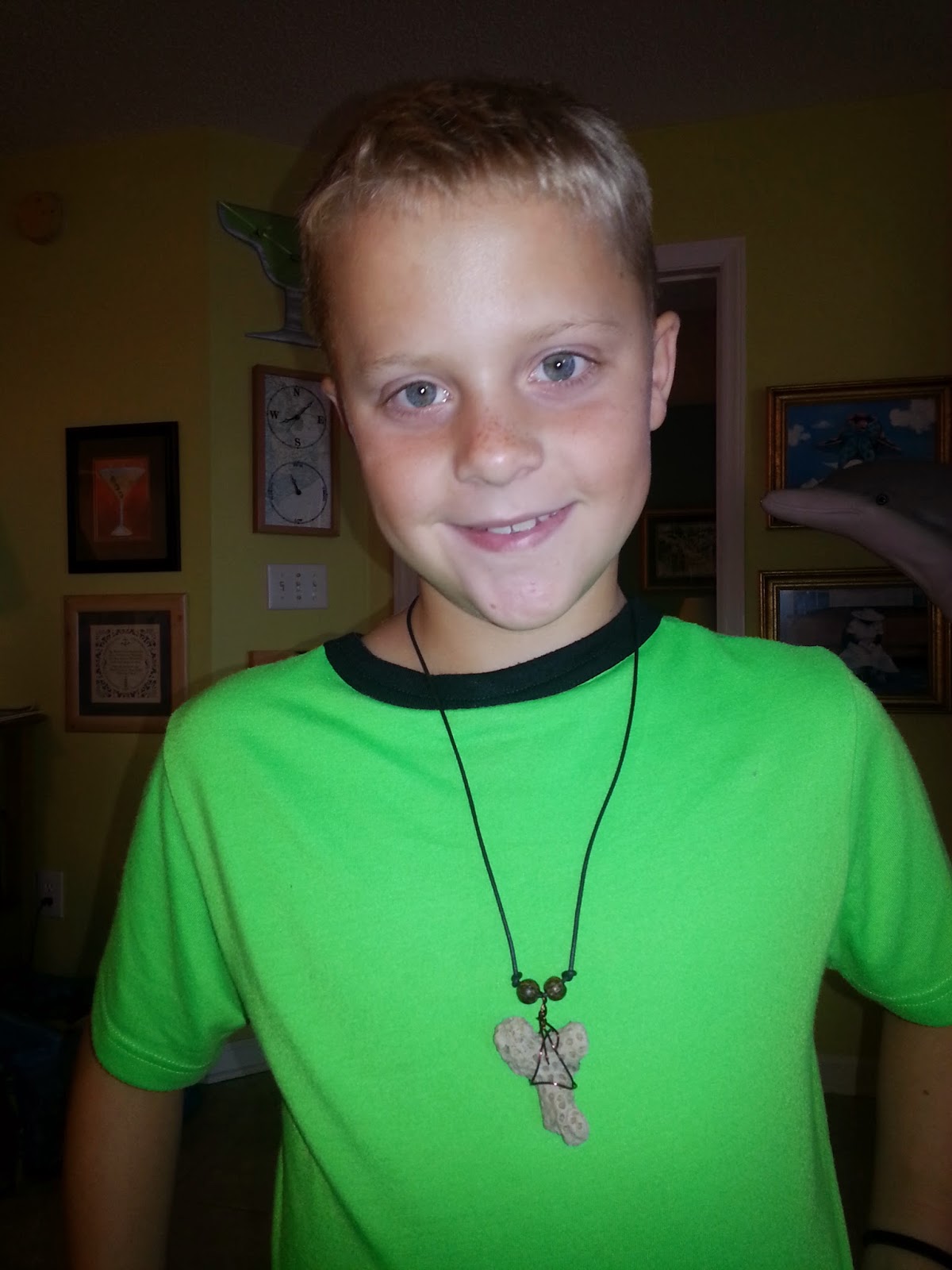 There's more, of course, but it occurs to me that I maybe serving them my memories and not letting them make theirs.  That may be a discussion for another time...

Let me finish this though.

There was a dolphin tour: 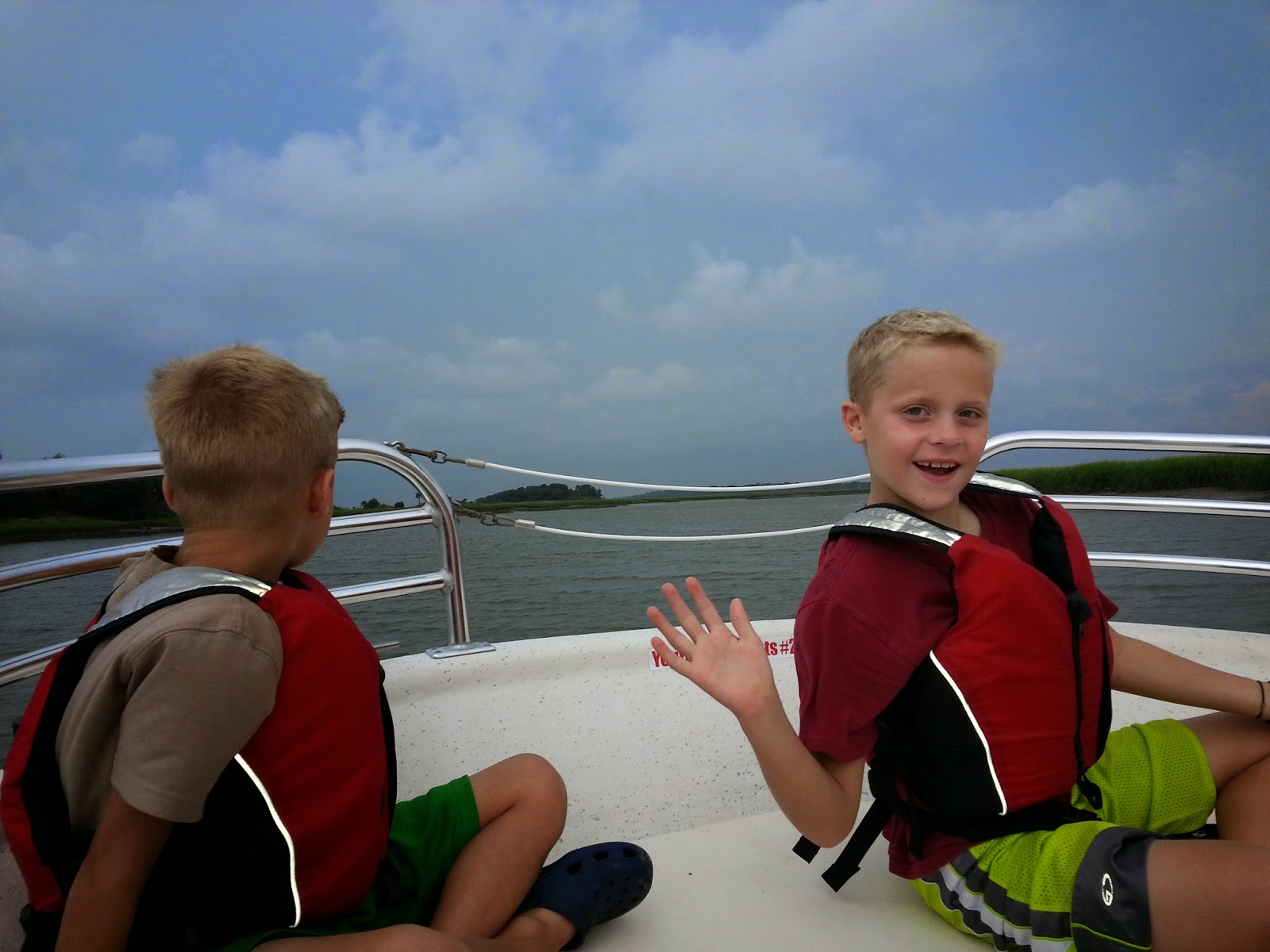 A pretty girl on an abandoned beach with a lighthouse in the distance: 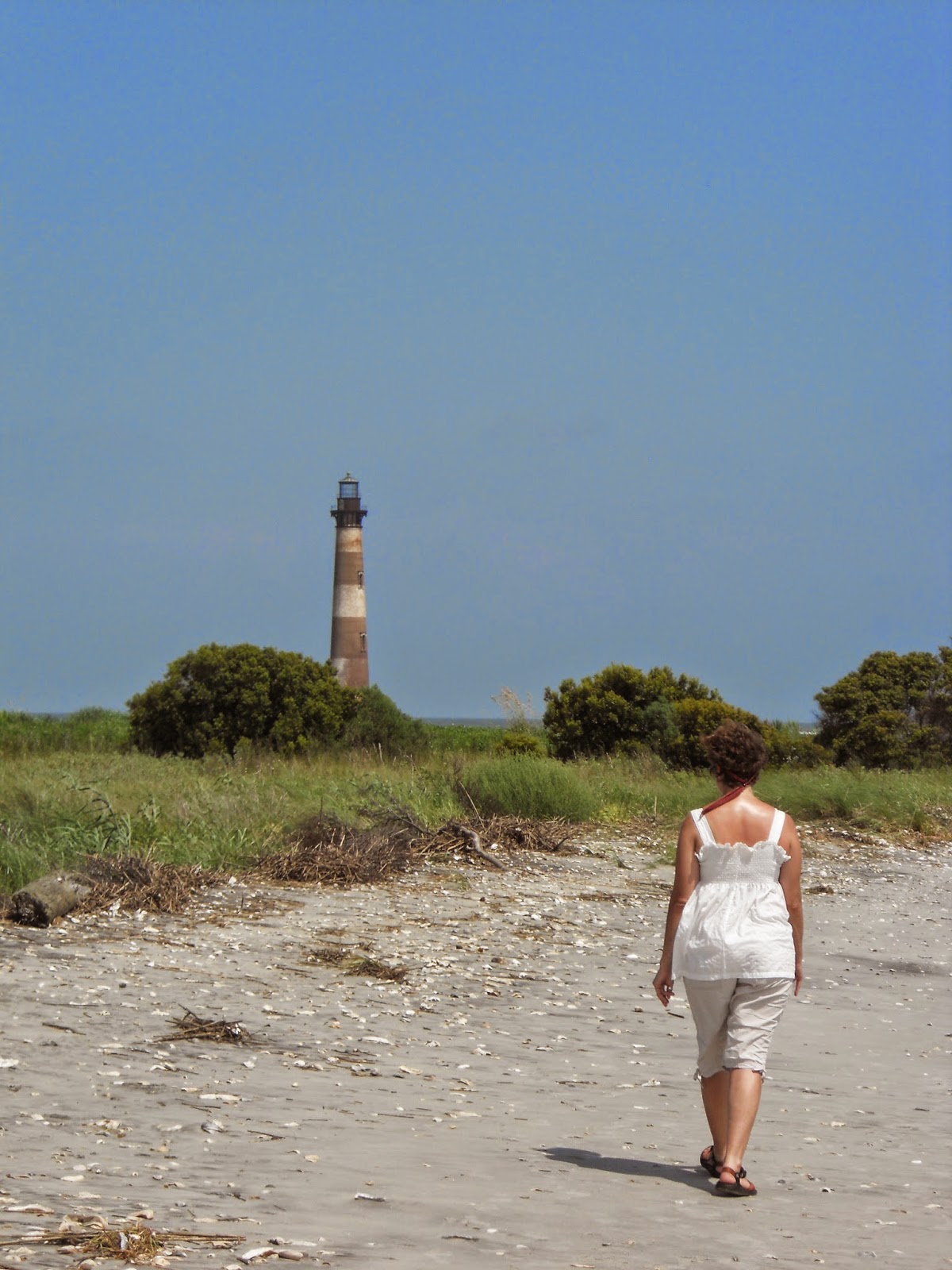 There was a purple piece of shell that Nick held for about ten hours straight: 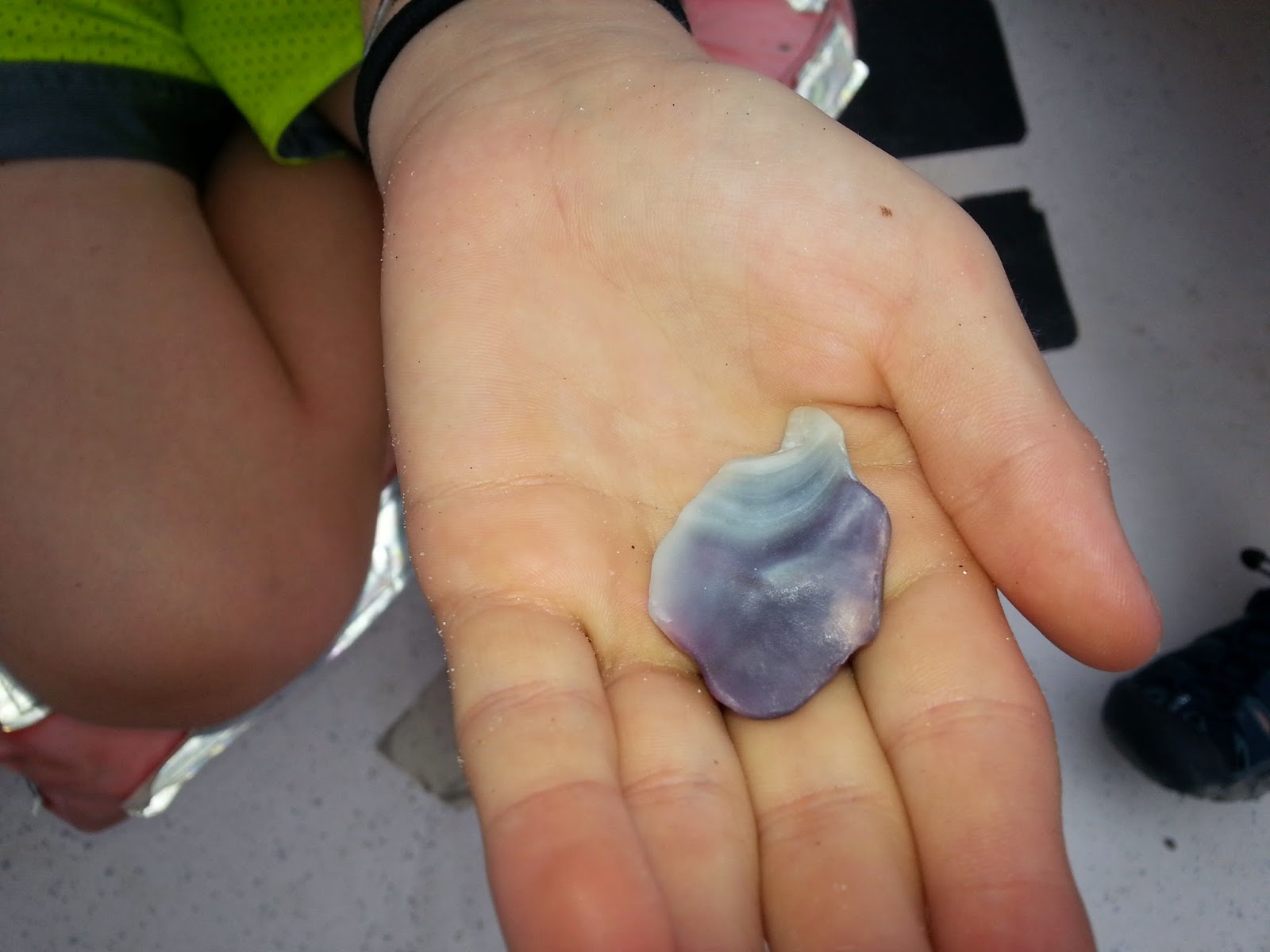 There was a silly and somewhat disorienting dolphin statue that needed a shirt and a hat: 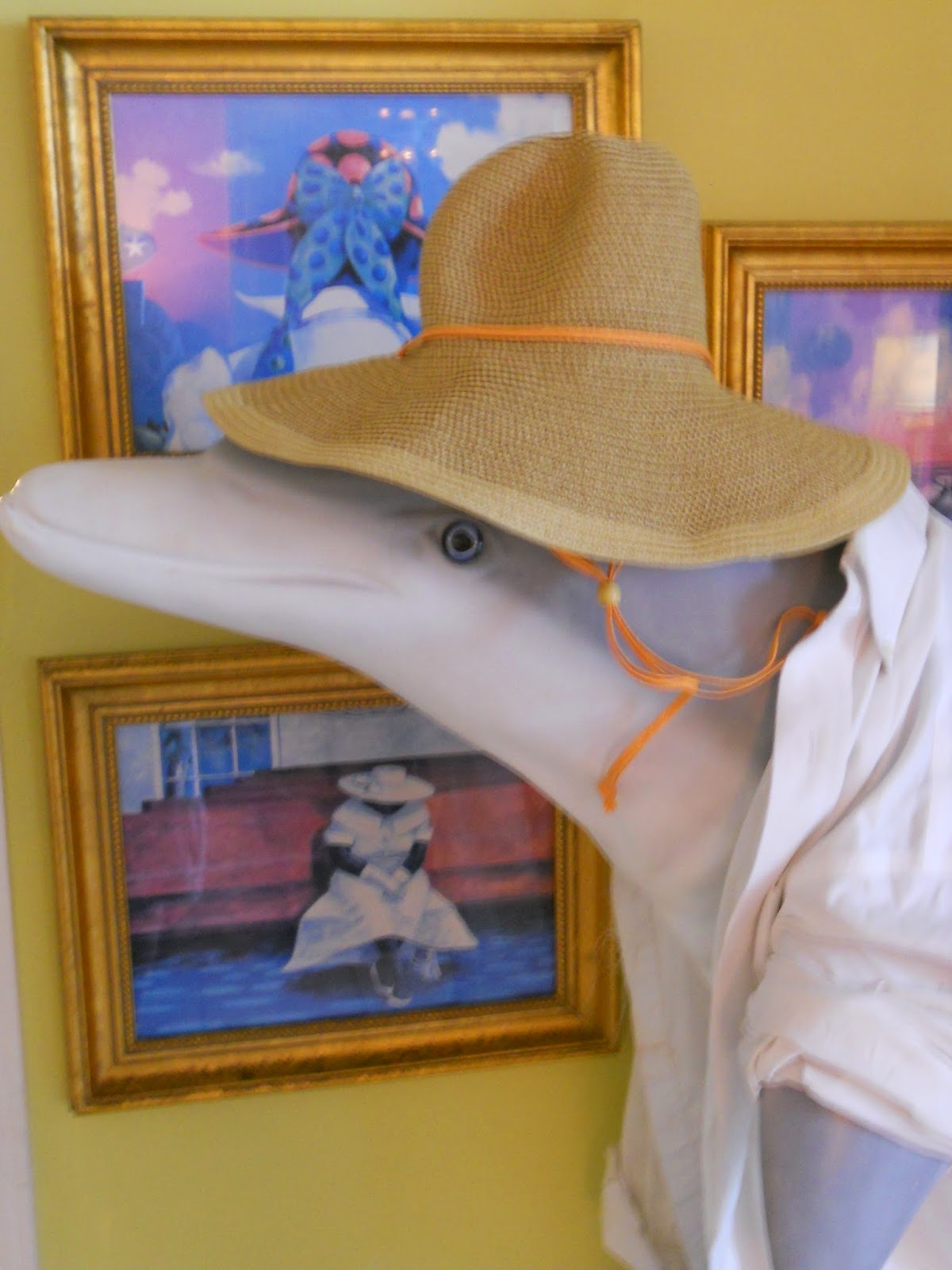 But mostly, by no one's fault, fate, kismet... whatever, it was the vacation that they got stung by a jellyfish.  Nick drew this in the sand: 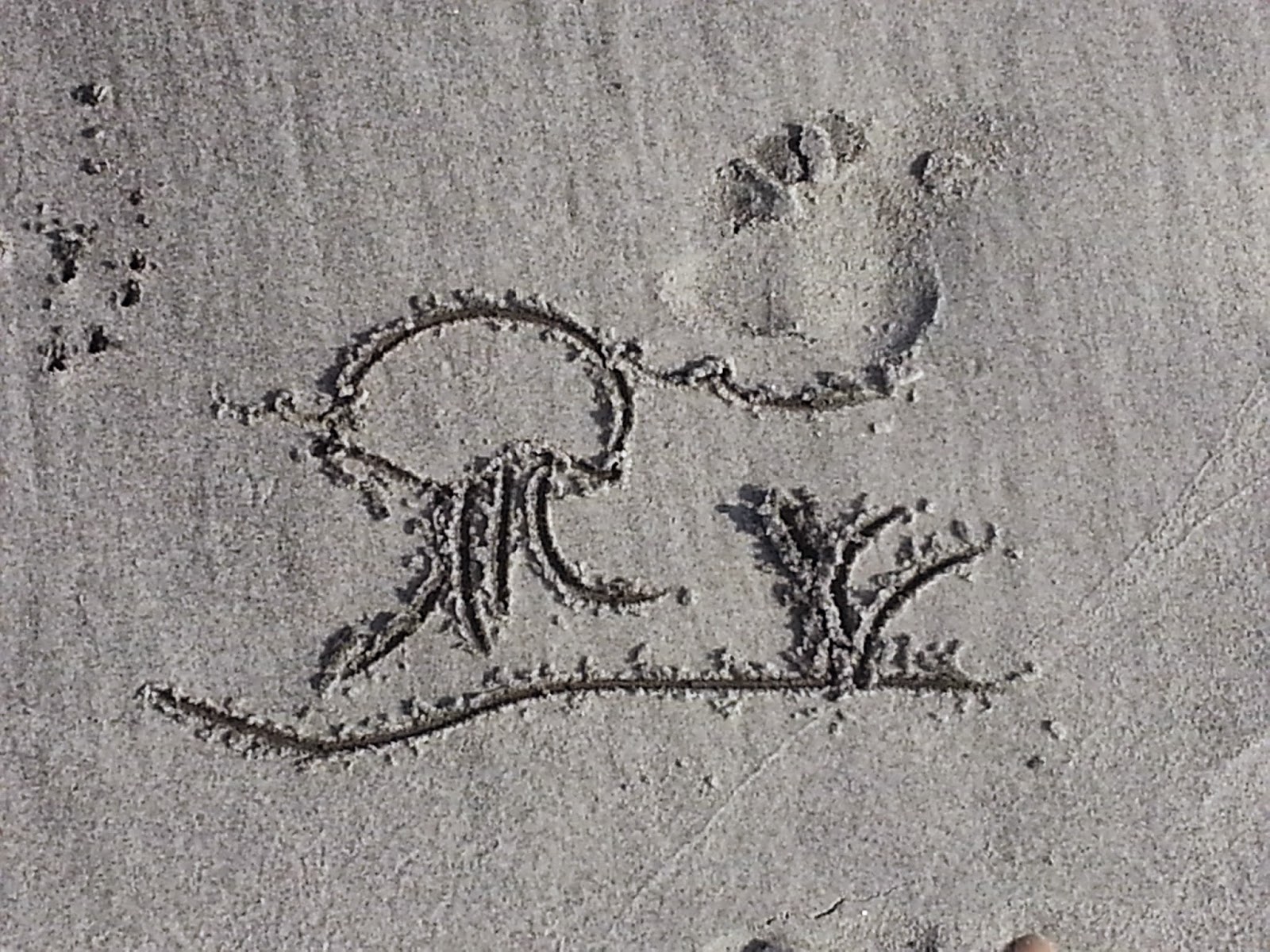 We also had a couple of journals along in case they felt inspired to begin their memoirs and this is the one and only entry in Zack's: 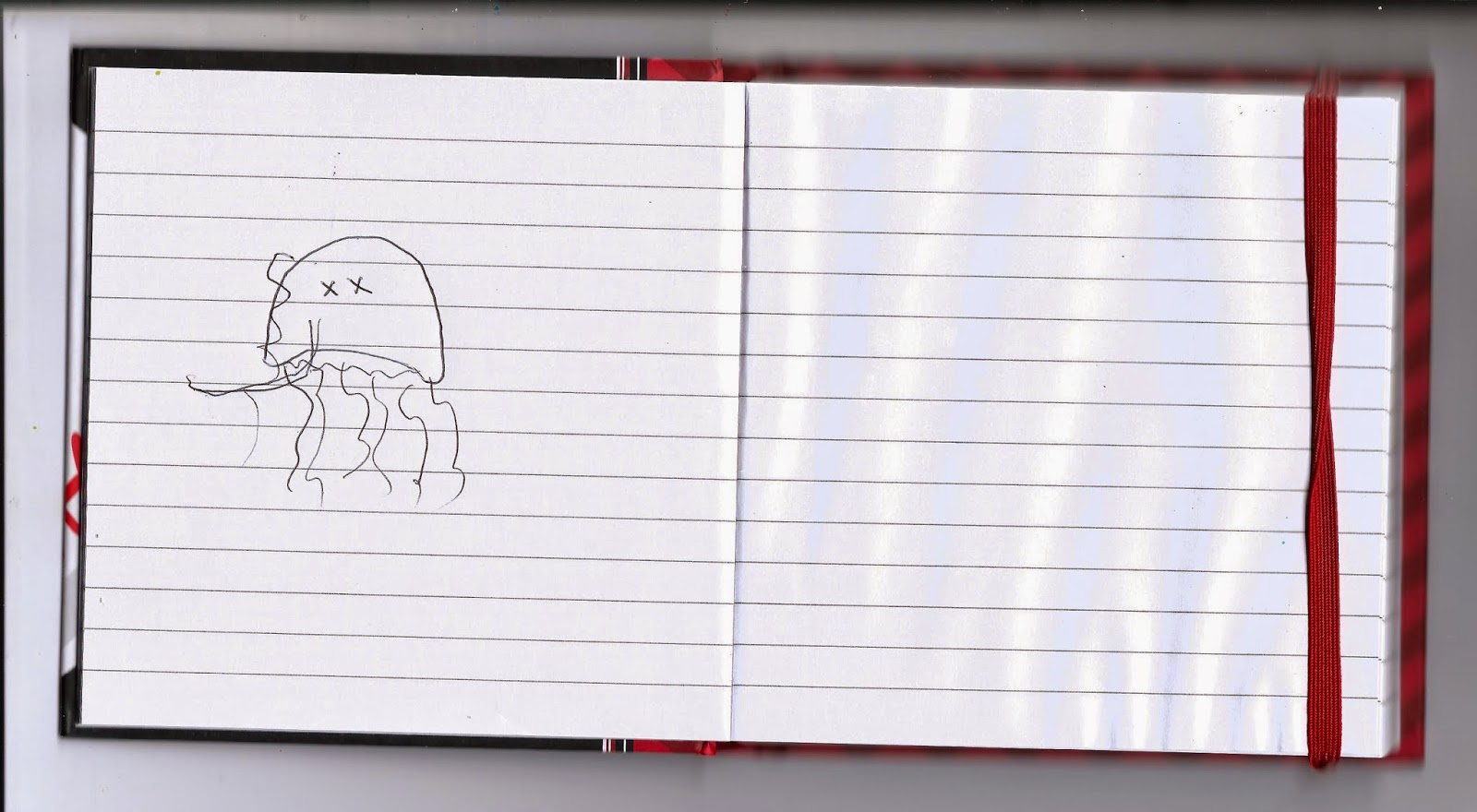 
I am also left with a dilemma, one I've been facing for a while, unable to define.  It's this:  Whose memories am I making?  I'd thought the boys at some point, but now, I am beginning to see that maybe this is all, selfishly, for me.  I'm gonna need some time to think about this...


I didn't know even Nick had an Instagram account, but he does so here's one last picture of the trip. 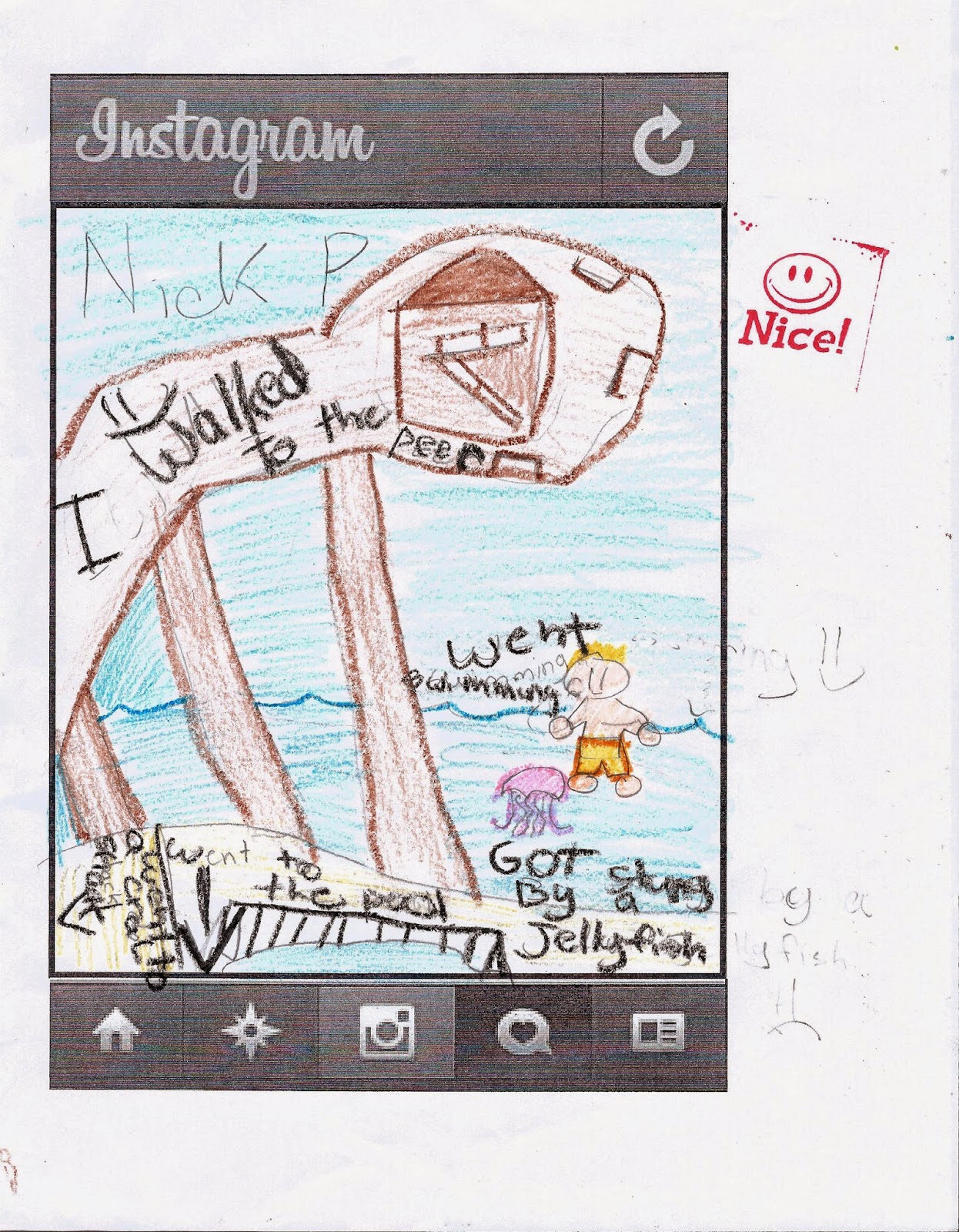 I shoulda started with this, it's sort of the whole trip in one image.  (Thank goodness for the "take-home folder" from school.)

"If anyone wants me, I'll be in the dungeon."


Thanks for traveling with me, us, you... I don't even know anymore, but the moon came up over the pier and the wind blew and and the surf sang and I, just me, remember it. 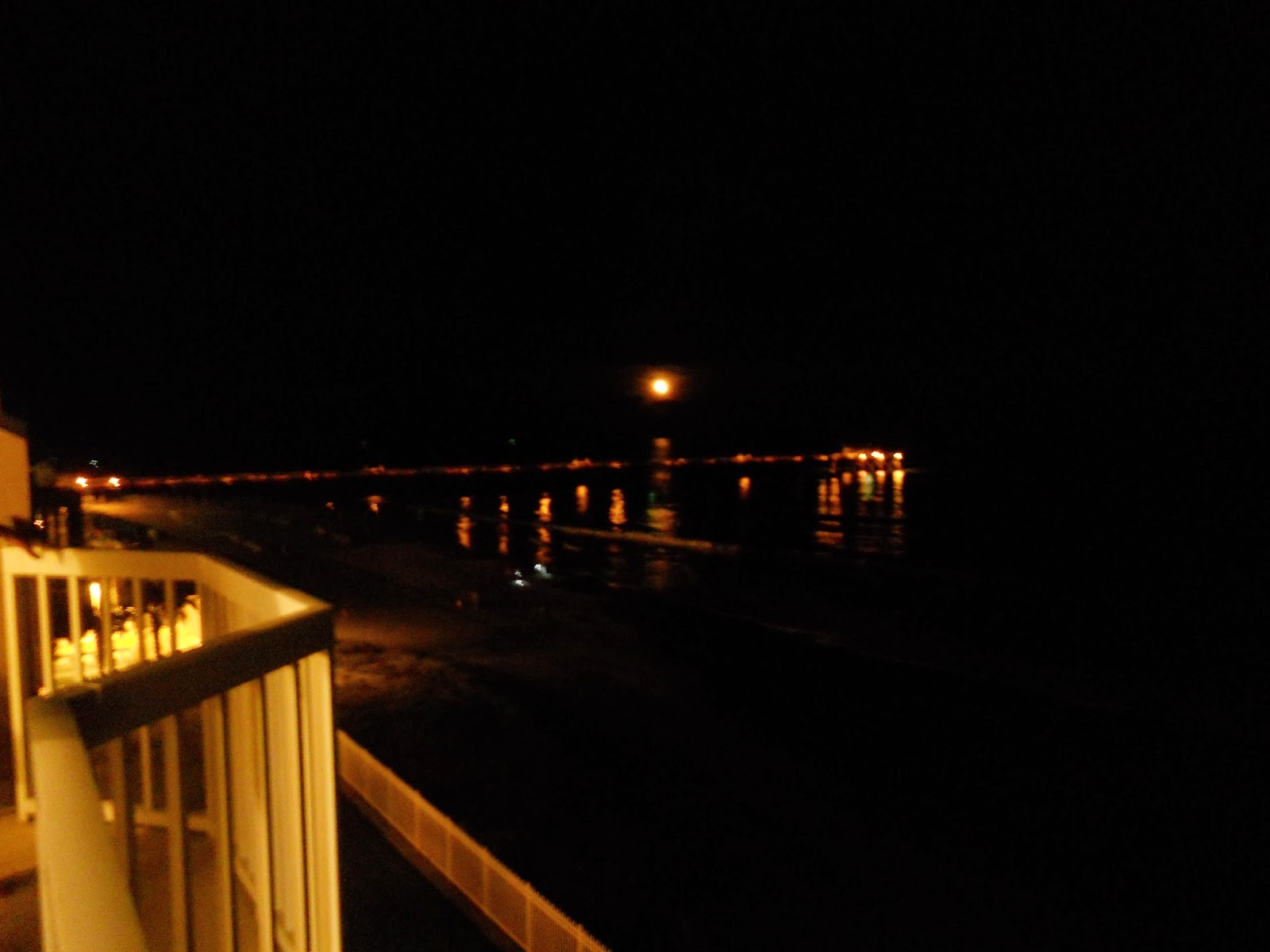 Thanks, Nana and Papa.