On Baseballs, Dirt and Shorts


This essay was originally published by the kind folks at City Dads Group a couple months back under the title "Backyard Baseball Field Fading Fast, Memories Staying Strong."  Over the years I've been very good about keeping all the stuff I write - pertaining to the boys and/or childhood - on this page.  I hope you don't mind.


I know where it is. I see it pretty frequently, but, unless you knew it was there, you’d probably miss it. I picked it up, rescued it really, from the lawn mower a couple of years back and put it in a fairly strange place.

It was hiding in the tall grass, all the way back in the yard, just this side of the home-run fence. It was what we always called a “game ball” to differentiate it from a “practice ball.” Game balls come off the bat hotter than the smooshy practice balls, so it was worthy of a rescue.

If you’ve ever been around wooden fences, you know that sometimes the posts begin to rot at the top where they are vulnerable to the rain and snow. After many years, thirty-some I’d guess in this case, this can create a divot at the top, a little bowl that, I know now, is the exact size of a baseball.

So, there it sits, rotting itself I am sure, just a little grey dome now, silent, unhit, uncaught, unmuddied for a couple or more years now.

I threw away a pair of shorts just yesterday. Those ubiquitous cargo shorts dads like so much and everyone else seems to hate. They were fraying at the bottom and the seams for the side pockets were torn and open. I shouldn’t have been wearing them anymore, honestly. I purchased them probably eight or so years ago.

As I looked at them, sitting on top of the trash bin, I got to thinking. I had worn them so frequently when our twin boys were little. I’d stuffed those pockets with handkerchiefs and juice boxes, Jolly Ranchers and jelly beans, smooth stones and acorns, peanut butter crackers, kazoos and, once, a cute little pink teddy bear in one and a blue one in the other – parting gifts from a birthday party if memory serves.

I know where it’s supposed to be and sometimes I think I see it. Once, it was so worn I had to move the plate back, closer to the house, making the home-run fence even farther away. The old spot grew back, but the new one became just as worn as the old one had been by the time a couple of seasons has passed.

Even though a rubber practice home plate covered part of the area, the grass stopped growing and it had became just a dirt patch. Often we forgot the plate and the boys pounded away at the bare ground, waiting for my pitch. It’s just under the edge of one of the old twin maples that shade and grace the backyard. More than once I had to get my loppers out to trim back a branch or two that were blocking the trajectory of that hopeful home-run ball.

I look out at the backyard and see them, us, really. In the strange timelessness, the weird immediacy of memory, the scene unfolds.

The graying, heavyset, man stands next to a bucket of balls. A boy stands and smacks his bat on a cracked and dirty home plate. Another boy, glove on, in “ready position” waits in the back of the yard not far from the fence line flanked by a couple of pine trees.

They are maybe seven.

The man, a dad, me, grabs a ball and inexpertly throws a pitch. A swing, the red Easton bat misses – boys don’t miss pitches, bats do. Another pitch, another swing. He connects but it is a practice ball and it falls easily into the hand of the boy in the outfield.

“Save it for later, for after I’m warmed up.”

Not knowing what to do with the ball, he doesn’t want it mixed back in with the others, he tries to stick it in the front pocket but it’s too tight in there. About to throw it back in the bucket he notices the side pocket, the cargo pocket, of his new shorts and settles the ball in there.

As the at-bat continues and he finds three more good balls, the pockets accommodate all four comfortably. He uses the first one he found last. The bucket is empty and the other boy will be up soon, after the balls are collected, the hits recalled and the diving catches bragged about. Backyard tradition has it that the last hit requires a run around the bases.

The pressure is on.

A soft throw, low and outside, just where he likes them. A red swoosh of bat. Ding! Loud and hard. The ball soars, the outfielder has a good jump on it, but comes up short. The ball sails on, it might go over …

Thwack, right into the top rail, it drops into the pine needles and tall grass of the neglected fence line.
“I can’t find it, Dad,” the fielder shouts in frustration, “He’s coming around third, you gotta get him at home!”

He pretend throws a pretend ball. The dad pretend catches it, runs toward home. The batter, now base runner, slides into home for real. His left foot catches the base, sends it flying and then his shoe tears into the grass underneath, skidding out a divot and the bare, brown dirt is exposed. The tag misses.

In the excitement, the ball is forgotten.

The next batter is up.

A misplaced, forlorn baseball. A worn out, thrown-away pair of shorts. A grown back batter’s box.

It is easy to spot beginnings. They are anticipated and celebrated. First steps, first spicy salsa, first T-ball practice, first school this, first church that, you know them. They go down in our memories. They are photographed and posted and bragged upon – as well they should.

But the lasts … man, the lasts you don’t see them coming sometimes.

We haven’t had batting practice in the backyard for a couple of years now, it occurs to me. I think we got tired of climbing the fence. I can only think of one time we even had a toss back there this year. I’d have liked to have known that they were the last, I’d have savored them more, remembered them better.

Right now, though, as I sit here at the dining room table looking back on our little field of dreams, I think I did savor them. Maybe, every time we played was just practice for the last time. Maybe every moment is a last. Maybe every pitch is a first. Maybe every moment is simply a now – a now held in the leather of a glove, in the dirt of a backyard, in the pine needles and tall grass of a fence line, in the frayed and worn pockets of a pair of shorts, in the strong branches of a maple tree, in these tears as I look back there as I write.

Excuse me, I’m going to go fish a pair of shorts out of the trash. My heart’s not done with them yet. 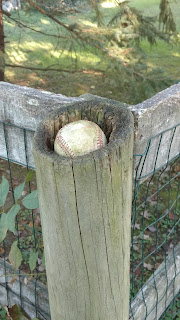 Thanks for stopping by.  These days I am never quite sure when you might hear from me again.