A select few hurt my heart a little but, overall, it has been relatively easy to write the pieces I’ve done here over the past eight years – four-hundred-and-eight-eight of them.  Earlier on I was so blinded by and enamored of the boys that, honestly, if there hadn’t been the time restraints, it’d be in the thousands.


As the boys got older, I attempted to transition away from talking about them, I started talking about myself.  It is both easy and hard, liberating and confining, joyful and miserable, to talk about oneself.  I’ve taken to it alright, though, with the exception of how to present the other players in my past.  I’ve tried to skirt the issue – you know, the old “the names have been changed…” thing – but anyone I’ve represented in these tales would immediately recognize themselves in my words.  This has made some stories impossible to tell, some of which I’d very much like to share.


You may wonder, as you often do, what I am getting at.


I’d like to tell you a little bit about my wife, Marci.  I’m in a weird situation here, the vast majority of the folks that read this know her, so, I don’t really need to give her curriculum vitae.  I don’t really feel like it’s my business to share her business, so, there’s no need to tell you all what she does, short of that what she does is in service to others.


She’s a wonderful wife and mother.  She’s my best friend and confidant.  She’s funny and cute and usually pretty happy.  She is kind and understanding and clever and…


Listen, I could tell you about this Christmas, about how the Nintendo Switch the boys got glitched out and “error code” died.  She got on her phone and laptop and dealt with it for hours.  In less than two days a new one arrived and the old one was gone.  I would have just gone ballistic on someone and we’d still be waiting for resolution.


I could tell you how easily she makes friends, how she’s good friends with the ex-wife of an old college friend of mine and the current spouse of another, and they get together more than I see my old pals.  People are drawn to her.  People care deeply for her.  She shines.  Me, not so much.


What I will say is this, she’s made me a better person.  Fact.


I am kinder because of her.


I am more joyful because of her.


I am stronger in my Faith because of her.


I am more content than I have ever been because of her.


My love has never run so deep.


Because of her I have a family and a home and a dinner table and good shoes and self-worth and… sons – things I never knew I wanted or were even possible for me.


Dreams I never knew to dream have come true.


She’s given me so much and I’ve no idea how to thank her for it all.


There’s a song from a band called Sister Hazel, the chorus is:


“It's hard to say what it is I see in you
Wonder if I'll always be with you
But words can't say,


It might seem trite, cliché even, but it’s true.


Can I be honest with you?  Over the years I’ve read a lot of bloggers and the like who seem to, well, bitch a lot about how hard being a parent, especially a stay-at-home-parent, can be.  Mostly they complain about the labor of washing and cleaning and cooking and such, but they also whine about how emotionally difficult it can be.  I’ve never felt that way, in fact I’m always surprised at, and, even found offensive, some of these notions.


I’m not saying it isn’t hard, ‘cause it really is, or that it’s not emotionally draining, because, well… kids.  But, to resent that seems counter-indicated at best, but, mostly, it just seems sad.


I don’t hate every load of laundry I do, every floor I sweep, every meal I prepare.  I don’t sit and seethe on the tractor as I mow the lawn on a hot summer day.  I don’t wait fuming in the school parking lot waiting for play practice to let out.  I don’t mind the snow-shoveling or the weeding or the wood-splitting.


I never cussed at the dirty diapers, or projectile vomiting.  I never hated the messes.  Never rued the long trips in car seats or the hot afternoon t-ball games.


I won’t hate waiting up late for them to get home as they get older.  I will not be afraid to teach them to drive in just a couple of years. I won’t question their decisions – if made wisely – or try to change them.


Do I, did I, will I find these things hard?  Of course, yes, labor and hard emotional effort suck sometimes.  But, I knew I was better for doing them, in fact, I know it's the least I can do for what I've received.


But, more than anything, I love what I have been given the opportunity to do.


It is because of Marci that I have this chance - this chance to be of service, to help, to teach, to love, to preach, to be a good man.


“It’s all for you,” sweetheart, you’re the best one.  I cannot underemphasize that.


On February second, two-thousand-and-two we were married at Bellarmine Chapel on the campus of Xavier University. 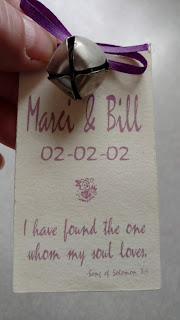 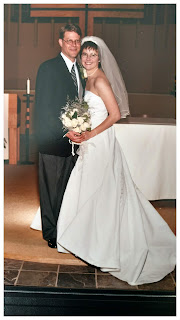 And, yes, the second of February is indeed Groundhog Day, thanks for asking.  (There was a groundhog groom's cake.  True story.)

Thanks for coming around today.  Try to remember the honor and joy at serving others and at being served.

I hope it's not seemed to corny, but, love goes that way sometimes, don't it?

I love you, Miss Marci...  thanks for saying yes.