I try not to give advice.  I could, mind you, and I do when it seems like it might help.  But, giving unsolicited advice is basically “mansplaining” – which I loathe – mixed with high self-regard – which I also disdain.  It’s like “I’m going to detail my opinion, which you don’t want to hear in the first place.”  I don’t really take advice well either, I mean, I take it when it is good but, speaking of high self-regard, I probably came to the same conclusion already.

So, uh, I’m… well, I’m gonna offer some advice today.  You already know all the big advice, the general things - make sure kids get enough sleep, feed them a relatively healthy diet but do not fret if they won’t eat, keep on a schedule, read to them often and early, wait as long as you possibly can to introduce electronic devices, you know them – but, I like specific things, details.

For instance, you know all that stuff kids bring home, especially in the early years, well, you can’t keep it all – I’ve tried – it’ll all soon crumble and turn to dust.  However, my advice is to take that smartphone, the one in your hand right now, and take a picture of it, or scan it if it’s not chalk and leaves and sticks.  If you are new to this blog, that’s what I did initially here and…  I’m really glad I did.

We still do it, just the other night we were at the middle school play and Marci to a quick snap of their little “bios” in the program: 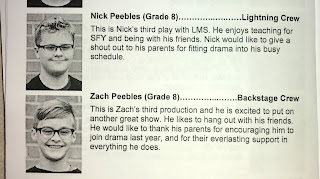 Yeah, I know, they are pretty sweet kids.

Also, once in a while, print some pictures and put them in a photobook.  I treasure the ones my mother so lovingly made, I think the boys will love theirs as well.

It seems I could go on giving advice.  Huh, maybe I do give it…

Believe it or not, I did come here today with a point, and an actual idea of what I wanted to say.  I just haven’t gotten there yet.  I said above to read to them often and early.  I mentioned here before that for probably nine or ten years, we read to the boys before bed, often at the very table I’m at right now, and usually with an apple or crackers or ice cream snack.  Narnia, Potter, Magic Tree House, Artemas Fowl  and, well, a bunch of others.  These days, if we can, the boys take a half hour or so just before bed to read (and detox their eyes from the chromebook screens) and have for the past three or four years, I’d guess.

So, they have read a lot of books in those years and, finally, here’s my suggestion: if there is a book your child really enjoyed read it yourself.  Both Marci and I have done this over the years - in fact I remember a post about a book called Pie, which Nick very much liked - and it helps a couple of ways.

Foremost, I’d say it is a way to honor and respect your kids.  For them to know that you value their opinion on a book and are willing to read it, that’s a good thing for a child.

Secondly, well, you get a nice look into their intellect and likes and hopes and, if you don’t mind me getting too hippie-dippie (a psychosocial analytical term) you can get a peak at that soul they, and you, are slowly getting to know.

Recently, Z-man finished a book and was raving about it.  It is a book called The Looking Glass by Janet McNally.  There is a quote from a review on the cover, “A bittersweet modern fairy tale, tinged with magical realism, that will touch hearts.”  The inside cover describes the novel as being about two sisters, both upcoming ballet stars, one disappears and the other, younger sister, goes on a quest to find her.  Not a subject I would have thought Z would have gone for.  Frankly, and I hate to say this, but it is true and the world can’t seem to get away from it, it is probably a “girl” book.

Both Marci and I were intrigued enough by his enthusiasm to read the book.  I don’t think Marci thought it was all that, and, actually I didn’t either.  But here’s a few things I think I came to understand about him, things I probably already knew, but which were reinforced by the book.

I won’t go into deep detail, I don’t want to bear his heart here, but I can circle around the things I think drew him in.

There is a strong magical realism element, particularly in one device the author uses well -  a childhood book of fairy tales which both girls loved sort of reenters their lives.  Later, the younger sister, the searcher, begins to see scenes and vignettes which seem to come directly out of the books, or, they could simply be coincidence.  This is never made quite clear, leaving the reader to decide that for himself.  Zack really liked that part.

The older sister, the one who runs away, is an opiate addict struggling to get clean.  I know, rough stuff, but I think he feels ready for these themes and difficult subject matter.  Heck, Twain and Orwell and beautiful, tender Scout, and so many masterpieces are headed right for them and I think books like this make them, the boys, ready for those.

There is gay best friend, a strong and dependable new boyfriend, other good and trustworthy friends and a sibling love and rivalry that is indeed “bittersweet” as so many are.

I’d better stop there.  I will say that when I was a freshman in high school, just a year older then the boys are, a dear librarian gave me a book to read.  A big book, Herman Wouk’s The Winds of War. One of the main characters in the book, Natalie, was my first well, crush, I guess… you know.

We find ourselves, you and I, kind reader, at the beginning of a new year and I wonder how it will go.  I sense change in the wind of time, but, honestly, isn’t that always the case?  Lots of things will change – the boys will enter high school, likes and interests will be different, girls may become a bigger, uh… point of focus – all those happy starts Shel Silverstein wrote of in his last book, published posthumously:

“There are no happy endings.
Endings are the saddest part,
So just give me a happy middle
And a very happy start.”
― Shel Silverstein, Every Thing on It

But, I sense a different change.  It is not a foreboding feeling it’s just that…

Nope, I can’t quite figure it.

Here are a couple of things from Marci’s “...things you don't expect to hear from the backseat ...”

I love non sequitars, especially when they hold some truth.

Boy: "Are you taking us to military school?"

Peace and Happy New Year and all that.  I’ll get back to you when I figure what’s blowing in, if I do.

Thanks for stopping by
Posted by Bill Peebles at 12:25 PM 1 comment: