On Maths and Misspellings


For nearly seven years I've maintained this page.  It is hard to say why - although I have tried, over and over and over - I have composed nearly five-hundred posts.  I suppose that is because of the quicksilver quality of intent.  Early on it was quirky and fun, bordering on silly, towards the middle it was about storytelling and these days, well, the mercury has slipped from my hand.

For instance, there was a time when I teased a lot about Nick's spelling mistakes - don't get me wrong, I still think they are hilarious - but, as I look at this now, today, a different perspective presents.  He tried. He didn't care if he couldn't spell a word, he used it anyway.  If he spelled "seconds" "cecants" or tried "explanishion" for "explaination," who cares?

Here's the thing, he's still trying on words.  He has a wonderful, clever and almost playful relationship with words these days.  Sometimes, still, he may use a word incorrectly, but, often, there is a sort of loveliness in his mistakes.  The other day he used a mashup that still echoes in my mind, "aloneliness" for "you know, when you are by yourself in your room and missing your friends."

Indeed, Nick, I do know that feeling.


More than once over the years, I poked a little fun at Zack's weird math problems and charts and such.  There were a lot of numbers in the, well, stuff he crafted and drew and noted.  There are a couple of examples in this post, The Quirky Little Math Piece (or Move Over Einstein) (no, your title's too long).  In it he did a strange backwards equation, and another, stranger, algebraic-like thing.  When he handed it to me he asked, "Is it right?"

I told him it was.

He still likes to get things right and the math has gotten much more accurate. 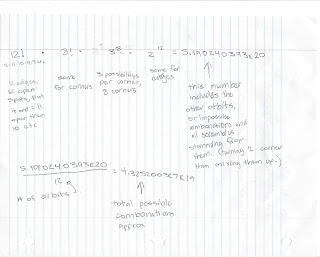 This is on the opposite side:

Finally, he got out the graph paper to present his final answer, showing his work: 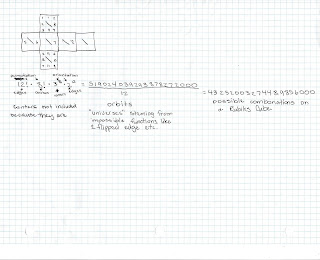 I don't really get what it is, something to do with the total possible permutations on a Rubik's cube.  He says it's right, I don't doubt it.


I spoke earlier of intent.  Boy, that's a rabbit hole of a word - but it comes down to purpose, reason.  'Intentionality' is actually a philosophical concept.  Although it all seems clear in the definition, my intentions have been anything but - they've shifted, morphed, evolved, wavered.  They've at times been pure and true and at other times they have been misguided, mismanaged, muddled.

This is the part where I conclude with one all-encompassing theory of intent.  I shone a light on the misspellings and maths way back when because I thought it was cute and fun, which they were.  Today though, I see what they are doing now, who they are becoming, with such deeper clarity because of those very things.

So, here's my theory:  We can't know intent, we can only guess at it.

From Marci's "... things you don't expect to hear from the backseat at the breakfast table ..." 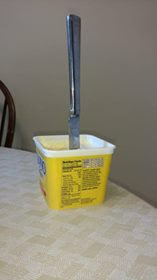 Yes, indeed you are correct, Nick said it...


Thanks for stopping by, quite a "sellabrashin" wouldn't you say?

(If you were to view my blog in a real web browser, in other words, not the lame mobile mode, you'd see that there are "random" posts, and an archive and a whole bunch of "topics" off to the left of the posts.  One of them is "misspellings" and another is "take-home folder."  Some of them are really sweet and cute... just thought I'd let you know.)

Posted by Bill Peebles at 12:12 PM No comments: