My soul has been a bit sad lately, my heart a little achy.

Do I know why?

I think it’s because I’m human.

I also think it’s my smartphone…  (I’ve never typed that word before in my life.)

I’m not going to tell you why, you already know.  You’re very likely reading this on one.  That’s why I’m trying not to use long sentences or paragraphs, nobody wants that on a teeny-tiny-ass screen.  Dammit, that was long…

You already know how bombarded one can feel on social media.

You already know the hollowness of comparing yourself to others in your circles.

You also know the emptiness that digital communication leaves in us, the ice between the ones and zeros.

You know the isolation of the so-called connectivity - head down, shoulders in – lost in absolutely nothing.

Listen, maybe I shouldn’t assume you feel the same as I do.  I’m sure many of you use your phone with great care and prudence.

You know what?  I can’t maintain this style.  I can’t continue on with these short sentences and I love long paragraphs and I like to juxtapose them to short ones.  It’s a balance game writers like to play, to visually move the reader’s eyes and encourage them to move along in the narrative, an impossible tactic on a three by five screen.

As all boys do, I watched my father a lot growing up.  He whistled and I learned to whistle.  He put his hands in his pockets, I still do.  He crossed his right leg over his left, so did I.  And, he smoked and so did I for over thirty years.

I don’t have many moving-picture-like memories, I tend more towards polaroids and panoramic landscapes, Dutch still-lifes and a nude or two.  One of the few I do have is a short scene of my dad getting up from his chair in my childhood home.  He is dressed in a suit, a charcoal one, as was the fashion in the late fifties and well into the sixties when this takes place.  He is slim and the suit fits him nicely, he has a muted maroon bowtie on and brown loafers and belt.

The light is morning like, I’d guess we are headed for church.  His chair has a footstool which he likes close when he puts his feet up.  My mother calls and he brings his knees up and gets his feet on his side of the stool and pushes it out so he can stand.  His hands go to his knees, I can still see his turquoise and gold ring, he makes the dad grunt and sort of rocks up still bent at the waist, he straightens up slowly.  I don’t think he sees me watching him even though I feel close, close enough to smell his Old Spice, black coffee and Camels.

As he gathers himself he absented-mindedly taps his hand on his left breast.  The hand, not satisfied, then reaches inside the coat, first into his shirt pocket, then the inside pocket of the jacket.  Now, both hands, in tandem, quickly shoot into the outside pockets of the jacket – they worked back then – and then into the front pockets of the slacks.  These jingle satisfactorily, but the dance goes on to the back pockets where they linger.  He looks silly, in fact, it all seems silly.

Finally, he looks down and over at me.  He smiles at me and cocks his head as he sees them out of the corner of his eye, a pack of Camel’s and a white book of matches.  His face is pleased, relieved.  He chuckles at himself, as men do, and winks at me as he put them in the inside pocket of his coat, pats them knowingly a couple of times, deftly buttons his coat with one hand and walks towards the kitchen.

More than anything, what impressed my little eight- or nine-year-old self was his satisfaction at finding them and, to some extent, the matching anxiety at not having them.  Years and years later, I worked in a restaurant where, as a bartender, I wore a suit and tie every day.  I probably did that cigarette dance a dozen times a week.  I caught myself at it one time in the mirror behind the scotch and bourbon and saw my father, I gave myself the same wink he had given me that Sunday morning past.

Why, I wonder, am I bringing this up?  Because, I see this same dance these days, but now it’s for a phone.  Just last week at the grocery store I saw a lady do the extended version of it.  As she stood just outside her car, door still open, with growing anxiety she checked all her pockets and rifled somewhat madly through her purse, finally ducking back into the car and coming back up with that satisfied, relieved look, and… a phone clutched triumphantly in her hand.

I watched smokers for years as a bartender and waiter, back in the days of smoking sections and lounges.  I’ve watched, as, mid conversation a hand reaches for a pack and, with seemingly no concentration or effort a smoke was acquired and lit.  The same way I see folks so absentmindedly reach for their smartphones these days.  I’ve seen the agitation of a guy out of cigarettes concerned about when he’ll get another mirrored in the look of someone whose phone is out of power or, worse, not connected.  I’ve watched as one person at my bar lit a cigarette and the whole bar lighting up at the scent of the first just as I’ve seen one person check their phone and watched as those around them looked at theirs.

I read an article I can’t find right now that said something to the affect that in fifteen or twenty years we’ll all be wondering what the hell we were thinking giving iPhones and androids to children, just as we wonder now what society was thinking when we let – encouraged, really - young men and women begin smoking in their teens.

I know you may be thinking that this analogy is a little dire and, seeing it here in black and white, I’d tend to agree.  However, I know what addiction feels like, I know its ups and downs, its desire and relief.  I know the dopamine rush as well as the physical anticipation of that next hit.  I know how good the ritual of an addiction feels, how true and real the desire for a thing can be.  I know.

And, as God is my witness, my smartphone feeds that cycle today just as surely as those Marlboros did for all those years.

I don’t like it.  What’s weird is, truth be told, I liked smoking and damn near every cigarette was enjoyable, honest.

Not with my smartphone.  It mostly just pisses me off and disappoints me.  The news is so dire, so ugly mean and intense.  So much so that, for me, even a decent, happy story, a “feel-good” story I think they call them, can taste saccharine, treacly.  Facebook consistently disappoints me.  In the early years I really enjoyed it, but now so few friends even post anything, it seems a bit pointless.

There’s one more thing I’d like to say:  I am not on this earth to be advertised to…

Well, that’s not a very good sentence.  Listen, that smartphone is specifically designed and coded and programmed to advertise.  “Sponsored” posts on FB, ads in every video, Amazon notifications out of the blue.  Ads on the games we play, the blogs we read, the podcasts and vlogs.  I won’t go on.

Damn, I completely forgot you were reading this on your phone.

I will set my phone down where the house phone used to be - it's a pretty spot - and turn up the ringer and hope for the best.   It'll be right here, on top of that wooden box, nestled under the shamrock which I noticed has two hidden blooms: 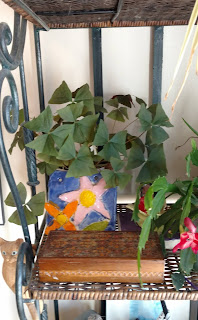 You see, I still need a communication device, I like texting and I need to get phone calls.  That’s the insidiousness of the whole thing, something you need, something useful, paired with this lame entertainment device that just wants to separate us from our money.  That’s fucked up.

(My apologies again to those using great care and prudence with their phones, and those few who still read things on their computer.)

I plan to keep writing here, but I won’t be able to promote them by posting on FB, so ya’ll won’t know it’s here.  Oh, well…

Keep in mind these are just my observations, my responses, my feelings.  One cannot qualify every statement and sentence with an “IMHO” or “for me” or “I can’t speak for you, but…” in a bit of writing, it becomes tedious.

I’ll probably return to FB after Easter, but, I hope to get rid of this phone for good.

It sorta burns my hand…

Look me up sometime if you think of me.