This is what I rushed down to see the other day after Z yelled, in his 'emergency' voice:  "Dad, you gotta come see this!"  (Of course I'm thinking should I dial 9-1- or at least grab a towel for the blood.) 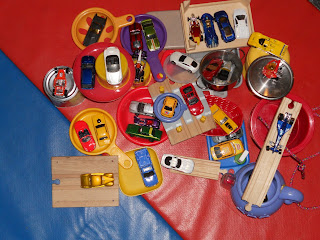 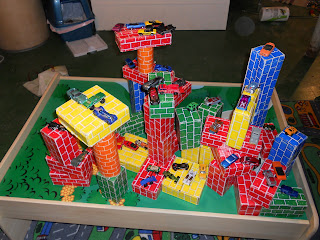 Yeah, WTF would be the appropriate response.  This is what I have come to call 'hairbrainage,' not to be confused with 'dumbf***ery' which I will get to in another post.  'Hairbrainage' is defined as:  'the results of misguided or flawed thinking which are inexplicable  to those uninvolved in their making. (see bower bird)'  It's a real thing, that I , well, made up...

The first pic is N's creation, play plates and Hot Wheels and a stray can and a piece of track arranged, in my opinion, very artistically with a great sense of color.  The second is Z who has broken into the third dimension using those ubiquitous cardboard blocks and the even more ever-present Hot Wheels.

They were so excited by these odd creations into which so much energy and passion had been put.  I stood in silent awe and said, "My."  A word I save for when I am truly rendered dumbstruck.  I took the pictures (or they would have had to stay up until hell freezes) and they pushed them down and stomped through them Godzilla-style (although they are without that antecedent) and found some other windmills to slay.

Later, as I sat looking at these pictures, reflecting, I was struck by the significance of their insignificance.  I can't tell you how many times I have come upon these sorts of utterly baffling presentations and displays, marveling at the energy, time and intellect they've taken, and simply wonder, "why?"  This time an answer revealed itself as I looked closely at the details, the precision of their work, the obvious choices they had so carefully made.  The answer wasn't: 'Because we could.'  The answer was 'Because we had to.'  These things have an imperity that I don't understand, which is a way of saying, that I've forgotten.

I sometimes wish that something, anything, could have that sort of native, naive importance.