The Green Ball of Gratitude


I was going to do a lot of other stuff today.   I had great plans, long meaningful lists, spellbinding, heartfelt stories.  Perhaps a retrospective piece hot-linking popular posts here, assembling a beautiful collage of whimsy, hope, dreams and tears.

You see, this is my 300th published post.  I was gonna drop some whopping numbers on you involving average word count per post, say a thousand, and how that would be about three good sized novels worth of words.  I was also going to self-servingly mention the novel I wrote, and, well, basically, I was going to brag, "humble-brag" I think they call it these days.

I would have, too, except today is a windy day.

I am sitting in the dining room, my candle lit, my swollen head ready to impress you.  I put my fingers on the keypad, look out into the yard to collect my deep thoughts and, well, this blows into view: 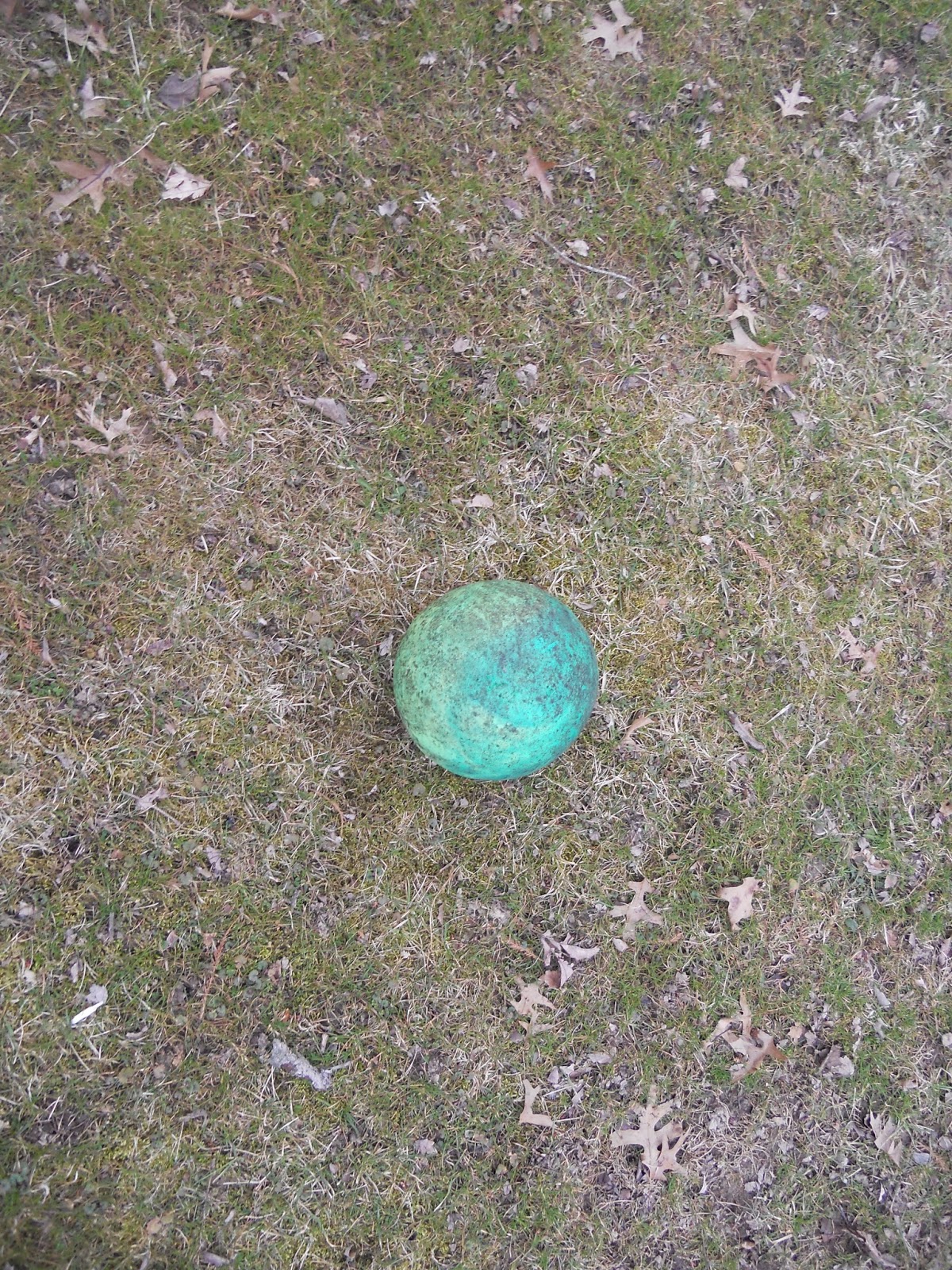 I stop typing, hang my head, sigh, and remember.  I bought it in a whim, I doubt the boys were even two.  They were with me at a grocery store, up there in front - in the double wide - and I wheeled them past, not even noticing the giant bin of "made in China" balls.  The boys heard the siren sound that is a ball to boys and I got two, this green one and a red one, which met an early death at the blade of a lawn tractor.

But this guy... I would say this was the first ball they ever kicked outside.  I know it was the ball I used to explain soccer and kick-ball.  I know it was an integral part of the first game the ever invented on their own which involved two plastic hockey sticks, this ball, a fence and, oddly enough, a hickory nut... or was it a feather?

This ball has been imagined into everything from a cannon ball - basically any weapon ammo, honestly - to a damsel in distress high in the pine boughs in which it was stuck, the tree they eventually climbed, enticed by this little ball.  I think I may have put it in the shed or the garage the first couple of years, but, for the last several it has been the only toy I have let just stay out.  One spring I found it safely wedged in the opening of a tunnel under the shed, where Woody, the gopher/woodchuck dude is alleged to live.  The boys imagined he used it as a door to keep out the wind and snow.

Imagine a back yard full of boys chasing, kicking, throwing this ball gallantly taking them all on.  I remember four boys once throwing sticks like spears at it and the falling down laughter that followed as it blew across the yard seemingly trying to escape their unheeded assault.  I've seen it fly over the fence and taunt a boy too little to climb a fence to, well, climb a fence.  I talked him through it with tears in my eyes as the metaphorical fences fell and the future seemed bigger, because of one brave little ball.

After the assault of memories that flashed in the instant I saw the ball, I knew.  I knew what I had to do.  I wander out into the yard now populated with three and five and seven and two year-old boys, dancing, running, singing, kicking, growing and learning, and I look down on it and take the a picture of it from above.  The color is off, there is no banana for scale, it seems lifeless, inert, and I know it is not.  I kneel down in the muddy yard and I snap the picture with the playset and the rope-swing and the fence and the maple tree in the background.  The ball is covered in a patina of dirt, slightly deflated, but somehow noble, decent, stalwart, proud. 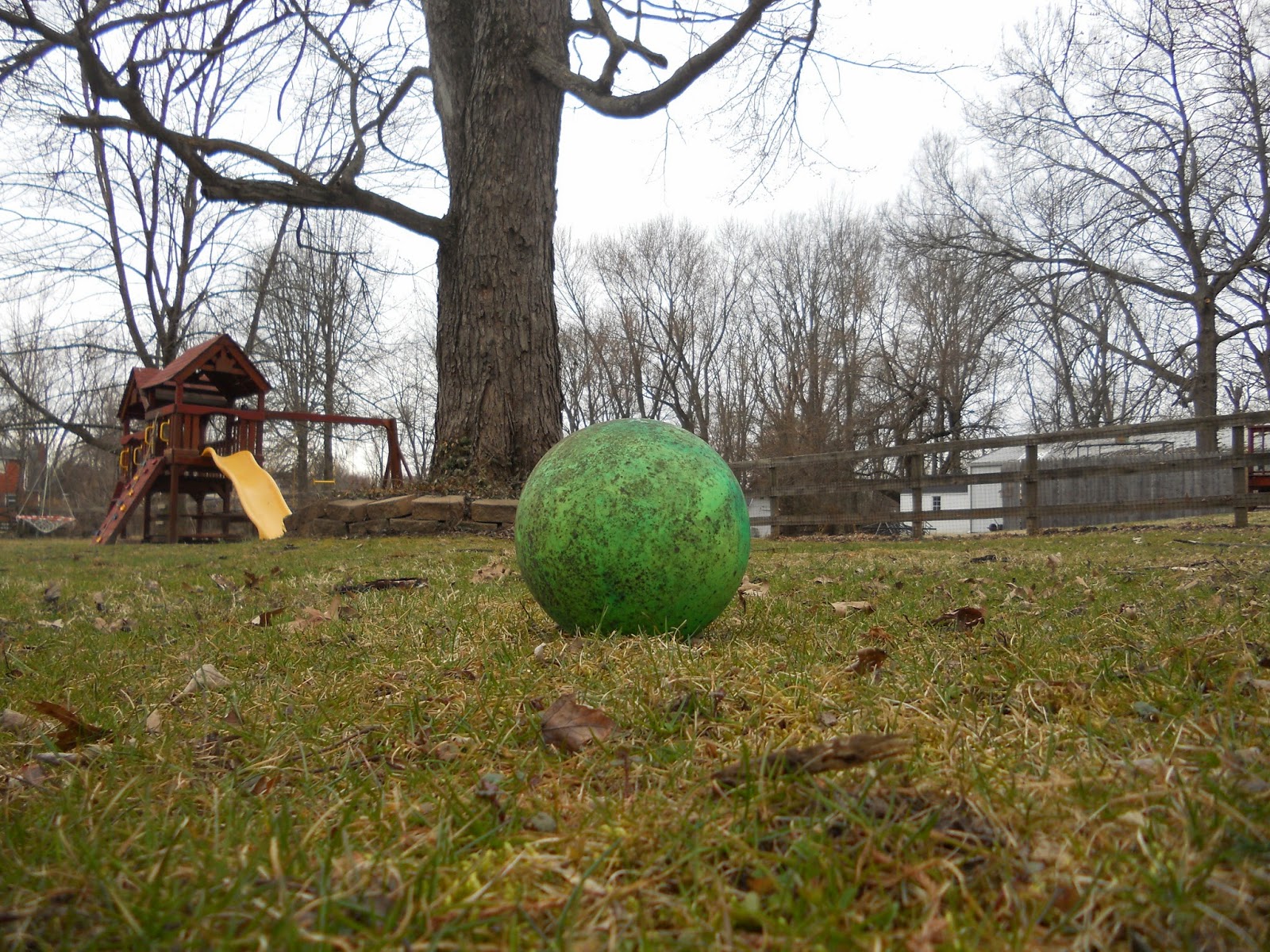 I pick it up and it seems to sigh.  Instantly I get it.  This ball, over the years, through snow and rain and drought and mud and wind has done one thing, a sacred thing, an act of profound love - it has been available.  I realize, choking back the familiar sob of deep understanding, that that is precisely what I have tried to do for them.  I have tried to be available, weather the storms, be ready, be strong, be brave... be there.

So, there I am, standing in my yard of dreams, tears washing clean a dirty green ball and I do the most natural thing, the one thing the ball wants, the only gift of thanks I can give it... I kick it.  It soars up and the wind embraces it and it sails much higher and much farther than it should have, over the fence, into another yard.


Thanks for being with me here, on this journey, I appreciate it.  Be available for others today, everyday.  Be a green ball, be the hope that is in the eyes of children and the truth that is at the soul of every hard-working toy ever made.