I don't have a bar to call my own anymore.  You know, where everybody knows your name, and they're always glad you came.

I suppose that's sort of a surprising thing to say, like admitting I'm a drunk or something of a barfly or a cad.  No, and guys back me up here, it's nice to have a place to go and watch a game and shoot the shit with some other guys and, well, I miss it.

As most of you already know I was a long time in the restaurant business and, by and large, my bar was usually the one at the place I worked.  For about ten years I was a bartender and stood on one side and when I was done, often, I sat on the other side.  Sometimes, though, I went somewhere else, somewhere to get away from the place I'd been for ten or twelve or fourteen hours, often a place where other restaurant types hung out.

I lived in NYC for a number of years in the nineteen-hundred-and-eighties and I had a bar there, on Second Street I think, called Kennedy's.  I initially went there because it was open late, like four in the morning late, and I could get there after I closed the bar I was tending.  It was a great place, the bartender knew my name, I had a tab and I knew a lot of people there.  In fact, one night, I was in a heated conversation with some old fart sitting next to me, it was a political battle and I have no memory of the specifics.  It was all good-natured and he bought me a couple drinks.  As we were winding down, a driver, capped and uniformed, came through the doors and the fellow I was speaking with shook my hand and said he had to go.  He left an unusually large tip, smiled at Manny, the enormous Irishman behind the bar, and he left.  I watched as he got into a stretch limo and rolled away.

I asked Manny who the hell that was and he said...

... in his perfect Irish Brogue "Dontcha know who that was, laddie?"  I confessed that I did not.

Well, I don't really see what this has to do with Nick and Zack.  I mean really, bar stories...

I don't remember asking you.  Anyway, we decided that stories and stuff about me is appropriate for this space because it will show them who I was once, the kind of fella I was when I was younger, that sort of thing.

Uh, yeah, well, actually you decided that.  I thought we were going to talk about the end of the sports season and how you missed coaching and, you know, those picture of the boys in their uniforms.  Remember?  They're so cute...

Maybe some other time, listen I'm right in the middle of a story here, do you mind?

Oh, by all means go on, bespot your reputation, name drop, all that self-serving crap.  Go ahead.

Well, as it turns out my intellectual sparring partner was none-other than Senator Patrick Moynihan and man, he was drunk and ...  Wait, what do you mean by "self-serving crap?"

I simply mean that you go on and on about loving and honoring the boys and yet, today, you haven't even mentioned them.  That's all.  It's cool.  You're good.

So, as I was saying before I was so rudely interrupted, I don't have a bar of my own anymore.  I don't have a place where I can just be myself, say inappropriate things to my friends, eat chicken wings, do shots, flirt a little, pretend to be interested in a game, that sort of thing...

If I had a bar to go to I would show all my buddies there pictures like this: 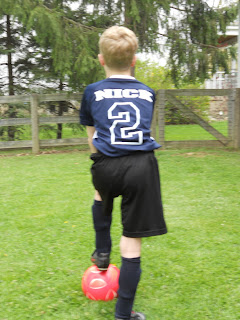 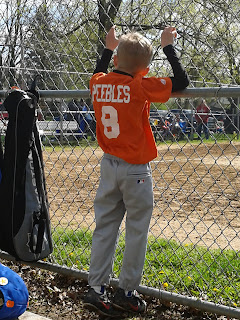 And, I'd have someone to tell how much I wished Zack could hit a little better, maybe get some advice for lefties.  I'd have a couple of pretty girls notice me and say how cute my boys were and they might mention that I was a great Dad for worrying so about my son's hitting.

I might say that my other son is really a great ball-handler and that I wish he took a few more shots on goal but his coach said he was a middle-fielder and maybe someone would be able to explain what a middle-fielder was and what offsides was and what "mark up" (which all the cool parents yell at games) means.

If I had a bar, that's how it would be, supportive and caring and...

Yeah.  It is self-serving and crappy.

You're just saying that...

No, I'm not.  What else would you like in a bar of your very own?

Maybe I could buy that guy who makes LEGO videos a beer and maybe he'd tell me how he does it and offer to help me with the the video I want to make of all the boys stuffed animals.  I could look him in the eye and tell him that I really love those stupid videos and I'd tell him why.  Probably after a couple of shots or...

I don't really think the drink tally is necessary, we get it, your tipsy, (read drunk)...

Well, I'd look him in the eye and I'd tell him I admire those videos so much because I can feel his love for his boys through them.  Through all the layers and filters and programs and apps; through all the lenses and digitization; through the blogosphere around the wires and cables; through sheer nothingness, through all that I know he does it out of love.  I can feel it.  I'd imagine he'd thank me, and maybe when he went home he'd give me a hug and say he'd see me again soon.

Oh, a lot of guys.  That guy who talks about his precocious daughter.  He seems like a great guy.  He's sorta young with a wise soul.  I'd say I love his blog and I think he should write some serious prose because his soul has something to say.  I'd tell him that he gets it, that I can see him glow, somehow, with nothing short of Grace.  Oh, and maybe he'd hand me one of those stick-figure aprons and the bartender would steal it and wear it for all time.

Do guys really act like that in bars?  That's cute...

If I could stand next to them all, shoulder to shoulder, I know I'd know the mettle of the men there.  There would be mechanics with wild imaginations and dreams as big as mountains.  There would be pious men to guide us and and tease our madness, shaking there heads at our happiness.  There would be writers and artists and photographers, memoirists and plotters and hope-mongers and desperate, broken-hearted dreamers.  We'd cry rivers and laugh storms, we rage at injustice and we'd suffer the losses.

Yes, well, that's very nice, but, specifically, who else?

That gay guy.  I'd like to buy him a drink, shake his hand and thank him.  Not for being gay, or being a great designer or having such an insightful and loving blog.  No, I'd thank him for being - simply being.  I'd tell him that this is a better place, a better world, because he is in it , I know that.  I could tell him that I cried when I heard his song and vowed to help him someday; tell him I'd play guitar for him if he ever needed and he'd say now and we'd borrow Bob's guitar and stand and sing "My Two Daddies (Can Beat Up Your One)®" to the hoots and hollers and cheers of a room full of teary-eyed manly-men, who'd lustily sing the chorus with us.

I'd tell that one guy with the funny accent that I really admire his leadership skills and I am glad he's in my bar.  I could tell him that it was because of him that I forged forward when I felt that I was flagging, because of him I opened my eyes wider and began to see the new world I'd entered.  I'd tell him if anyone was doing it right, it was him.  Yeah, I'd buy him a beer.

And old Aristotle would be hanging out in his pink bathrobe and straggly-ass beard and ...

Uh, maybe, he was just playing some tunes in the background.

No celebrities either.  You're short on time and this is getting sorta long.  You should probably wrap it up.

We'd show each other pictures and we'd tell stories.  We'd all bring in those little envelopes of pictures you used to get developed at the drugstore before there was another choice and we'd show each other ones like these of the vines we planted and later I'd have little bags of fresh tomatoes for everyone. 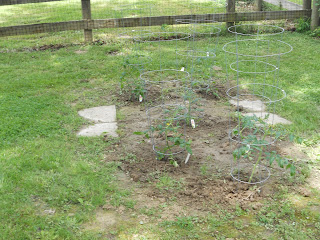 I could show them this little picture I took of the snapdragon and zinnia the boys insisted on buying and we planted by the porch step and someone would ask me "why the hell ya take a picture of that" and I'd answer that I know the poor little things have got no chance, what with the soccer balls and baseballs and trampsing in and out, no chance, so, I took a picture. 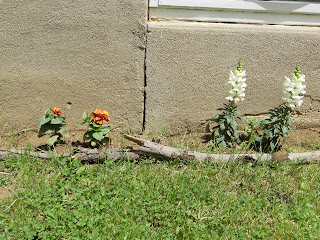 I'd look at some guy's grand-kids and someone's new son, we'd gush about how beautiful so-and-so was at her preschool graduation and laugh as we discuss breast-feeding and feeding our kids dreams and feeding in general.

I'd show them this and tell them the complicated rules of the game they are playing and we'd all have a laugh and think wistfully back on our own lost and - sadly - rarely remembered childhoods: 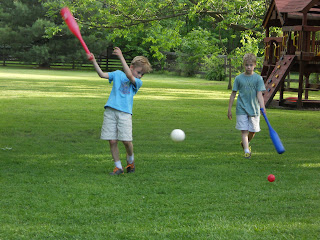 To cheer everyone up I'd show them the pictures the boys drew at school of flowers in a vase and jokingly admit that I wanted to have them scanned and printed and hung in those very frames and actually use them as the art in the dining room and everyone would encourage me and we'd have a laugh ten years later when the picture were still up, and still making me smile. 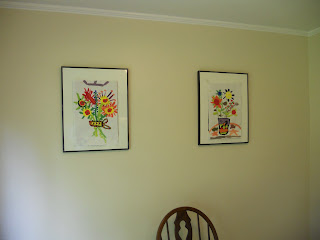 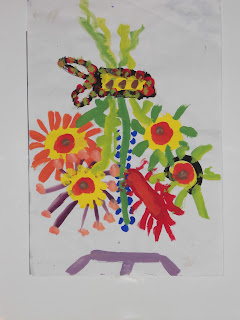 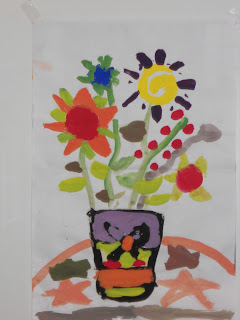 But I'm having fun, all the guys are here and...

We gotta go, we gotta get up early and, well...

So, you know how sometimes my dear wife hears things the boys say and posts them on her FB page.  Well maybe, in my bar, there could be place, like in the hallway to the kitchen, where you could post-it a little thought you needed help with, or support with, or, perhaps just a silly thing your kid said like, say:

You planned all this from the very start, didn't you?

Yeah, sort of, but it would have been too long if you hadn't interrupted.

It is still too long.

I dunno, you haven't been too clear on that, either...


Oh, good God, that picture of Nick's still life is upside down.  You should fix that.