I am having trouble getting started today.  Here's what I have so far...


Words to include: ennue (look up how to spell it), denounment (ibid.), savored, and either cherish or honor, or both (the words I purposefully repeat in a great deal of my posts, for emphasis).

Ideas to include:  An aborted Halloween rant; the last rose of summer and the last known diaper in the house, an analogy; how and why Bob got in the way of things and the nature of his quest; the time Zack said: "but it's important to me, Dad"; a little story about the manners paper Nick made which his teacher is making in to a "real poster."

Other considerations:  Perhaps a Play-Doh reference wrapped in with the crap about the diapers.  Avoid calculation of how many diapers I have changed.  Wax poetic on something or 'nuther.  Self-deprecate amusingly.  Avoid overwriting and using run on sentences and generally using too many damned words.  Add at least on pointless aside, on something like, say, guitar strings or lawn-mowing.

Needed:  A device to include all these things in one post and a pot of coffee.

Note:  Use italics to show result.

Well, let me think about it while I go get a cup of coffee...


A couple years ago now we received a lovely little rose bush, a Knockout, I think it is called.  It does well planted out next to the shed, and it seems like, late every fall, it produces one last hurrah of blooms.  I think of the line about 'the last rose of summer.'  I've always thought that a beautiful sentiment.

I wonder if I thought that when I put those last three diapers up on the shelf a couple years ago now, that they are the last of the thousands, I won't do the calculations, of diapers used around here.  I don't miss the diapers, but I do miss the one-on-one face time changing them gave.  It's a great time for kids to show their personalities, to giggle, to ask.

So, when I found the diapers on the shelf, next to the nearly forgotten Plah-Doh, I thought of 'the last rose of summer.'  I thought of the beauty the diapers represented, the joy I had laughing with the boys as we changed on that table, also forgotten.  And just as I did with the roses by the shed, I savored them, I smiled when I realized what they were, I laughed to think these were the last, and, as with a rose, I nearly fell to my knees as the baby pure scent came off of them.  Forever, roses and diapers will make me weep. 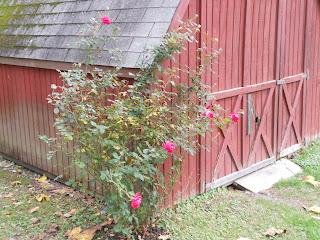 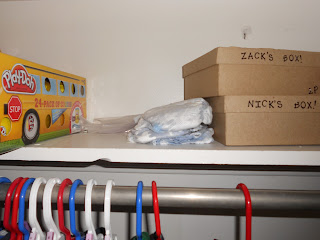 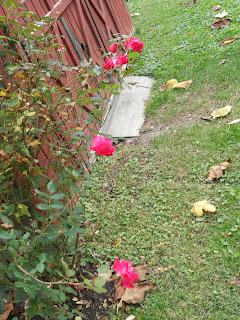 I think endings are particularly relevant here.  We are suffering the ennui of some significant denouements around here.  The Evil Avocados ended their particularly satisfying season and, sadly Halloween is over.  I have for some time been preparing a long and dangerously snarcastic tirade against Halloween.  I don't like it, I think it is silly and stupid and...

"I have to finish this battle," he said.

"But I'm in the middle of this battle and blah blah..."  I had stopped listening because it was time for dinner.

"But Dad, It's important to me right now," I wise little voice creaked through a sob.

I broke, literally.  My heart cracked, my eyes teared up, my soul sighed.  I had to honor him.

"You're right, son, it is important to you right now.  Show me what you are doing and let's finish that battle."

This conversation is one of the reasons I don't have the heart to go on about the six pounds of candy they accumulated in less than an hour, about the silly parade at their school, about the...  You know what, the boys get to dress up in something wacky, adults are cool with it and give them candy, they march around at school, they get to eat candy for weeks afterward and it makes them happy, the whole thing, Halloween, it is what they love.  Perfect is how I should describe it.  An ideal holiday from a child's perspective.

So the other reason I won't rant about it is Bob: 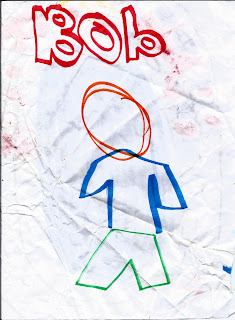 I mean, how can you rant when Bob's around.  The opposite side of this picture of Bob is this: 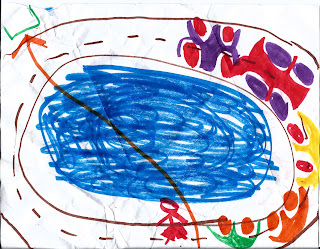 Bob has to get out of the middle of the racetrack, swim across the pond cross over the racetrack again and exit through the green door of safety.  Tough break, Bob.

Oh goodness, look at where the time has gone.  The reason I included the manners poster is for the same reason I included the story about what's important to Zack.  You see, the kids in the class at school all made posters when they discussed manners in class.  The teacher liked Nick's so much she apparently decided to make a full size poster of it.  He told me about this a while back, and when this came home he was very pleased to show it to me.  I really don't know how but, it ended up in the recycling bin in the garage.  I saw it when I was putting something in said bin, fished it out and laid it, temporarily, on the other bin and... forgot about it.

N saw it in the garage, on the ground, after it blew of the other bin and said to me:  "Dad, this is really important to me, why is it out here?"

I didn't explain that I rescued it from the trash.  I just told him I didn't know and quickly put it inside. 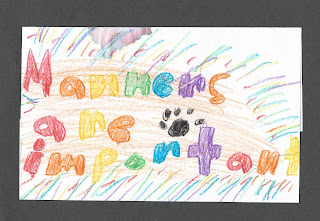 I am out of time.