(nonversation(n):  a dialogue between two people in which, although thoroughly convinced otherwise, both parties are not in agreement as to the topic)

N came home from school the other day and rushed in, rushed through his homework and his take-home folder and rushed for a piece of paper and wrote this: 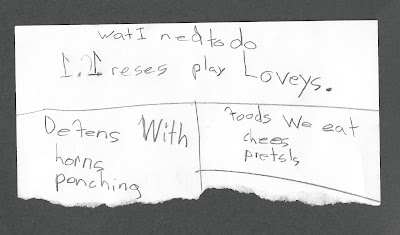 It says, using the decoder ring:  "What I need to do.  1. recess play Loveys.  Defense with horns, punching.  Foods we eat: cheese, pretzels.

(I say watchagotthere a lot.)

"Oh it's a list of the things I need to do tomorrow," he says handing me the sheet which he had ripped the bottom of off, presumably because he doesn't like seeing so much empty space.  Who does?

"It's a bunchakids on the playground and we're called the Loveys and we run around together and we like to eat stuff."

Now here's where it gets a little confusing, you see I figured that this 'bunchakids' had in common the fact that they all had objects of significance, i.e. Teddy Bears, Linus-style blankets, a wooden screwdriver, a silky scarf, you get it.  I saw it as a sort of book club, discussion group, juice-box sipping type of thing.  My bad...

"What do some of the other kids have for Loveys?"

"Well, you know, like you have Kitty and Zack has Bear-Bear, what do the other kids have?"

"Uhm, Dad, it's a club for kids, there are not cats or bears allowed... or girls, I think, except for (as i have said I refuse to implicate others in this whole mess of a childhood I am describing), they're girls, actually."

In a moment of inclarity I ask, "Why are you called Loveys, then?"

"Because we love stuff.  Like pretzels and cheese, and turkey.  Oh, man, I forgot to write that."

"Well that's great," I say, actually pleased that love is even a topic of interest in my poop-joke-loving, punch-kick-throwing, constant-kill-referencing nearly seven-year-olds.

"So what's this defense with horns and ponchos?"

"Dad," he says very slowly, treating me like the idiot I must appear to him to be, "We're the Loveys, we chase other kids around and some times we need to use our horns," here it puts fingers up by the side of his head in the universal gesture for horns (and ironically, idiots), "and we need to get better at punching."

"Uh, right.  What kids are you chasing, and why?"  And why are 'Loveys' punching?

"We chase the Hades, the kids who aren't Loveys."

In a moment of exasperation I blurt out, "What's Hell got to do with it?"

Finally Z, sensing the confusion, chimes in.  "Dad, Loveys chase Hatees."  Again very slowly, "Like love is the opposite of hate, Loveys, Hatees... get it?"

Uh, yeah Zack, I am caught up now.

What is this, Playground Crusades?  Honestly I still don't get.

From Marci's '...things you don't expect to hear from the backseat...'

I have actually been 'POWed into dead-ness,' it ain't that bad...

Email ThisBlogThis!Share to TwitterShare to FacebookShare to Pinterest
Labels: favorites, from the backseat, hairbrainage, misspellings