It might surprise you that I actually consider what I'm doing here... well, sorta, um, sometimes.

That being said, I forgot I published on Monday and don't have anything for today.  My plan was to really hone and craft the bully piece I last presented.  I'd really make it perfect.  I'd polish the metaphors and shine the similes; I'd expertly balance each juxtaposition; I'd add the detail that makes the story sing; I'd show off.  I'd design a post perfectly in sync with the zeitgeist of the nation; I'd pull heartstrings and call for action and, finally, make a damn difference.

And then, I accidentally hit "publish."

I coulda pulled it back, but, it's remarkable how quickly things happen in this internet ether.  It took me a while to figure what I'd done and by that time several kind readers had already seen it.  I took another look and realized I was done with it.  I let Fate or Karma or the Cosmos or God or Dumb Damn Luck have its way.

So now I've two images and an hour and a half...

Well that's a full four-letter word, ain't it?  I've long argued that nothing is ever "done."  I'd say that it's not a particularly valid or defensible argument.  Sure, things get done - laundry, meals, diapers, long walks on the beach, errands, romances, books.  Things end, I've written a lot about "endings," I've seen the boys finish so many things.  I see an image of a handful of soothies or or a couple of paper mache cats on a top shelf or a tooth-marked wooden screwdriver toolbox or a Hotwheels Camero on the desk or a forgotten and discarded drawing under the back seat of my truck and think, I guess they're done with that.

One could argue that every time I write about an event here or archive a drawing or capture an image, what I am doing is admitting its finality, its "doneness."


I was looking for baseball pants and/or cups in a massive pile off to a corner of the folding shelf I made for, well, folding.  All the pants are decidedly too small but I kept looking for the cups.  I set stuff on the ping-pong table, stuff I didn't know what to do with - toddler-sized beach towels we don't use, a pair of Lee jeans I look ridiculous in, pair upon pair of soccer and baseball socks, rarely needed long underwear, shirts stained to the point of embarrassment, now too small, never-worn pants too stiff and new for a then nine year old - the castaways.

Besides the self-replicating socks, the most common thing was jerseys, lots of jerseys... 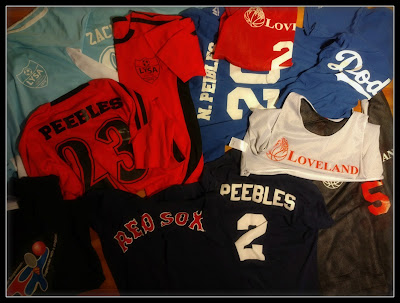 Yeah, were done with these.  They're too small, the seasons are long over.  They're not really donateable - if you know what I mean - what with the names and stains on them and all.

But, you know what?  They came in second in a big soccer tourney in those light blue jerseys, and had a fun, average season in those orange ones.  In the basketball uniforms - which are the same each year just getting bigger as the boys do - the learned fundamentals and humility and teamwork from a disarmingly giant coach who cared very much about them.  Nick hit a home-run in the Dodgers number 20 shirt and Zack designed the Superman Dodgeball logo and there on the bottom left.  That number 2 Red Sox Jersey there, Z wore it the year he found a home at first and N hit his first triple in his.

So, I take pictures of things and put them on here, things we are done with, but, of course I realize that we aren't.  It used to be that when I reflected back on my childhood, it was just that, singular, childhood, and a way long time ago; done.  But now, as I watch the boys in the middle of theirs I remember mine so vividly.  I hope archiving theirs will do the same for them.

Speaking of baseball - well, I was a paragraph or two ago - our season is beginning here.  The boys are playing under the hats of the Yankees.  Our local league decided that rather than have the players in uniforms that have the actual logo for the pro team on them they'd use a sort of pixellated camouflage in the colors of the home team and they all say "Loveland Youth Baseball."  Someday, they'll probably be in among an even bigger pile of socks and bigger outgrown pants and jeans.  I'll find them and remember back to this year...

Oh what the hell, I might as well take a picture now, shouldn't I?  Save us all this prattle next time. 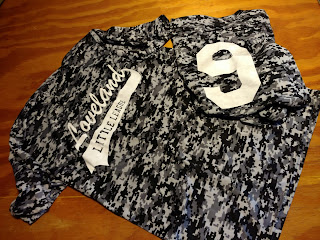 We had some batting practice the other night in the very wet and muddy back yard.  Fly balls were coming down and landing in the mud with a comical and somehow satisfying "schmolck."  The were covered in mud, like, all of them, so I took it upon myself to wipe them all down.  Z was out on the porch with me and lined them up to dry on the inside rail - the "beer rail" I think it's called.  We just put the "game balls" up there, not the cheap plasticky practice balls that don't hit for crap and slip out of your hands.

When we were done is said they looked pretty cool.  I agreed and took a photo of them the next day. 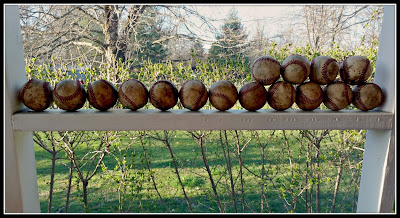 There's optimism here, I think.  All ready for the new season, with a knowledge of the past and hope for the future.

The Reds are in Spring Training in Arizona these days.  A couple of games have been on TV and at the end of nine innings the other day the coaches gave each others the "cut" sign across their necks and that was it.

I'd texted a friend that this one looked done and he texted back "The Reds were done before Spring Training even started," alluding the miserable season everyone is expecting - the dreaded "building year."

I think we put unfair expectations on our favorite teams, sometimes.  The boys and I won't stop watching baseball games because the team won't have a championship season, that, well, doesn't seem fair.  I hate fair-weather fans, it seems so shallow to me.  We'll watch Cozart, who's back after a season ending injury last year.  We'll watch to see if Billy can bunt better this year.  We'll watch to see the double plays turned by Phillips and Votto.

We'll watch new pitchers live their dreams.  We'll see the beauty in a single win, a great catch, a night game under the stars.  We watch rookies and old-timers and rookies and remember it's a game, a game for boys and boys-at-heart.

We're not done with baseball, in fact, the whole season, theirs and the Reds, is just beginning to unfold.