For the many of you (I considered few of you but I am trying to be positive) who have been following around here for the last several years, you know that I find Nick's misspelling quite amusing, and, well, a bit frustrating.  There is, in fact, a whole label devoted to it here.  In school this year there is a renewed focus on it with vocabulary and spelling tests.  I's are preceding their e's - except when... -y's are being changed to i's and ed's added, the sordid there/their/they're menage is clamoring to explain itself, that sort of thing.

Nick brought this home the other day: 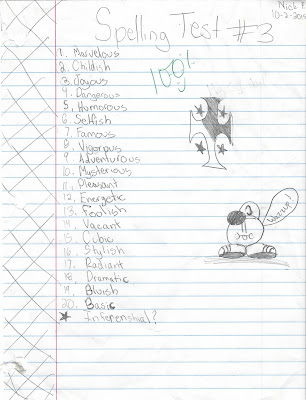 I am sad to say, my days of picking fun at them are over.  I mean 100%.  And, honestly, I am hard pressed at spelling the bonus word, inferential, as well.  I also told Nick that in my fifty years of writing I have never used that word in a sentence, there's no doctorate certification on my wall.

I am glad for him, he studied hard and we've been working on them at home, and he deserves the score.  Also - and here's where I may go too far with this - it is all a good metaphor what is happening around here, where I write these words.  I look at this and see an ending, not of everything or anything dramaticky like that, but an end to one more part of childhood.  Not only is he not going to make as many spelling errors - a sign of mental maturation and personal growth - but I am going to stop seeing them as the piece of childhood I have always seen them as.

This forces me to look again at the boys, see them in the new light in which they shine.  To watch differently, perhaps more carefully, as they coalesce into the adolescents they will soon be.  It is easy to grasp the silliness and wonder and cuteness and color and cacophony of childhood.  It is, frankly, pretty easy to write about that all as well.  But now, as that layer begins to bury itself, a new layer of seriousness and work and purpose and understanding surfaces.  It is harder to write about.

But - to carry the miserable metaphor further - if they are willing to get the words right, understand the meanings, go deeper and further into themselves so, perhaps, must I...

Yeah... well, I hope you see my point.  Boys grow up.  It gets different.  And we must look at them anew from time to time and grow up alongside them.


But I'm not gonna do that right now.

Nope, I'm just gonna dive into the "take-home folder" (there's a label for that as well here) and see if I can find something silly.

Actually, on his test, Nick made a couple of drawings.  (On a side note, I asked him why - knowing that this would simply not have been acceptable when I was in fifth grade - he made them.  He said his teacher doesn't mind, "she knows I get bored with stuff I already know."  If only someone would have recognized that when I was his age I'd have not gotten into the trouble I did.  Thanks Mrs. C.)  I like this uh, sword-cross-stars-thingee, maybe there's a future in tattoo design for Nick: 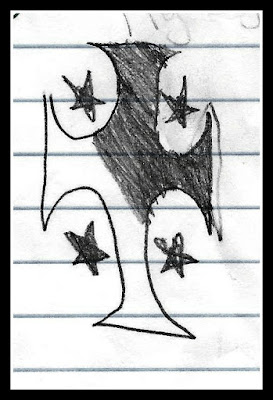 I love the yin/yang effect and who doesn't love stars?

And there is this little guy crouching absurdly on his spelling test: 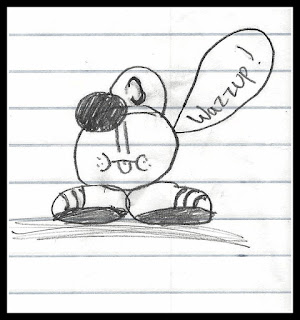 He plays for the "Backward C's"

How, you may ask, do I know he is crouching?  Well I found him on another bit of classwork standing up: 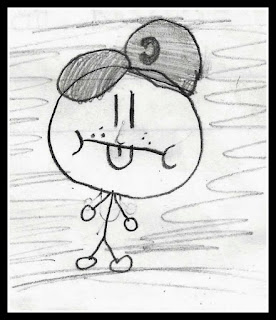 I'm pretty sure that's him, that signature tongue move is pretty unforgettable.

I found this one on a "Restating The Question Center" worksheet. 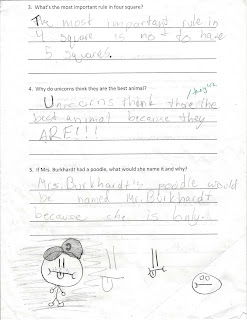 He nailed it on number three:

It's funny, for sure, but, behind it is a truth I think many adults miss, don't forget the obvious rules.  I'll save that thought for another time.  Also, I'll save the notion that it might be fun to write a post using all the words on Nick's list... that'd be joyous, marvelous, adventurous and inferential (dammit, you're gonna have to learn that one too, Nick.)

Thanks for stopping by, I know you're busy.

"Stabby weapons are best for me."


There one more thing I noticed on the worksheet.  I think it is a self-portrait: 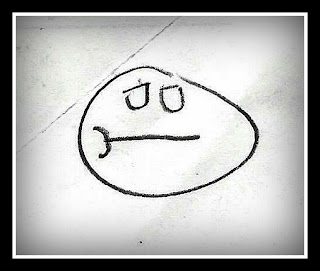 It is either that, or this is my fifth grade student picture.  You know what?  That's pretty much what middle school felt like to me, exactly the look on that face.  It's funny how it all comes 'round.


God's Peace to you all.