Bottle Buddies and Roses or There's Always Another Door


When the boys were given this assignment, they said they needed a "bottle buddy," all I could think was, well, don't we all...

As it turns out, a bottle buddy is not your drinkin' friend from college, no, it is the end result of a weeks long project on an inventor.  They researched and made informative posters and presented things and, well, they also made these: 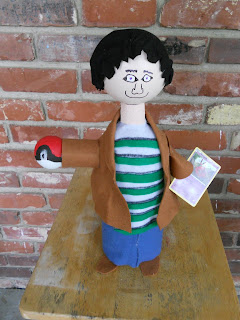 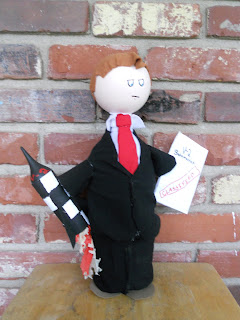 Obviously that is Wernher Magnus Maximilian, Freiherr von Braun there on the left and flanking him is his polar and profound opposite, Satoshi Tajiri.  Yes, the the pioneers and inventors of modern rocketry and, uh, Pokemon... respectively.
Weird.

I am tempted to scan the whole project of each boy and share it with you.  The messy cuteness - cute messiness - of it all.  They were working on different writing styles - informative, directional, descriptive, the like - and some of the sentences are very endearing.  They made little sort of placecards on the computers at school with cut and paste images and chosen fonts and curlicues and fireworks and smiley faces.

The whole project is a funny mix of cluelessness and purpose.  It will be a long while, I'd guess, before Nick really learns the whole story of his "V-2 dude" (yes, Nick did call him that as he was describing his project to a parent at their class presentation), from Nazi to NASA.  It's a helluva story, but one he wouldn't fully grasp right now.

It's also funny to note that Zack has really only a passing interest in Pokemon.  He has some cards and they battle each other, but, it's hardly obsessive or important to him.  They are more likely to battle with their own cards than play with the Pokemon cards.  Really, and I am hesitant to say this for fear it might embarrass him someday, I think he chose Tajiri because he thinks the creatures and such on the cards are "cute."  He likes cute things like stuffies and kittens and puppies and dragons.

I won't though, scan it all that is, and I'll tell you why - the pages are all laminated and won't freaking scan because of the shininess.  Either that, or I'm trying to do less of that sort of thing.  I dunno...


In a post a while back called Scrapel Guy, I showed this image of the last two roses of last summer that had been sitting in a window sill buried under, what?, stuff... I know, that's a terrible descriptor, but for this moment, it'll have to do.  The odd stamp had fallen out of a book I'd not opened in years.  At the time I felt the compelled to take a picture, probably because I didn't know how to tell the story. 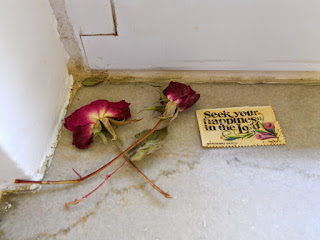 Just a couple of days ago, I felt again compelled to take this picture of the first two roses of summer this year: 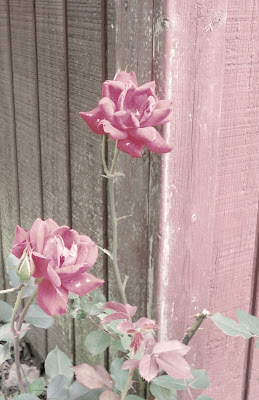 Beginnings.  Endings.  I struggle with both.  Maybe we all do.  Maybe we all like the safety and security, false perhaps, of the middle.  I know two boys, about ten, heading to a new school next year who are struggling with an ending and worried about a beginning yet to come.

Just a moment ago I said I didn't know how to tell this story, I am realizing right now that I perhaps didn't have all the story.  Maybe I do now.

The game had been lost, as have many this season, and only a few games remain.  Two days of school are all that sit now on the docket of fourth grade.  The boys are tired, sweetly so, sadly so, not mopey or whiny or weepy so, just tasting the rich fruit that is melancholy.

"Are you a little sad because things are coming to a close this year?" I ask Nick, on whose bed I sit, though Zack is listening from above.

"Yeah.  It's just that I'll miss my friends so much this summer.  That's it really, I know I did the work this year so I'll be ready when it starts again," his voice is little in the darkened, quiet room.

"They say that when one door closes another one opens," I lamely offer the tired aphorism.

A voice from the upper bunk asks, "What's that even supposed to mean?"

"Well, I guess it supposed to point out that even as one time or event ends, naturally another thing begins, it, uh... has to," I say.

"Well, like flowers turn to seeds and seeds turn to fruit and fruit turns to poop and then the seeds grow into a tree that grows more flowers again.  "Blossoms", is it?"

"What's that got to with doors?"  The cranky kid again.

"He's extending the metaphor, Zack.  Although I got a little lost at the poop part," I point out.  We may be getting off track.

"I guess I was thinking that before one thing can happen another thing has to happen before that," Nick adds.

"Right," I tell him, "Causality, it's called.  It's important in science and is basically what a plot is in writing."

"What if there isn't another door?"  Zack seems literally caught in a room with one door and it's closed behind him and he's tired.

"There's always another door, Zack," I tell him.  The phrase hangs heavy in the room for a moment.

"Yeah, I guess you just gotta look for it."  He pauses, thinking I'd guess.  I stand and put my hand on his shoulder as he continues.  "So, like, when the door closes behind us, when we leave school Wednesday - well, the door doesn't really close because they keep them open so we all don't have to open and close it out to where the buses are - we'll be done there.  And, like, at the end of the summer, when we go on to LIS, and walk through those doors for the first time - not really the first time, I mean, we had our tour there and the sports pictures are in the cafeteria there most times, unless we go outside, if it's nice - but, when we go through those doors, we'll be starting more learning and doing harder stuff - next year I think we start algebra and we need to type most of our homework and..."

Nick, who really must interrupt him sometimes, says:  "It's like we are seeds looking for a new place to blossom."

Nick has abandoned the doors and room metaphor and is going with his own.  Perhaps, he doesn't like the room between the doors, or that moment when both seem closed and the room is dark as is the room we are in now.

"Maybe we like carry a little bag of seeds with us as we go through the doors."  Nick's eyes are closed.

It does make a lot of sense.  We carry the seeds we've accumulated through every door we pass.  It's a good mixed metaphor, one I may extend someday.  But endings and beginnings are not my point here today.  Sure we are doing that, but, what I've noticed this year is that they seem to understand it more.

We are foolish as parents to think our children don't feel and experience life with great depth.  They do.  Sometimes, though, they need to find the vocabulary to describe it and as time passes they begin to.

And it is a beautiful thing to see this as we watch the children blossom.


Today is their last day.  Marci took a picture of us all (I guess it is a "selfie" but I hate that word, so self-indulgent and showoffy, so I'll not call it that) just before the doors of that elementary school bus opened, only to close again one last time in a few hours. 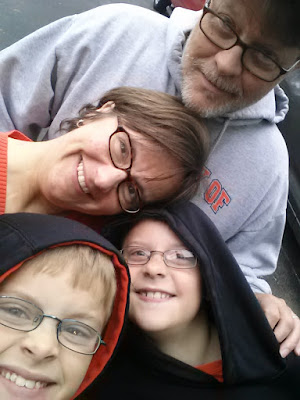 Thanks for opening the door today and planting yourself for a while.  I am glad you did.  Summer is busy and such here so I might not be around as much for the next few months.  I'll holler when I do.  Peace to you, as always.

(as a hymn kicks in at Mass)