I've heard James Taylor songs for as long as I can remember and I've played them for just a little bit less than that.  Just a couple of nights ago I was sad, there have been shootings and deaths in the news of late, and when I am sad and afraid I like to sing and play the songs that have long comforted me - Dylan and Croce and Taylor and Denver.  So, I sat on the porch and tried to sing away my sorrow.  I sang to the lightning bugs as the frogs and toads joined me in the choruses.

It was late, later than I should have probably been playing outside with so many homes so close, but the humid air trapped the words and melodies and kept them close, just me and the guitar and the words and the stillness.  I sang "Sweet Baby James" and the strings jangled sweetly, and the words, resting in the heavy air, hung even sweeter in the still night.  I wondered, as I finished, how many times I've played that song.  I wondered how many times it has given me its gift of calm and peace.  I wondered why it felt like a prayer to me.

JT has just released a new album of original music called Before This World.  It is not my place to say whether it is good or not.  I decided thirty or forty years ago that it would be, if that makes any sense.  I just finished listening to it.

In the song "Before This World / Jolly Springtime" James sings

(There is no punctuation in any of the official lyrics I can find for this song... I like that.)

I have been pretending, and still pretend, most likely, that I understand, that I have a deep understanding of the whys and hows of this existence, that I understand the very nature of love and sorrow and all those vague poetic words I cast about, arbitrarily capitalizing as though that were an act of holiness in itself.  I know, I've gotta lot of goddam nerve, right?

But, just as knowing a song well enough to sing it in the night to the stars and fireflies, pretending I understand comforts me, makes me feel less alone underneath those stars, less inferior to the perfection of that ancient bioluminescence.  I pretend to understand because it hurts less.  However, if I sing a song I know in the dark, I don't learn another.  If I pretend to understand, I stop trying to.

"Who can suppose he knows the way this goes?"  Not me.  But, I can box up every "if this" with a "then this" as pretty as you please.  'This is this way this had to happen because this had to happen next' is easy and, frankly, sophomoric thinking.  And yet, I fall into it.  Again, because it is easy and comforting.  If this painful ordeal, whatever it may be, will lead to something redemptive, then I will suffer it.  But that just makes me acquiescent, doesn't it?  Reactive, not proactive or even preactive.  It shrouds the necessity of change in the linens of my protestant predestination.  I accept and forget that I am the change I want to see.

No one can both inside and outside be

As Taylor sang those lines, the cello of Yo-Yo Ma and the harmonies of Sting lifted them out of the song and hung them on a hook in my mind.

You see, I try, I try to "both inside and outside be."  It is an unwieldy and heavy weight I burden myself with.  And, "no one can."

I can't presume to tell you your inside or outside.  The metaphor is broad-shouldered and will take whatever you can give it.  For me, my inside is where things are right.  It is the place I understand those lofty words, the place where purity and decency and integrity and honor wait in white rooms to show their very brightness.  It is where my library of understanding houses faith and resurrection and redemption.  Ironically, "inside" is where I assume to understand understanding.

But "outside" I am flawed hopelessly.  Not physically - that would be an endless litany - mind you, but in my perception of what is outside and how it can so purposefully besiege what I know is right inside.  From every angle it seems, I suffer a barrage of hatred and suffering and injustice that buckles me and scares me and makes me forget what is in the white rooms.  I know, inside my very soul, that there is decency and honor everywhere even as hearts are broken and lives destroyed.

I just can't seem to believe both at the same time.

This inside and outside dichotomy is at the very soul of my discontent.  There is an "insideness," if you will, that I see in some people - ordinary people, not monks and Dalai Lamas, philosophers or poets - no, in you, in my sons, that I admire and wish for.  There is also an "outsideness" that I see in ordinary people - not industrialists or world leaders, marketers or CEOs - as well.  Again in you, in Nick and Zack.  And again, I envy it.

This is, of course, a tired and probably pedestrian point.  It is ying and yang, good and bad, white and black.  It could be argued that this is all simply about balance and finding the place between my inside and my outside.  But that dilutes both.  I need to dwell in both places, I think we all do.

Boys do it well.

Nick is standing at the plate down a couple of strikes.  There are two outs and on every bag a runner stands.  He reaches for an outside pitch and sends a soft line drive over the second baseman's head and the center fielder rushes in and one-hops it.  He sends it quickly over to first for what looks like will be an easy out.  The first baseman, however, is watching Nick thunder towards him and is oblivious to the throw.  Barely missing his head the ball rolls lamely towards the fence but stays in play.

The first base coach sends Nick on, in fact the dust from all the runners is drifting toward the outfield.  One runner scores and another is about to.  The first baseman comes to his senses, grabs the ball and sends it, too quickly, to second where a boy eagerly awaits the opportunity to tag Nick out.  The ball misses his glove and ends up in the hands of the shortstop backing up the play.  He bumbles it in classic Little League fashion and Nick rounds second and heads for third.

The shortstop shoots for third and the ball hits and bounces toward the third baseman, another sure out.  But the ball somehow gets away from him now.  Nick is still up having ignored the slide sign from his coach who can tell that there is no stopping Nick now even though the ball is only a foot or two from the third baseman.

Nick races for home.  Three boys are plated and wait for the play.  There is no way he will score, the ball is in the hand of the third baseman now and Nick is still a good twenty feet from the plate.  The crowd is cheering and laughing, mostly laughing, caught up as only baseball can catch one, the boys are jumping up and down, Nick barrels onward in dusty determination.  The throw comes in, the catcher waits for it and...

From the outside this was a glorious moment, the crowd was cheering, the boys were screaming.  Everyone agreed that it had been "heads-up" base-running on Nick's part, four runs were marked on the diamond in the playbook.

But inside, inside, he knew it wasn't a grand slam.  He didn't want that credit, he didn't feel he deserved it and, God love him, amidst the cheering and high-fives and laughter and dust I heard him say, "I just got lucky," though he was smiling.  He continued to just say he got lucky as the congratulations continued both after the game and in subsequent conversations.  In fact, he calls it an "error slam" to this day.  Inside, in a place that is honesty, where integrity and character are waiting to come of age, he found himself denying what, on the outside, he could have taken as a moment of glory.  He understood both places.

Later in that same game, Zack had hit a solid grounder to short, and since he is fast, beat the throw to first.  At least that's what I saw - what everyone but the ump saw.  He shouted "Y'er out!"

Inside he made the outside thing better.

They won the game.. and the championship of their bracket. 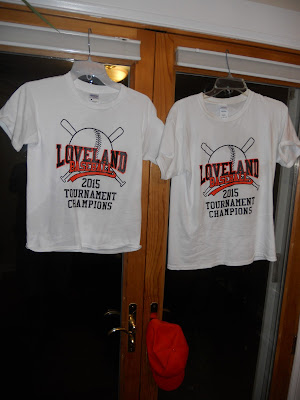 They won more though.  They won my admiration.  They are good boys, good champions, good sports.

But beyond that, I think, they taught me, as they always do, that one can "both inside and outside be," ya just gotta not think about it.

Thanks for being here today, with us, with me.  I must go.

"SCUBA actually stands for 'Someone Come Under, Bring Air'."

Peace to you all.