Some number of thousands of years ago a group of people lived together, harmoniously.  A few hundred at best, theirs was a difficult, dangerous and narrow existence.  They had not yet begun thinking about stars and gods and love and honor.  The seeds of bigger ideas of Art and Hope and Glory were yet to be sown in their Eden-like zeitgeist.  They called themselves The Tribe.

The Tribe had leaders and influential Elders and women were honored and children cherished.  The Tribe was sensibly located in a great forest, through which ran mighty rivers and the game was plentiful.  There were berries and seeds and nuts and the like.

One boy, we'll call him Skyflyer, was not very good at many things.  After he had gone through the ritual of becoming a man at the age of ten he began his apprenticeship in hunting and fishing.  He was a horrible hunter, loud and impulsive and far to silly for such an important endeavor.  His fishing was better but, he often lost track of time, letting the tender nets break from overfilling.

After a few frustrating and tiresome years, the men of The Tribe talked among themselves and decided to ask the oldest grandmother, a respected and beautiful woman known for her wisdom and mercy, if Skyflyer could be taught the ways of the women in the group, gathering, learning the special qualities of the plants and herbs around them, raising and protecting the young, dear children.  The old women, remembering another special boy, blind from birth, whom had been her companion when she was but a girl, said that she would give it a try.  The boy from her youth, although sightless, was willing to try the fruits and tubers the others were afraid to try and, in so doing, had added many foods to their primitive table, including the "honeywater" the men so adored.  She hoped Skyflyer could be helpful in a similar way.

After a while, the woman came back to the men and suggested they take him back.  She said he talked too much and irritated the other women and was too lax and playful with the children.  He would not pay attention to the chores at hand, always trying new ways when the old ways were just fine, forgetting the lesson of her childhood friend.

The men, respecting the old woman, said they would.  That night, under a full moon, beside a raging fire, the men discussed what should be done with this young, then just fourteen, man-boy in their midst.  Some said he should be banished, set out alone because of his differences and strange notions.  Some spoke of worse things.  Skyflyer heard them, entered into the dancing ring of light, and began to speak:

"It is true that I am not a great hunter.  I am clumsy and loud and so very slow.  But, when the beasts are slain I feel their pain, I know they have great spirits in them which we must respect.  I thank their spirits when we eat them and know I honor them.

"I haven't the patience for fishing, I know that.  I do know the fish are beasts of the water and I give thanks for them as well.  But, on the shores of the great river, hidden sometimes, is a soft and malleable earth.  With this I can make shapes: shapes of the animals and fish, bosoms of great mothers, the moon and the sun, which we could then hold in our hands.  With time, I believe I could make vessels, to hold our water in and brew our honey wine.

"I do not understand the ways of the earth, the plants and roots, how they grow and come again.  This is a cycle, I am sure, and, again, given time, I could understand it.  In the eye of my mind I can see how some plants could be intertwined, tightly, like vines, and made into holders or even cloth for our bodies.

And the Elder felt the boys' words in his heart, the grandmother wept at his words, the children wondered at his words.  The Elder asked if Skyflyer could tell them these stories.

The wise Elder said that he would have them.

The Tribe honored him because he remembered and revered their fallen fathers and mothers.  The Tribe loved him because he laughed and told silly, fantastic stories to the children in which were hidden the wisdom and wonder he had come to adore.  He knew the magic of childhood and the weight of age.  The Tribe cherished him because he thought deeply and justly about the things they knew not how to say.  He gave them a voice with which to cry and worship and sing and scream.

The Tribe still revers him, as best they can, so many generations - so many lifetimes - later.  For we are that Tribe and I am that boy.

I do not like crafts really, things never work with the pinterest perfection I had hoped for, but, that's okay.  When the boys were younger I used to put out muffin tins filled with paints and let them have at a piece of white poster board or colored construction paper.  I don't do that so much anymore.  Gone are the clay and PlayDoh, sand boxes, and foam cutouts glued haphazardly on random boxes and the like.  Of course, they always have their boxes of crayons and markers and colored pencils and scissors which they still use nearly everyday.  But, I don't really say to them it's time to do a craft, create something, dream something.

On Sunday the Ohio Autumn was calling me out into it and I took the boys along.  I explained what we were doing, we grabbed a bucket and headed to a favorite trail not far from home.  We gathered dried flowers and seeds and thistles, yellow and green and red and orange leaves, some bark and twigs and berries and roses and, well... here's what happened: 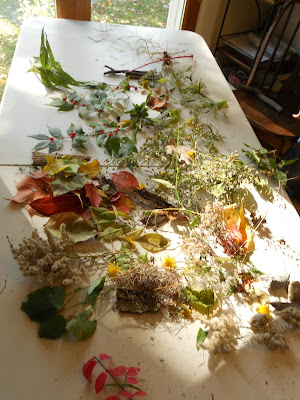 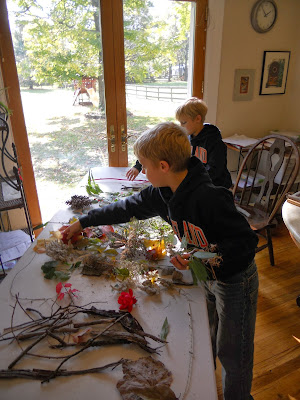 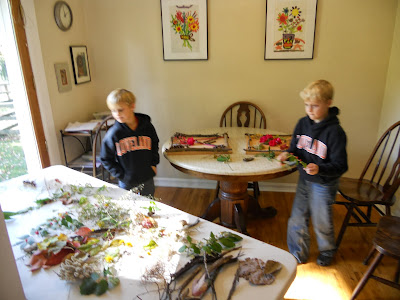 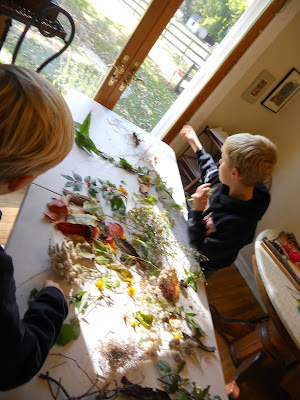 I had emphasized that the finished project was to be a photograph, an image of what they were making.  They were free to change it and manipulate it, start over or keep building up.  We even discussed the filter on the camera for "food" pictures and they really liked the "yellowy" one.

Never underestimate the creativity in anyone.  Don't even doubt it.  Proclaim it, honor it, praise it and celebrate it.  It is Love.  It is Spirit.  It is God.

From Marci's  ... things you don't expect to hear from the backseat ...

"He is a *very* stylish hedgehog."

Thanks for listening today, stop by again sometime, any time really, I appreciate it.