Do ya’ll know what a “sideman” is? I looked it up and I didn’t get a good feel for the word: “a supporting musician in a jazz band or rock group.” That’s really not enough, but I am sure I have layered my own connotations over this simple meaning, as one does.

When I was in my early teens, I tried to learn some Jim Croce songs since he was in the fashion of the times. “Operator,” “I’ve Got a Name” and “Time in a Bottle” are just a few of the tunes I tried to mimic.
I got them down alright, but I never really mastered them. I just assumed I didn’t have the skills to do them.

And then, in the late seventies, I saw Jim perform on a variety show with another guy. I was all, who’s that dude, and, as I watched, I came to understand he was doing the guitar heavy lifting and Jim was just strumming the rhythm. The realization came over my adolescent-addled mind like a storm, one of those, oh, ohhh, OH! moments. Yes, of course, I should have figured it out, but I hadn’t.

He was a long-haired, lanky guy named Maurice T. "Maury" Muehleisen. In fact, here they are together in what I think is the very show I was watching a repeat of. He was killed in the same plane crash that killed Croce and others.

Forward now ahead to the last few years. I’ve taken a strong interest in the songs and legends of the inimitable Guy Clark. I guess you could say I studied him and his music. I read a wonderful authorized biography of him by Tamara Saviano called Without Getting Killed or Caught: The Life and Music of Guy Clark. I watched a bunch of videos, many from his later years, and one fellow kept coming up, Verlon Thompson. I won’t go into the details of times and places; they aren’t necessary today.

But what is important is how he felt about his job. Over and over again, he states that it was the great honor and joy of his life to be Guy’s sideman. You can tell he means it as well. He took Guy’s death awfully hard, as you can imagine. He also wrote this song, “Sideman’s Dream” for Guy.

I did a lot of living between Maury and Verlon, but I’m not sure I was ever very far away from the idea of a sideman, a helper, a supporter, a “lifter” if you will.

I worked in restaurants for most of my life as a busboy, a waiter, and a bartender. I came early to the conclusion that my job was not about me, but to make others shine.

I never tried to upstage my guests, I always tried to make the whole experience about them. I cannot lie, this approach worked well, and I made a lot of money because of it. Others in the business, however, often were the star of their own show. Beautiful flirty waitresses, flamboyant gay waiters, Canadian dudes with “outrageous French accents”, stuffy sommeliers, overly enthusiastic hostesses and semi-celebrity chefs - they all fill the dining rooms of my memory, and I am sure their own styles worked well for them, but, it never felt genuine to me.

I spent most of my career in fine dining establishments most of which utilized a system of front- and back-waiters, especially for larger parties but often just on a regular night. In most cases, both could perform either role, but I preferred being a back-water. The front-waiter usually did all the talking and gave the “spiel” and took the order, though it helped if both remembered it, and basically ran the show.
The back-waiter took care of all the little details. When a guest left the table, I folded his napkin and, upon their return placed back in their lap. I made sure the Missus had a fish fork and the Mister a steak knife. I kept the water and wine glasses full, removed the salad or soup course, helped serve the entrees and lifted the cloches, and kept the whole thing rolling so the front waiter could look as cool and effortless as possible.

I loved it. I was useful and helpful and had every opportunity to be kind. I enjoyed the elegance and grace of it all. It was very dignified.

And there, I think, might be my point. There is dignity in every line of work that we all must recognize. I don’t want to list all the jobs that I think don’t get the dignity and appreciation they deserve - fabricate your own list - but I know everyone deserves my respect. Are there exceptions? I suppose so, maybe… not really.

In all those years back-serving I often was asked by a guest why I wasn’t a front-man, their assumption being that there was a hierarchy and that I seemed pretty good at it all. I’d smile and deflect, saying it was a pleasure to work behind John, Heidi or Sebastian or whoever. I never felt it stick in my craw though. We split the tip evenly and the work sharing seemed fair, so I just felt we were so-workers, team-workers.

Which, it occurs to me, might be a better point. No role is in any way subservient if it’s agreed upon that the goal and outcome serve the mutual need.

I return to Maury and Verlon and so many other great sidemen I’ve noticed over the years. After the initial thrill of the front-man and the excitement of a favorite song, I find my eyes and ears drifting to the sideman. A great guitar lead or a soaring fiddle solo, the studied beat of the drummer, the bassist soft and slow, the pianist’s quick arpeggio - all seem to lift the front-man, raising him higher than their singular talents. This would be the outcome of serving the mutual need: To present the song as perfect as possible.

One last, quick story and I’ll let you go.

I sometimes play and sing in a local bar called The Plain Folk Cafe of a Thursday night, open mic night. Now, I could write a novel about what I’ve observed in the goings-on there, but what most strikes me is the level of decency everyone offers each other. And these are different folks, with different geographical and social backgrounds, “hillbillies and hippies” my friend Ron once said. But this is no place to start a novel…

I know his name, but I haven’t asked him if I could use it (I didn't think Ron would mind), and, as a memoirist, I might not have all my facts correct or may have assumed things in my subjectivity that aren’t there. Anyway, he plays harmonica and is remarkably good. He sometimes sings and plays guitar but mostly he the house harmonica guy. Folks invite him up to play or he’ll play a bit as someone’s doing their set and they’ll ask him up. Which is what happened to me.

I was playing a tune, “Paradise” I remember, and I heard this plaintive call coming from close in the crowd, I saw him and motioned him up. He grabbed his harp case and hopped on up, playing the whole time, I might add. I’d really just started the song so after the second chorus I played a verse and chorus just on the guitar. A head bob to him and he understood instantly and took the melody on his harp.

He soared. Adding more, in all honesty, than I would in the subsequent verses. He found that lonesome, lost sound that mirrored the mood and sad beauty in those haunting Prine words. I was a bit gobsmacked and I think he was, too, at me giving him such a long solo, I barely knew him at the time.

I finished that song and did a few more ending with a song I’d written called “In a Little Boy's Soul”. Mind you, he could never have heard this song before, guaranteed. One chorus and verse in, he was playing it like he’d know it all his life. He really lifted my song, made it shine brighter. I will be always indebted to him for that.

We got off that stage and do you know what he said? “Thanks for letting me play with you. I truly enjoyed that.” And then he thanked me for giving him that lead and telling him what key the songs were in. He’d just transcended my set, made it better, you understand? He made it better. I thanked him, of course, and complimented his style and connectedness but he’d have none of it, genuinely humble.

He started to the bar to get a fresh Yuengling and I thanked him one last time, and then he said something that still echoes, “It was my honor.”

So, I guess that’s my advice today. Sometimes, you’ll be a sideman, sometimes you won’t, (and sometimes you just won't be sure), but I have found the most satisfaction in being one.

I am a sideman to you boys.

I am a sideman to my dear wife, Marci.

I’ve been a sideman to friends and musicians, chefs and CEOs, infants and the infirmed, priests and roofers.

And it has been, and shall forever be, my honor.

Peace and thanks for stopping by, I know things are pretty tough the days, I appreciate your time.


There's always more, isn't there?  Years ago, over ten I'd say, Marci had this mouse pad made for me. It's Zack holding the water fountain on as Nick gets a drink, they later reversed roles. 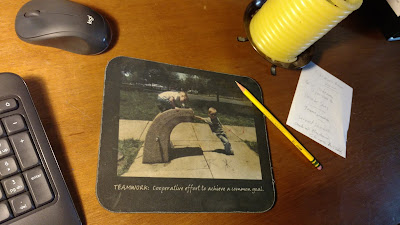 It's nice to have a sideman, ain't it boys?