Too Big For Your Britches


I learned long ago not to trust a basement.  Fundamentally, they are caves and, as such, they will always be prone to leaks and seepage and the mold and mildew that follow.  It's not the fault of the basement, I suspect we expect to much from a hole in the ground lined with concrete - eight or twelve inches of it to separate us from the ground, the dirt, the very soil and rock and worms and roots that have been crumbling us down for eons.  It's a lot to ask of a space.

In our basement, it is the north-west corner.  It leaks, probably as a result of the dogwood - the rather anemic dogwood - on the front of the house, it's too big to be so close to the house and I suspect the roots are wreaking havoc there at that corner.  It'd been an expensive fix but I'd rather not think about that, mostly because then I'd bore you with the details.

We put down old towels and frayed and bleach-stained bath mats to sop up the water.  I pulled a load of these towels and such out of the dryer the other day and realized a couple were old beach towels, swimming towels, whatever you want to call them.  The stripey ones we took to the Y where they had a couple years of swim lessons.  I can see them in their too-big suits, standing in the showers shivering then wrapping themselves in these towels.  I doubt they'd even drape their shoulders any more.

The two that match - the ones with cartoonish frogs wearing scuba masks - they took to our friend's lake house and played superheroes in them, later dragging them in the mud and sand.  The short ends are worn out and unraveling from it all.  I don't think they'd even make it halfway down their backs now.

It's all like that.  The "littles," the "smalls," the "boy's," the "kid's" are all being abandoned for larges and adult smalls.  The little Ikea cups, used those many years, are nearly forgotten.  The small divided plates can't hold enough waffles and fruit and yogurt anymore.  We are three gloves into baseball, I can use the ones they use now.  The tiny little gloves they first used I leave in the baseball bag holding memories but not back time.

Numbers are creeping into sizes.  Medium shirts and jackets are now 10-12, large tops out at 14.  And, something I noticed just a little while back, Nick has two pairs of Levi's that are size 27x27.  Grown up sizing right there.

I was a good-looking young man once, as hard as that might be to believe now, and I did some modeling in my twenties, runway work.  I thought I was the shit, but really, it was nothing.  On maybe my fourth or fifth gig a dresser told me that they kept asking me back because I was a standard size - 38R jacket, 9 shoes, medium shirt, and my pants size was 32x32, "thirty-two squared," I remember she said.

Thirty-two is just five away from those twenty-sevens Nick is wearing now.  Five inches between him now and the size I was as a young man.  For some reason that takes my breath away.

You know what?  I've got a pair of Levi's I went to college with, probably in (you'll know why when you see them), lets compare them to the ones Nick's sportin' now. 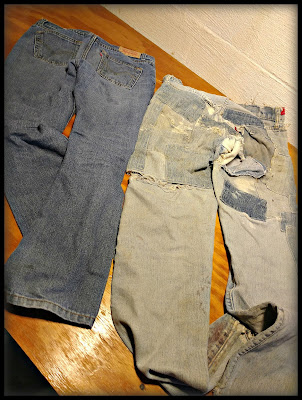 That's the back of them.  It's easy to tell Nick's are Levi's, the leather tag at the belt line is still fresh.  If you look real carefully on mine you'll see a speck of red on the right pocket. 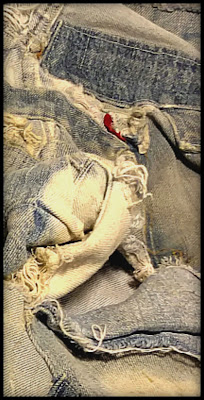 Yes, the pants are epic.  My Mom patched jeans with great skill and she just kept patching these.  In later years I would add hand-stitched ones, with far less skill.  I'll bet I wore these off and on for fifteen or more years.

Here's the front of them. 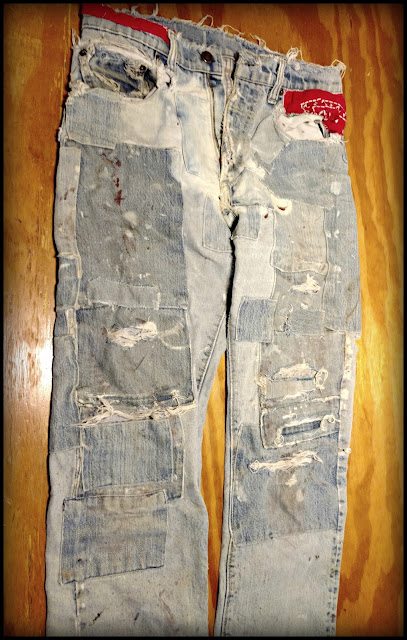 Fortunately, old patched jeans can't talk, but... they remember.  However, that's not what I'm getting at today.

I shouldn't tell you about the time I wore them to a wedding with a sharp white button-down, a nice reggie tie, Topsiders, and a tailored suit jacket - my date was pissed but the couple hundred strangers I left as friends thought they were a hoot.  I'll leave out the very flirtatious bridesmaid and the inebriated father-of-the-bride, who said something like "Why couldn't she marry someone like this guy?" pointing to me as he and his business partners all did shots I was pouring from a bottle  of Cuervo I found stashed below the "beer and wine only" bar.

I'll leave out how warm they were, like two pairs of jeans, and how many fires and whiskeys I may enjoyed in them.  Two girls tried to steal them from me; I made the mistake of washing them in the ocean on the southern coast of Crete where they dried stiff and salt-encrusted; once I left them (and a whole load of laundry) in a laundromat in Queens - I closed the bar next door and waited four hours, smoking cigarettes and dozing off, until they opened at six; but, these are all stories for another time.  Ask me about those jeans in ten or twenty years, boys.  Or look for a blog called, "britchesinstiches." NSFW, by the way.

Anyway, I got to wondering what size those old patched jeans were originally.  Levi's, because, well, Levi's, puts an inside label in their pants on the front pocket seam.  I dug around in them on what I was sure was a futile search. 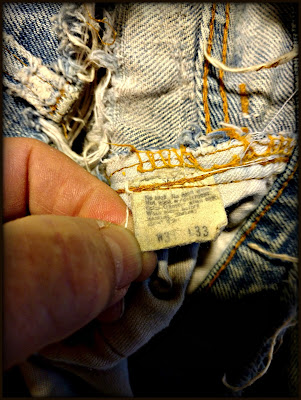 Thirty-one, thirty-threes.  I remember now.  They fit great with a pair of cowboy boots but I cuffed them when I was barefoot or in regular shoes.  Oh man, is this the pair of pants I caught fire because I used the cuff to stash a smoldering roach and when I got up the pant leg flamed up as it caught the breeze?  Yep, someone put it out with a beer.

(Again, a story for another time, which is a difficult subject for me... some of these stories are pretty fuckin' funny.)


There's an aphorism I grew up hearing and saying, it's not so prevalent now, "Don't get too big for your britches."  I'm not sure I really ever knew what it meant.  I mean, we used it to tell someone that, well, they weren't "the boss of me" - which I've heard the boys say - or as way to tell on a classmate, as in "Mrs. Faulkner, Jimmy's gettin' too big for his britches."  It was a sometimes gentle reminder to be cool, "Don't get too big for your britches, Earl Wayne," or a gross indictment of a person's character, "Betsy Jones was always too big for her britches."

Pointing out that someone might be too big for his or her pants implies that, someday, they will be.  I've been watching N and Z getting too big for their britches for years now, literally.  But what does it intone metaphorically?  Someone trying to do something they aren't ready for.  A little boy trying to tell a group of his friends they should all follow him to Mr. Poff's pond, when they knew he didn't know the way.  A ten year old saying he was big enough to drive the tractor, even though his foot couldn't engage the clutch.  A pimple-faced sophomore suggesting to the varsity quarterback that he run a sweep instead of the fullback up the middle thing which clearly wasn't working, and, where I was taking a wicked beating.

Maybe, again metaphorically, it means, like, "Hey, you gave it a shot, but you're not right ready for that."  It sidehandedly suggests, good job, maybe next time, it'll come.

I'd say a lot of my friends thought I was too big for those very britches above.  I'd say we all do it - taking leadership when it isn't ours, showing impatience where we should be more tolerant, bossing others when we shouldn't - but rarely is it done with misdemeanor aforethought.  In fact, sometimes it happens when we are trying to be useful but step out of bounds a bit.

I recently got too big for my britches, I was trying to help but it wasn't my place to do so.  I paid for it, I'd say, and, I learned a lesson.  Perhaps that's the ultimate purpose of the phrase, to remind us that we do make mistakes, we do try and fail, we do go out of bounds and what we learn from it is, in the end, what matters.

I'd suggest that it is a boy's job to get too big for his britches and, well, it's a man's to try not to.

You can write that down if you want to.  Frankly, it made more sense last night...  I wonder if writing overly long essays is simply a case of gettin' to big for my own britches?  I'll let time and memory sort that out.


Thanks for stopping by today.  I missed my Friday deadline last week and other-on-me is pissed.  I don't really care, dude's too big for his britches anyway.