Between Then And Now


The last time I was here I tried to explain my conflicting feelings of trepidation and excitement as I headed towards San Francisco and The Dad2.0 Summit.  I am back now but the feeling has not really gone away.  I have some stories to tell, some observations, a humorous anecdote or two, small things.

I was impressed at the food service at the hotel we stayed at.  (This is where I am supposed to use a "hashtag" and drop the name and tweet or something, I'm not going to, it won't matter in the long run.)  Breakfast and lunch were hot and tasty and fresh, well-prepared and presented, clearly created by caring professionals.

I happened to sit at a table three of the four meals I ate which was attended by the same waiter.  He was older, balding with a short cut around the gray edges, tall and kindly.  I always take a moment to thank those who serve me and I did as I left the room after the first breakfast.  We chatted a bit, I mentioned how nice everyone was.  He stood upright and spoke softly in an East Europe syntax and meter.  Finally, he smiled and, well, he took the empty coffee cup from my hand, looked me in the eye and said I needed another cup and proceeded to fill it and add two sugars and too much cream - just the way I like it.

I went into the ballroom to put my things down before the last lunch they were to serve.  I had a Coke and put it at a my place, turned to go, and there he was, a place-setting in his hand, a smile.  He set it down, patted me slightly on the shoulder and said that I'd have to carry one less thing this way.  He asked if I needed another drink.  I thanked him and said no and went out to get my lunch - a sliced chicken sandwich and the grilled skirt steak sandwich, a bag of the blue, sea-salt chips.  I'd eyed the cheesecake on a separate dessert table but I'd decided to come back for it.

As I was finishing up and talking with some people at the table he came by and took my plate.  A minute or so later he returned and said quietly to the side of my head, "I saw you wanting the cheesecake.  Have some."  He set down the plate, with a fork.

As I got up to leave I walked towards him, he smiled, and tilted his head.  I thanked him, noting his kindness and skill of anticipation.  Yes, the man, responded, it is an important skill, not for just work, but for life.  I agreed, recognizing his wisdom.  I asked if there was a dinner that evening with the beer reception.

"Sadly, no," he answered.  I said that that was too bad, mentioning that the city seemed expensive and I was feeling a little too worn-out to really have an adventure that evening.  I may have said I was a little afraid and overwhelmed.  I thanked him once again and shook his elegant hand.

There was time before anything else started and I wandered aimlessly looking at products I didn't really understand and speaking with men I understood all too well.  A while later I stood off to the side, alone, looking out on a floor of good men - in fact I was thinking that, thinking about how right and decent it all seemed when a voice said from beside me.

"I wrapped a couple of sandwiches for you, sir."

He handed me the linen napkin, I could feel the sandwiches were wrapped in film and a bag of ships crinkled - I was sure they were blue.

Grateful, I said, simply, "You are very kind, thank you."

He stood straighter for a second and said, "I heard you make speech, you are good man.  You are all good men, so many good fathers, good persons."

I tried to interrupt but he would not let me.

Of course I did.

"You make me remember good times of being Papa."

I wanted to hug him as I watched his eyes dampen slightly.  I wanted to say a million words to him and cry as many tears with him.  In a way we did, I knew the depth of his sorrow and he the depths of my gratitude.

A father says, it was not enough.

A son says it was.

He clasps his hand to my shoulder, squeezes it gently.  I want  more from him, more with him, but he's said his piece - found his peace.

I shake my head.  The gears of time recatch, lunging us forward.

"My pleasure, Mister," and he turns and walks towards the kitchen.

A son says thank you.

A father says it was a pleasure.

I'd planned more today, but Nick is sick.  I had to pick him up from school, so I am just going to wrap up here so I can sit on the couch with him and watch some Looney Tunes.

But, in a way, that is my point.  I spent three days with men on the vanguard of real change in societal attitudes towards dads - working dads, work at home dads, single dads, stay-at-home and long distance dads.  I spent three days with dads who, and this is important, consider fatherhood - theirs, ours; our father's, theirs.  I was left with a feeling of the bigness of it all.  The echoes of history and the winds of change seem unending and limitless, overwhelming.  I left with an unease as to how I could fit in the damn bigness of it all.  And then I realized that perhaps my place, your place, everyone's really, is between the bigger ones.

Maybe the best way to advocate for fatherhood is between the moving speeches and underneath the earnest, worthy words.

Maybe it is looking into the misty eyes of fatherhood, into the fearful eyes of childhood.

Maybe it is through a handshake, a hug, maybe in the cars and on the couches, maybe in the quiet of simple tenderness, maybe, maybe that is when we best and undeniably further our collective cause.  One small moment at a time.

Thanks for coming around today.  There was a piece of this I didn't get to write today.  I had an image ready - a church, thanks for asking - but, perhaps I'll get to it in another post.

I wish I had a piece of cheesecake...


Oh, and since you asked: 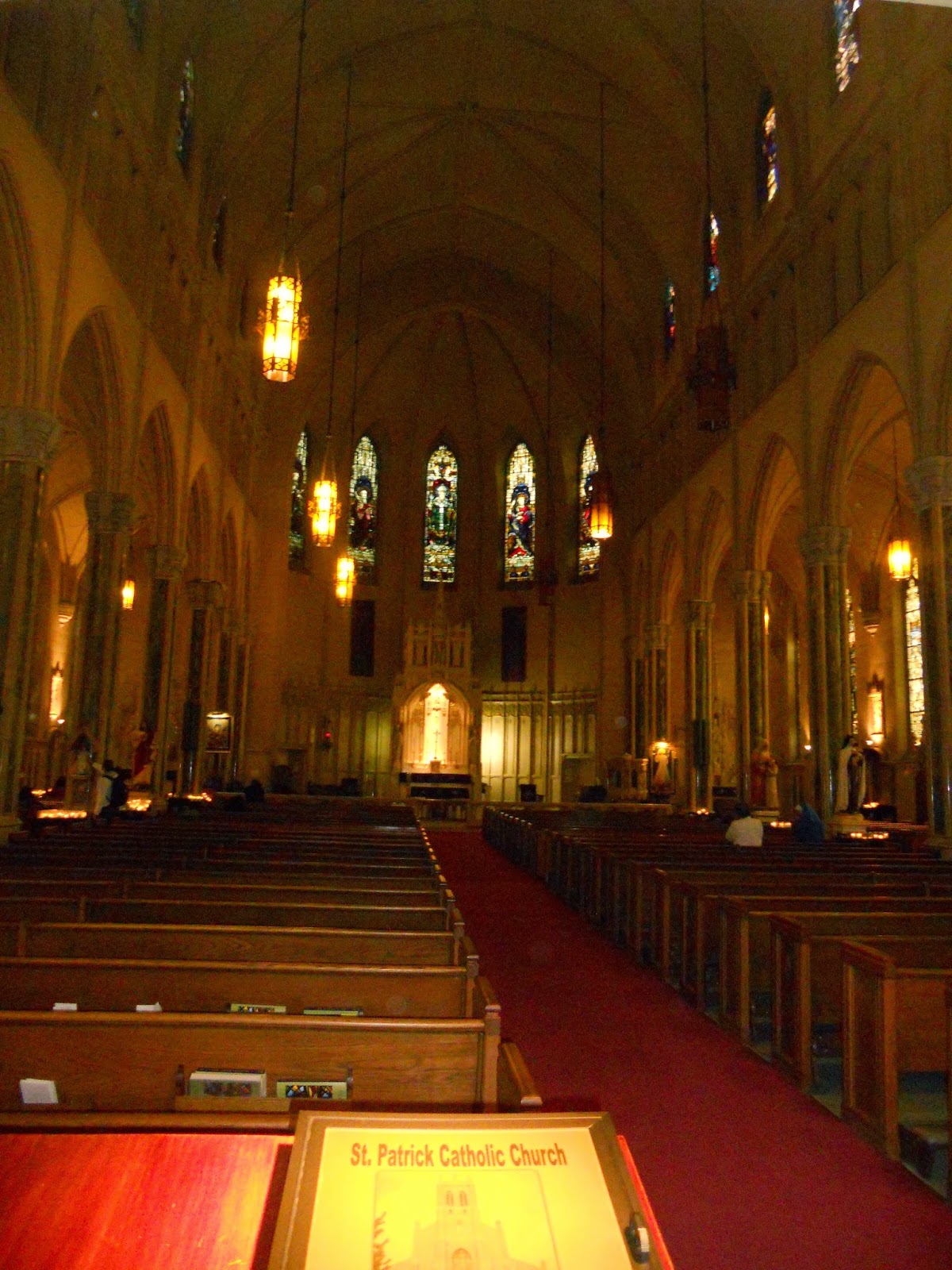 Just out of view there on the left is a statue of St. Joseph...  that's the story for another time.