Some of you may have noticed that, periodically,  I have trouble getting things started around here.  Often I can't decide what tone to take or which thing to begin with - happy or serious - or which picture I'll use or, well, you get it.

Today it's a no-brainer: 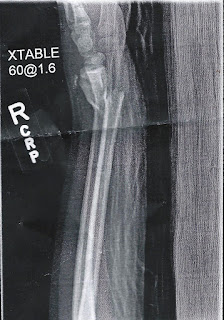 I wonder what you'd write about now, whoever you are, whenever you are?

Would you write about, oh, say, medical technologies?  All about the instant x-rays now available hospital- and network-wide.  When I was a kid I got an x-ray once, waited like two hours for it to be developed and then was told by a pretty pissed off tech that I had moved and that we'd have to start again.  Would you tell how the casts have changed so drastically, although the resetting of a displaced couple of bones hasn't changed much since, well, the Middle Ages?  So many colors of casts available, two if you'd like.  How soon he'll be in a waterproof cast, as oxymoronic as that might seem to anyone over fifty.

Maybe you would write, cleverly holding in your own pain, about how you knew the wrist was broken.  How it wasn't a question of whether to go to the hospital but to which hospital.  Would you mention the "S" shape his wrist was in and how you physically wince every time it flashes through your memory?  Would you mention the guilt boiling over inside you because you are the one who told them they could play on the shed and who leaned the palette up against the shed wall so carelessly, recklessly, stupidly?

Would you focus on the twin brother, his bravery and his empathy and his goodness as he thought to get a couple of stuffed animals to Nick for the ride from one hospital to the next?  His plea for "Bear-Bear" as you rode to the hospital in the first place and how it hurt you nearly as much as his brother's broken wrist. You might go on and on about the twinship they have, the love they so take for granted, the love we all so long for from siblings but don't always get.  You could describe the stuffed animal improvs they are having in their beds before bedtime since the accident, recently an aardvark with a broken snout speaking with a kindly buffalo doctor  as she explained procedures with simple care and decisiveness.  The tender sweetness of the dialogue which brought tears to your eyes, would you mention that?

Or, you might make a reference to time and jokingly say you didn't have time to finish this and then perhaps lament your lack of time to do the things you want to do and that the summer is coming and you may not continue posting and then... an image of a little boy who wouldn't wake up in the emergency room might hit you, a fear never before experienced, and you'd realize how petty and non-sensical are your worries and your wants compared to a black and orange cast and no bike rides.

On the up side, you might remember that even the boy-in-the-cast mentioned that it could have been a lot worse because he "almost busted my head on the fire pit, too."  You would, perhaps, show this picture and wait for the laugh, to cut the tension and stop the tears as they run down your face onto the desk below you: 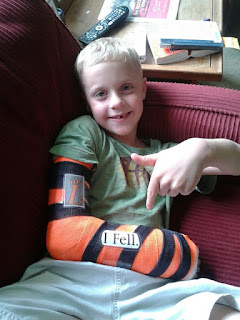 You might spend a lot of time trying to figure out how to go on from here.  Would you, maybe, vamp a bit about how irritated he was because people kept asking if it was for the Cincinnati Bengals, a team he has seen maybe four minutes playing in his entire life?  How his dear mother made him a Loveland "L" to go on it?  Would you banter a little about how he doesn't like to tell the story of the shed and the fall and all that?  How it is not clear exactly what happened out there, out of sight, behind the shed.  Would you mention how much that scares you?  Would you distract from that painful thought by mentioning the playful, wry look he gets on his face as he points to the "I Fell."

Would you speak of the human spirit, bravery, the mysteries of anatomy and pain and stress and humor?  Would you marvel at the kindness of strangers, caring doctors, loving grandparents, child care specialists and surgeons eager, willing and courageous enough to pull and bend and sweat to put a little boys arm bones back into the right place?

Would you have the moral fortitude to recall the faces of the parents in the waiting rooms and hallways of the E.R?  Ashen, sick children; stunned parents holding infants, scared and anxiously awaiting "the news" as some happy Disney show droned on.  Or would you choose to try and forget that side irony and go on with your own story, silently remembering that your heart said a prayer for them as you looked them in the eye and smiled?

You might write of many other things as well, but, what will I right about?


You see, although I think we all tell our kids that life isn't fair and that bad stuff happens, we forget that we are going to be the ones who have to explain it when it does.

It seems daily that Nick realizes yet another thing he won't be able to do and it breaks his heart, again.  Of course this all happened Memorial Day and, just two days later, he said to me, "Oh, Dad, I'd had such hopes for this summer."

We all know this is coming, we parents and makers of men; we all know they will suffer the unfairnesses that life so brutally and arbitrarily throws our way.  We get that.  However, watching an eight year-old boy work through it in his head is very difficult.  The other night he was watching something in my lap and his little face got all scrunched up and he sobbed a little and I asked him what was wrong.

I cried with him, cursing God and the unfairness of it all.  I held his face against mine as our tears fell together and I tried to protect him, but... I couldn't.

Send a 'hope' up for Nick, any way you like.

"This smells of turmoil."