It is difficult to explain a life, especially one's own.  You've only a fraction of the time that's past behind you to figure it out, it seems an insoluble equation.  And yet, here I am trying to do just that, explain a life, namely my own.

There are places - or are they times? - where you can see the all of something - the all of what you are allowed to see, at least - the completion.

I am never sure where a story begins or ends.  It is my great fault as a storyteller.  In linear time this all has a specific beginning on a stormy porch in Mason forty-some years ago.  But, my understanding of this all came staring down a bright fire, glass in hand, tear in eye, just the other night

Should I work backward to reach the spark that started it all or work forward to reveal the glowing embers of understanding?  I mentioned this is my great fault, didn't I?

You might remember the great screened in porch at the western end of the brick ranch I grew up in.  The porch looked off towards valleys and fields and barns and sunsets and storms.  Although I was initially afraid of storms, my dad explained the science - speed of light, speed of sound, the elegance of electricity's polarity, grounded lightning rods in the shape of roosters, decibels and candlepower, and wind sheer - and I came to appreciate them... sorta.

Summer storms often serve up a harbinger wind before they come in.  If you saw one coming in the distance, you could be sure that you could get a breeze on your salty, September sweat.

We saw a storm brewing off in the distance just south of the sun hurrying down.  It was after dinner and Dad and I went out on the porch to catch the breeze see what might come of it.

But, that storm stalled, not a mile away, and that early breeze whispered off.  The storm just sat, each threatening cloud roiling and lifting upwards and back into itself like gray cotton candy.  Right at the line where it all fell back into itself in deeper grays and blacks, the lightning flashed bright white, the blue shadows flashed in the clouds like steel buttresses supporting the tall thunderheads.  And, it sat there like a cathedral, ominous and sacred.

Dad stood, a scotch on the rail, a pipe in his mouth, cupping a match, not against the wind, but out of habit, ritual.  He gazed out, puffing, grey smoke matching the sky.

He said it to me, or the storm, or himself.

Suddenly, the citadel of a storm fell, and it roared on towards us, picking up speed, intensifying - aiming, it almost seemed.  The lightning blinded, the thunder deafened, the rain pelted.  Trees bent in the wind like supplicants in the strobe flashes from the nearly constant lightning.

I looked at my dad and I understood something for the first time.  He stood, pipe clenched between his teeth, head high, back straight, scotch secure in hand, laughing at it all.  His face was wet and his glasses were dotted with rain.  He looked wild and happy and I understood that wildness was for everyone - not just for boys.

"... a long time comin,'" he shouted above the storm, elongating the word like a wolf's howl.  I understood his inference even in the crazy wind and din of the storm - it is worth waiting and it will be rewarded.  The longer the wait, the better.  Stillness begets wildness.

I sit here now and try to figure how old I may have been in this scene.  It's funny, sometimes rich details and emotion can obscure the edges of a memory, render it timeless, frameless.  It is also funny that - and, you know, this just occurred to me, and it feels important - you don't really see yourself in your memories, you're not on the stage, you are both audience and narrator.  So, I can't see which glasses I had on or whether my cheeks were chubby or thin or what shoes I has wearing.

I'm gonna guess eleven or twelve, a little older than my boys are now.


I have long employed storms and weather and seasons in my storytelling.  Not always as the central theme or central image, but, often enough.

Four, maybe, years later I decided that I would take a shot at writing a song.  I was enamored of the singer-songwriters that I was listening to - Croce, Taylor, Denver, Lightfoot, Prine, Clark, and, of course, Dylan - and felt I could.

It is not a very good song. 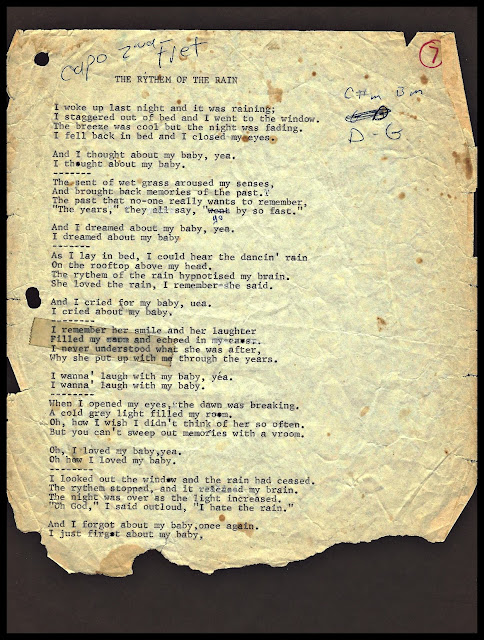 I'd guess I typed it up on my mom's IBM Selectric in 1976 or '77.  I haven't seen this in years and I haven't played it in decades... well, until just now, I sorta felt I had to.  I suppose I could tell you some more details about it, but, examining teenage angst and sophomoric lyrics is not my reason for showing this.  No, it's the rain imagery.

Ten, eleven, years later I was living in New York City, Queens, and I decided to have a go at poetry.  I wrote, among others, this poem: 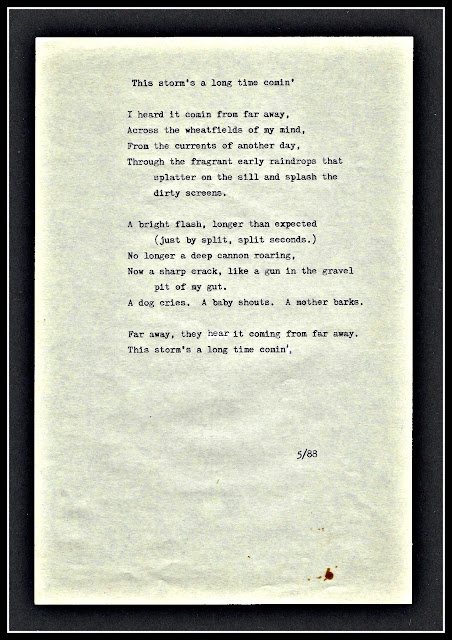 It's not a very good poem.  Again, not the point.  I remember writing it in an apartment in Astoria watching a storm come up.  My makeshift desk looked out upon the cityscape - the backside of it, in honestly.  The alleys and antennas and clotheslines and water tanks and buildings and buildings and buildings, so different than the fields and woods of home.  But, the wind blew through the screens and whipped the rain like wheat fields, the lightning cracked and flashed blue high in the high Ohio Valley thunderheads, and, well, it all mixed up in my head.  I saw the metaphor of it all, the ones my dad had alluded to - storms and life and anticipation, fear and hope, time and stillness, the calm, the wild.


Let's move on down - or up or across or through - the timeline to 1997.  I lived in a nice little, pastel yellow two-family house in Oakley, on Brazee Avenue, as I recall.  I had the bottom apartment.  It was a funny little setup; a living-room, a small bedroom, a kitchen along the back with a small cement porch and, a peculiarly large dining-room with a bay window that looked out upon nothing but a driveway and my neighbor's kitchen.

I had a desk - a door spanning two black filing cabinets - against one wall and a fairly large dining-room table in the unnecessary bay window.  The desk held the first computer I'd ever owned and a printer with which I'd just finished writing the novel I'd spent a year on.  It - the novel - sat waiting for whatever was next.  I didn't know... I still don't.

Painting in acrylics had long been something I dabbled in.  Poorly conceived, bright, unapologetic abstracts; big, clownish, ungainly things.  I had a closet full of them.  I knew they weren't very good, but I genuinely enjoyed the thought and effort and craft of it all and, well, before the internet, a fellow had a lot of time on his hands.  I am forever grateful for that time.

I liked thick, right-off-the-palette-knife strokes and I'd been working on two dark and stormy canvasses.  I would paint something over them, I wasn't sure what.

I took care of the lawn at this little house and the mower was in the two car garage out back.  It was a derelict old building and the cars stayed away.  There was a lot of junk crowded into it, boxes and old furniture, mystery items, defunct lawn chairs... you know.  That afternoon I noticed a wooden bin built into the far back corner of the garage.  What looked like wooden frames were sticking out of it in different sizes.  I'd been painting earlier that morning and I thought, incorrectly, that they might be canvasses.

It was all the old storm and screen windows for the house, windows long ago replaced by new double-paned ones of plastic and vinyl.  The glass storm windows were mostly cracked or missing the glass altogether.  The screens were broken and torn, old patches bending off, rusting and crumbling as screens will untended.  I wondered why they were still here - they seemed so purposeless.

In the center of the the rack one screen rose taller than the others.  I pulled it out and it all came to me at once.  It was fairly intact, only rusting around the bottom edge.  It was thick with grime and mouse droppings and dust turned to dirt over time.

I didn't get the lawn mowed that day, not for a couple.  I cleaned the screen up and painted it black and hand lettered the words to a poem, blowing them up, line by line on the computer, and printing the templates and mounting them on the underside of the screen and, carefully, stroke by stroke, painting the words in titanium white.  I used the words to the poem I told you about earlier.

I worked hard on it, devoted way too much time to it, and when I finished, I hung the whole thing on a wall in the oversized dining-room.  People liked it.  I liked it.  It was up at the apartment I moved to from that one, the one where I met Marci, and we had it in what would become the boys' room when we moved into this house.  It's been in the basement since they were born.


Remember earlier when I asked should I work forwards or back?  Well, this is where I'd have started if I'd've gone the other way.

Recently, an old friend of mine mentioned it: "... do you remember a screen you had on which you'd stenciled the words to a poem? Any chance you remember the poem? Was it one of yours"

I do, dear soul, and, yes, it was one of mine.  And thank you from the bottom of my soul for remembering it, for reminding me of it, for returning it to its place in this story... my story.

I got it out to show you, to show my thoughtful companion, to show Nick and Zack, to show myself.  I couldn't find a wall to accommodate it.  I tried setting it up on the floor but I couldn't get a good picture of it.  I finally looked outside, the wind was whipping up, storm clouds grayed the sky and the shed called to me, as sheds so often do... 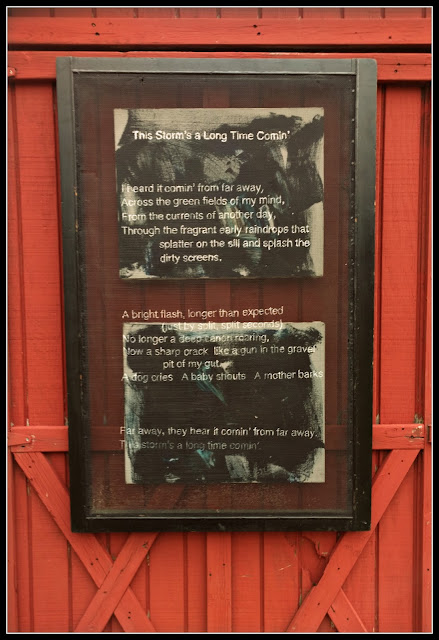 So, that's it.  That's the "all" of it.  Stories spiraling backwards twisting with those going forward, like a double helix, meeting here and there, sharing, mingling, entwining with one another, forming a whole...

Listen, life is the long game.  Life is in the waiting, in the spaces between the words, between the notes, between the breaths.  The best storms are a long time coming.  I'm glad for that.


Peace to you.  I've kept you far too long, I know you must be running off.  Thanks for stopping by.