I've been having nightmares, dreams of loss and separation.  In one, Nick and Zack are on one side of a tunnel busy with traffic and I, on the other side, am unable to cross and am so afraid they will try to get to me.  I scream and scream but the roar of the traffic renders me mute and I'm left wondering if I still can make a sound.  In another, Marci is waving to me from a tower, a tall parapet, I'd say.  She looks happy and yet the stone of the tower is shifting to sand and it begins to tilt towards its inevitable destruction.

There are others, some in which I am searching, sometimes for the  boys, often for Marci.  In some the search seems almost like a chase scene, I get to where I am sure I should be and the thing I so desperately need is no longer there but I sense again where it is and am frantically off to where I know I will get it next time.

Some of the dreams are scarier, underscored in a tone of violence, where loss and searching yield to darker themes.  I'd rather not think of them.

Well, the first part is easy.  I think of "you" as the audience I have that might see this in real time, like, today or later in the week, and, honestly, your numbers are only a few dozen and you are all kind and sympathetic folks who I don't feel will be to judgy.

Why am I telling me this?  Frankly, I'm hoping voicing them might help them go away.

And the boys?  Yeah, that's the hard one.  I'd like to say that, perhaps some day, when they might be confused and laid vulnerable to life's confusion and uncertainty, they might come upon this here and my honesty will touch them.  Wishful thinking is my specialty.


"You don't just throw away someone else's broken heart," I said as Zack headed into the kitchen.

You see, the cat got up on the fireplace mantel and was heading towards the Nativity scene.  Z went to get her off before any further mischief could begin.  As he pulled her into his arms, Marci's little carved flat stone heart, marble I think, got pulled off and fell to the only tile in the room, the small area in front of the fireplace.  It landed with a thwack and a skitter, skitter.  I knew without looking it was in pieces.

Zack gathered them up.  He felt bad for breaking it.  He knew it wasn't his fault.  He went to throw it away, eager to get rid of the evidence.

"Whaddya gonna do with 'em," Nick asked from the couch where he'd been watching.

"I think I can fix it.  Just put them back on the mantel, Zack, I'll look at it later," I was fairly confident I could. 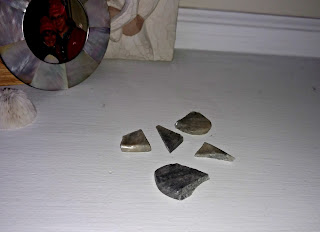 It's been an hour or more and, well, it turns out I can't.


The day after the election we were waiting for the bus out front and we noticed this: 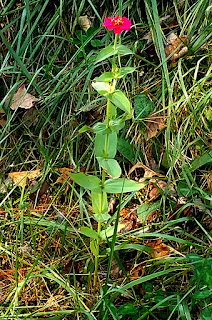 It's a little wildflower blooming in the ditch in front of our house.  I don't like that ditch.  I can't get in to mow it, its sides are too sharp and I don't own - nor can I use - a string-trimmer, so the ditch gets full of weeds and tall grass.  Earlier in the year the township had come through and trimmed all the culverts and such on our road.  I raked the tall grass trimmings out and, on a whim, Marci planted a packet of mixed wildflower seeds.  I think we both imagined a ditch bouquet of blooms and blossoms, transforming the unsightly scar in the front yard into a colorful carpet of whimsy.

That didn't happen.  The grass and weeds came back and the ditch remained, well, unsightly.  And yet, so very late in the year, we see this brave little flower, variety unbeknownst, reaching out over the wilting grass and withering weeds.


Recently, I've been trying to find the meaning in more things.  I am not one to regret - which pleases me... which I regret - and I've often wondered why.  It turns out that pretty soon after something happens, say I make a bad decision, say the wrong thing, fuck up, I see what I am supposed to learn from it.  These are, historically, not revelations to be celebrated.  Conversely, when I make the right move, make a good decision, say the right thing, not fuck up, I also try to see what I should learn there.  Oddly, these are not celebratory moments either, more a reminder that I should always do the right thing and not be a dick.  Somehow, these sometimes painful insights have led to an understanding that leads to a lack of regret.  But, I have a secret to tell you, I have, my whole life, felt, well, guided.

So what sort of Guide wishes me bad dreams or broken hearts?  Who would frighten me so manifestly that I wake up in sweat and tears, a silent scream in my throat?  Who would have the audacity to remind me that sometimes hearts go unmended?

The same one that puts a wildflower in a ditch.  And that one flower is the whole carpet we dreamed of, the whole ditch abloom, it is our hope fulfilled because the joy was in the hoping, not in what we were hoping for.

Well, wish me a dream where I find my sons, where I rescue my love, where I mend hearts.
Wish me the hope of future fields of fresh flowers.

I wish you peace.